It does come as somewhat of a surprise that the very politician who stood against the big banks and Big Tech when campaigning for the 2020 elections would emerge as an opponent of cryptocurrencies, but here we are. … 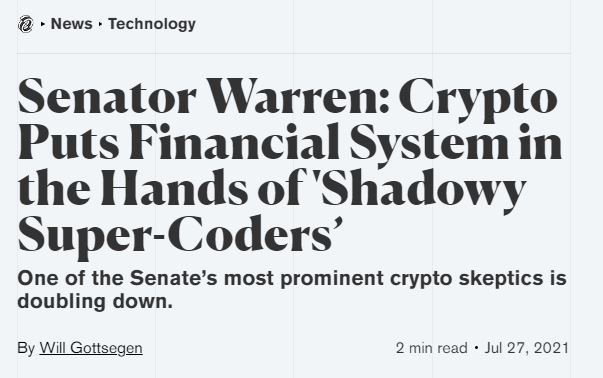 You gotta admit that if we disregard the intention of her comments for a moment, the term “shadowy” “super-coders” does kind of have a nice ring to it.

I’m thanking Decrypt for the catchy headline of course.

The full quote would be what Sen. Elizabeth Warren seemingly read off the notes in front of her…

The comment was made at a Senate hearing yesterday titled “Cryptocurrencies: What are they good for?”

Sure, there were several people at the hearing who expressed positive views on decentralized currency, but even the name of this hearing seems like bad news.

What I mean is they are asking questions as if our industry poses some sort of threat to financial stability.

Now, the answer to that will largely depend on your definition of financial stability. If you mean the status quo, then yes. They probably should be pretty scared.

However, Warren’s comments here do indicate that she doesn’t really understand decentralization, or is being fed bad information.

The trust that people have in cryptocurrencies is not about the coders, it’s about the code. And open-source, verifiable code does not have whims.

As a staunch reminder of how whims work, today is Federal Reserve day, and as I write, my top right monitor is streaming the meeting live in which Fed Chair Jerome Powell does his best to try and explain why, when the economy is on track, the markets are through the roof, and everyone who needs liquidity can access it, they are still printing $120 billion every month.

The question of when interest rates might finally be raised has been dusted aside yet again as the Fed clarifies their roadmap.

First they start to gradually reduce the amount of money being printed each month, most likely in December, then they’ll start talking about a “lift off.”

One valuable thing that is coming out of this meeting is some further clarification on what Fed officials mean when they say that inflation is transitory.

It’s been a topic of great interest lately, as evidenced by Google Trends data for the word “transitory” in the U.S. 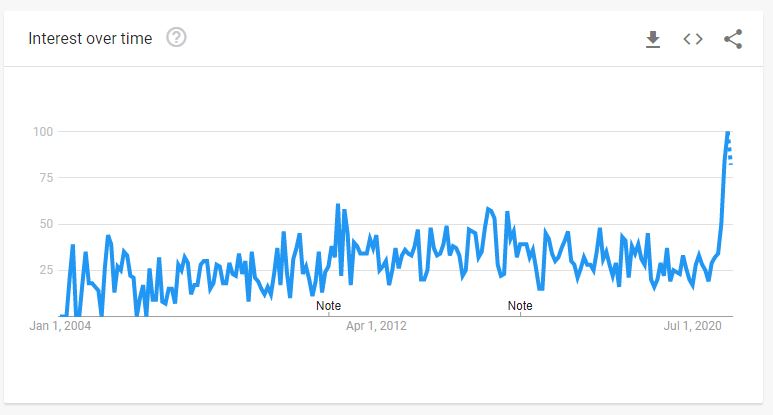 So today, the Fed has said that they don’t mean that prices will fall, but that the rate of inflation will not keep rising persistently.

It’s really good to get this clarification now, just after the Fed’s previous expectations on inflation have been mutilated.

It’s no wonder some are calling this “one of the most confusing Fed press conferences.”

Crypto markets are having a good day, and bitcoin is doing a fairly good job of staying above $40,000, given how quick we’ve risen to this resistance.

What’s more important is that the trading volumes remain elevated.

Specifically, when it comes to on-chain bitcoin volumes, we can observe a lot of activity.

Not sure if there’s any single explanation, but the Bitcoin Block Bot has registered dozens of hundred-million-dollar transactions today.

There’s no telling what this might mean, whether it’s a single entity reorganizing their books or just strong over-the counter (OTC) activity across the market.

We may never know, but in my mind, it can only be bullish.