Another day another dismal record. This one comes from the US Department of Labor who reported that 3.28 million new people filed for unemployment this past week. That’s more than five times the previous record.

I know that we’re supposed to be flattening the curve by staying home but I don’t think this was the exact intention. Here we can see the last 50 years worth of unemployment data looks flat in comparison with today’s figure. 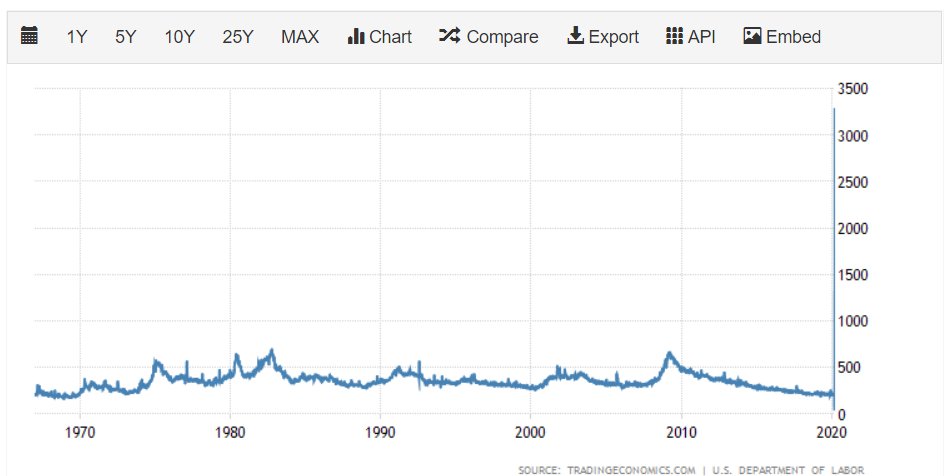 The stock markets however, have chosen to ignore the jobless data completely and are forging higher today. It’s kind of difficult for asset prices to fall when the Fed is willing to step in and buy everything.

Also sending stocks higher today is the prospect of the fiscal stimulus package which is now making it’s way through the US government system. Last night, the $2.2 trillion bill passed the Senate with a unanimous vote. It’s expected to go through the House tomorrow just as easily, then on to the President’s desk for signing.

Included in the bill is $500 billion for big businesses, $350 billion for low interest loans to small businesses, $100 billion in grants for hospitals and health care, and $1,200 worth of helicopter money for every man and woman with an annual income below $75,000 and $500 per child.

According to an analyst I overheard this morning the total amount of stimulus being added to the global economy is roughly equal to the entire economy of Japan, the world’s third largest country by GDP. It almost seems magical that world leaders are able to conjure up that much value.

As we’ve shown above, there’s a lot of people out of work at the moment so let’s hope that this clever accounting is able to alleviate some of that pain. The US hopes to reassess the situation and possibly offer another package within the next 60 days. It’s certainly going to be a brutal earnings season.

The price of bitcoin seems to have stabilized somewhat, as have the volumes, but the hashrate is getting crushed at the moment.

The total amount of computing power that is contributing to secure the network is down about 23% from the peak on March 8th. Mati Greenspan Click to tweet

Not that I’m using the 7 day average, simply because hashrate calculations can be quite volatile and unreliable when using short term data.

What does this mean?

Not much actually. We know that a lot of miners were running some old machines that were barely profitable before the price crashed. Had the price maintained above $8,000 they probably would have run those machines right up to the halving, but now with the price around $6,600 it just doesn’t make sense to keep those machines on.

It’s important to note that we were expecting some sort of miner capitulation after the halving event. The fact that it’s come a bit early is really of little significance. As you you can see from the above graph, the overall hashrate has just about doubled over the last year, even if we include this latest hash crash. So the network is quite secure.

So, we can probably conclude that the hashrate coming down is actually a result of the price crash and not something that is likely to cause further price declines.