The thing about the news cycle is that frequently enough, very big things can slip under the rug, often times because something that’s perceived as being bigger happens at the same time.

In yesterday’s BMJ newsletter we discussed this story, which has now seen proper coverage on Forbes. …

The rest of the mainstream media haven’t picked up on it yet, but I suppose that’s perfectly understandable, given everything that’s been going on lately.

In turn, it seems there’s another bit of news that could also have tremendous implications for the world of digital assets that’s may have been missed due to the Visa and Mastercard announcements. 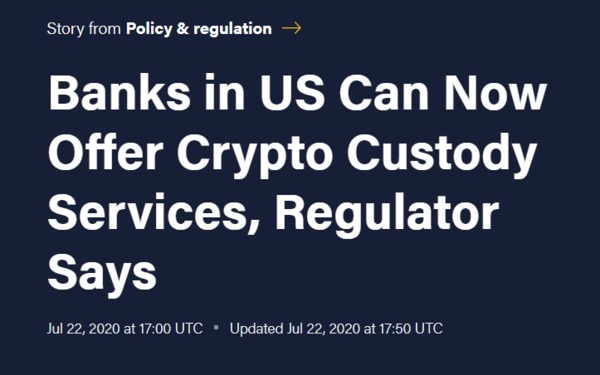 This is part of a wider story that points to a much more crypto-friendly United States. The move was enacted by Brian Brooks, acting comptroller of the currency, whom we covered earlier this month in this short explanatory video.

Banks in the U.S. are now officially allowed to custody digital assets, and the three main payment processors [Visa, MasterCard, and Paypal] are all beefing up their crypto offerings. Mati Greenspan Click to tweet

As far as fundamentals are concerned, this is about as bullish as it gets for bitcoin and the gang.

Over the weekend the provisions that were set forth in the original coronavirus CARES Act are set to expire. Back in March when it was implemented, four months of effusive stimulus seemed more than adequate.

Today however, it’s quite clear that many people are still out of a job due to the rolling lockdowns and are in need of government aid for their basic sustenance.

Another thing that was present in March was a deep desire from government officials to get together, and an air of cooperation that has weakened substantially since then.

We’ve seen countless times how governments like to bring things like this down to the wire, and it seems that the more important the decision, the more it gets delayed.

This is precisely why most political analysts fully expect that some sort of patchwork extension is about to come out of Washington, the old politician playbook of kicking the can down road.

It’s clear that Republicans are quite concerned that the current level of stimulus might be giving some people incentive to avoid going back to work, which is obviously not a very good situation. However, the evidence shows that this is probably not as big an issue as they’re making it out to be.

As we can see from the results of this survey done by Morning Consult, a majority of participants are receiving less than they would from working or haven’t gotten paid at all. 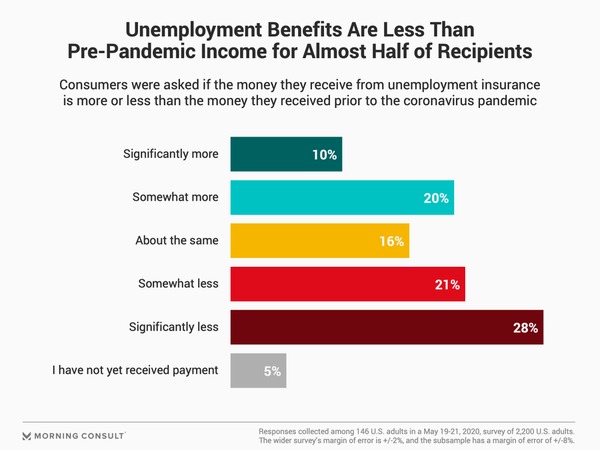 Of course, the sample size of the survey is not nearly large enough to grasp the complexity of the entire country, and the margin of error is rather wide, but at least it shows that these sort of concerns may have been a bit overblown.

Besides, there really doesn’t seem to be much danger in giving people incentive to avoid working when there isn’t any work to do.

What the Markets are Doing

Well, things are pretty hectic at the moment. While Fridays are often a bit of a mess, this Friday is understandably a lot worse than normal. Stocks were hammered in the Asian session and dropped in Europe, and the U.S. market isn’t doing any better.

The bitter jobless claims data from earlier this week is obviously a major concern for many investors.

Volatility is up sharply but so are the bonds, whose yields continue to plummet. However, nothing is up quite as much as gold, which has punctured the resistance level of $1,900 and is looking to break a new all time high ($1,923 per ounce), possibly within the next week, or even today depending on how things go.

I must admit that my decision to sit and wait for a larger pullback before going in more heavily on gold doesn’t seem like the best move I’ve made lately. Oh well, it’s not the end of the world.