Another brutal fight broke out in Hong Kong parliament this morning. Footage has emerged from the chaotic scene as the pro-China party physically took position of an empty seat in the house with the help of some hired body guards.

Now, we’re not gonna get into the HK political charter too deeply here, it’s actually not a subject that I’m qualified to comment on. I just wanted to point out that nearly every man and woman in that room, no matter what their political affiliation may be, is wearing a mask, correctly covering their mouth and nose in orhttps://www.bloomberg.com/news/articles/2020-05-18/xi-to-address-key-who-meeting-face-angry-virus-hit-nationsder to curb the spread of COVID-19.

This is in stark contrast to other countries, where the use of masks is shunned by some, with biases for or against their usage often falling along political party lines. Perhaps that’s why there have only been a total of 1,025 confirmed cases of Coronavirus in Hong Kong and only four casualties.

Today, the World Health Organization will have their first global meeting since the virus started. The event is sure to be quite the spectacle. Ahead of the event, China has used it to strengthen their leash on Taiwan , and the Trump administration has blamed China for intentionally spreading the virus, in a bid to position the upcoming November election as a referendum on the East Asian nation.

The stock markets, of course, have chosen to ignore the geopolitical drama completely and are instead rallying. The main factor being reported is…

Of course, we’ve spoken so many times about how the financial media enjoys placing a narrative behind every price movement. The real reason stocks are rising today is because of overwhelming Fed support, but that doesn’t make for nearly as neat a headline.

If easing optimism were really driving the markets, then we probably would have seen a full risk-on trading environment. Instead, we see gold rising to its highest level since 2012. Mati Greenspan Click to tweet

A move that points to global uncertainty and fear. It’s not far off its all-time high now. 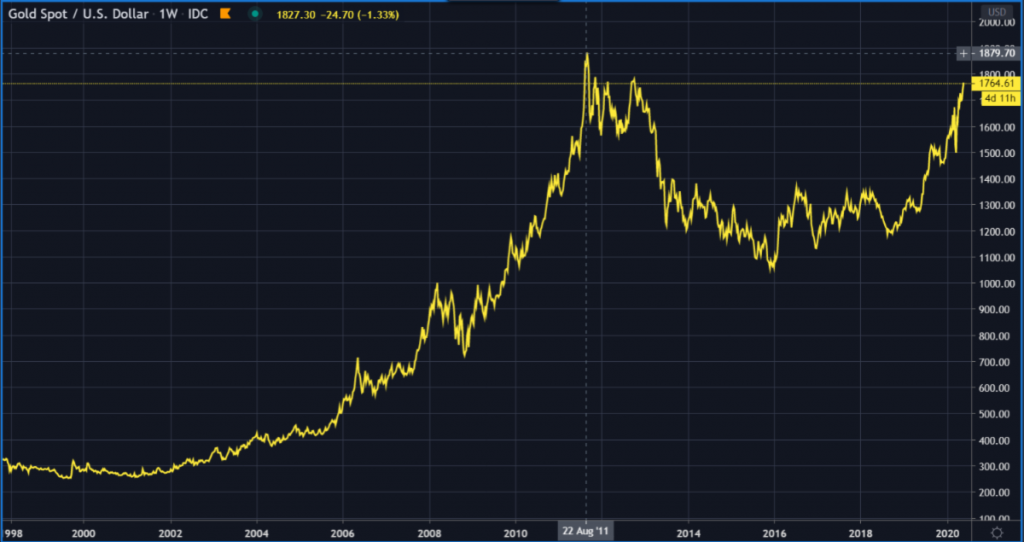 One man who’s not buying into all the hype is the Oracle of Omaha, Warren Buffett. We previously mentioned how Buffett delivered a confidence blow to the markets by selling off his stakes in the major U.S. airlines. Well, now it seems he’s given up a controlling interest in Goldman Sachs and has also sold off shares of JP Morgan and many other companies.

Warren is really my signal provider in this madness, and I’ve stated before that I will be ready to buy stocks as soon as he does, but it seems he’s doing exactly the opposite at present time.

It’s now been a week since the bitcoin halvening, and it seems we’re finally starting to see some of the effects. Of course, we’ll need to wait at least until the difficulty adjustment tomorrow before getting a good picture of what’s going on, but already, we can see that the hashrate is coming down.

Transaction fees, however, are trending up, and the average cost to send BTC is now $3.75.

It seems that the reduced hashrate is resulting in longer blocks and is creating a bit of a backlog on the network. We can see the total number of transactions waiting to be confirmed (mempool) have been building up lately.

As a result, the time that it takes to mine each block is now approximately 14 minutes, rather than the usual 10. So if anybody wants their transactions to go through quicker, they’ll need to raise the mining fee. Of course, if you don’t mind waiting in traffic, you probably won’t need to pay that much. As well, tomorrow’s difficulty adjustment should help to clear the log and return the fees to normal.

Still, and let me be clear here, because there’s a slew of trolls currently tagging me on Twitter who think that a fee of $3.75 is valid reason to jump ship or switch to another standard for digital money, it’s something that most people transferring bitcoin aren’t even going to think twice about. There are at least three dozen cryptos that are cheaper and faster, but none of them have the security, digital scarcity, immutability or liquidity that BTC does.

Bitcoin isn’t very good with micropayents, and the moment I find myself in a Starbucks trying to buy some coffee with crypto, that’s certainly something that I will consider, but as the value proposition of bitcoin is about having an asset that is disconnected from governments and banks and not about making it easier to buy coffee, I really don’t see any reason to ditch the gold standard at this time.