In some circles, today is considered a great holiday. For some, it’s even higher than Easter, Passover, and Ramadan. Now, I hope you guys don’t blast me for blasphemy, but I am talking about the stoner holiday of April 20th, which is especially auspicious in the year 2020.

Nobody really knows why the number 420 is so synonymous with pot smoking, but back in my teen years I attended a Metallica concert and distinctly remember that at 4:20 PM, the entire place was quite lit. These days though, with the kids in the house, I can only think about the HMMJ pot stocks index, which has fallen 83% from its peak in late 2018.

Meanwhile, it’s looking almost like crude oil is grabbing all the headlines today as it experiences its own mind-blowing crash. Down 57% today, its price has already halved today and now trading single digits below $8 a barrel. Let’s see if it doesn’t reach $4.20 by the end of the day.

UPDATE: By the time I finished writing this letter to you, the low of crude oil was almost exactly $4.20 per barrel. Funny how that worked out.

So, these types of anomalies can happen in the markets, but we need to understand how crude oil is traded. It’s actually only one contract that’s collapsed this much, the May contract that expires tomorrow. The June contracts are still trading just below $20 a barrel, now at $18.27 as of this writing.

It seems like the breakdown is confined to the front end of the curve, meaning that those who are willing to hold on to it for a few months are expecting the price to rise in the long term. The contract that expires in January is now trading at $34.27. 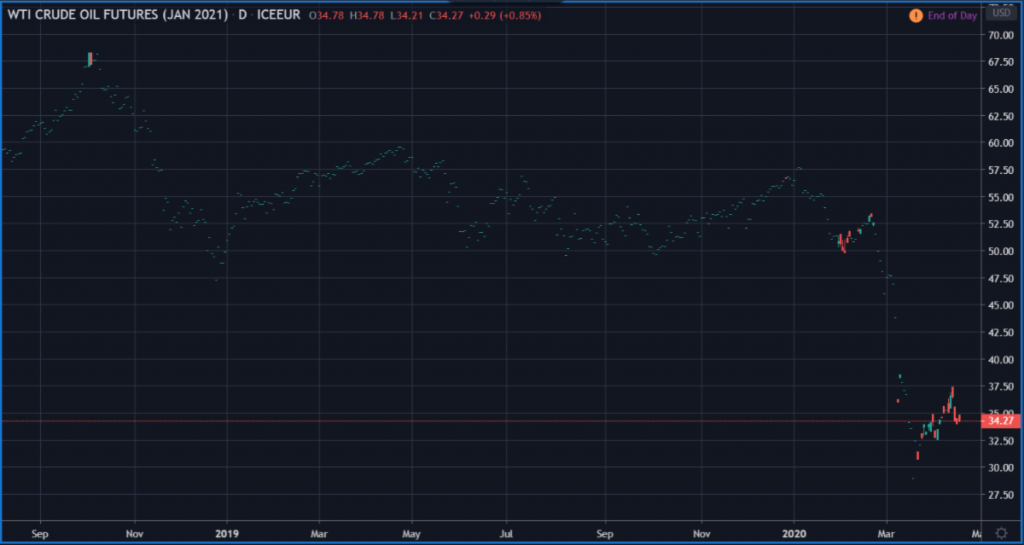 So, as nice as it might seem to buy oil at $4 per barrel and hold on to it for a while, what will actually end up happening is that the contract will need to be rolled over, something usually done automatically by the broker, and then the barrel you bought at $4 will then be worth $18.27, without any profit for the trader.

Many brokers have already rolled over to the next contract, so the price you’ll see there will probably look a bit more normal. As well, an increasing number of brokers are using a new form of contract that aggregates all the future months in order to be traded seamlessly with no rollovers, so their the price will be slightly higher as well.

Also, I’d be pretty careful about being on the buy side at the moment. There’s talk that the price could go negative at some point as the cost to hold the stuff rises.

By now, the current oil contract has actually dipped below $1 per barrel. It’s been quite amazing writing today and watching the price drop. People who write in the crypto market are already quite used to this phenomenon where you write something about the price, but then the volatility renders your theories useless by the time it reaches the public.

The price of bitcoin today remains barely changed and is now holding just fine at $7,000 per coin. Mati Greenspan Click to tweet

I’ve had a bit of fun on Twitter today trying to calculate the oil/btc ratio, but now that oil is trading for one cent, it seems kind of pointless.

For all those who’ve challenged bitcoin’s use as a store of value or the narrative that bitcoin hasn’t held its value all that well during the crisis, I beg to differ.