We’re all familiar with the famous shoeshine indicator. Basically, when your barber or cab driver starts giving you tips on what assets to put in your portfolio, it’s a sign that the market has overheated and the bubble might soon pop. Mati Greenspan Click to tweet

It certainly worked during the crypto bull run of 2017. Just about anybody who remembers the market at that time will have a story about a neighbor or a waiter who started talking crypto out of nowhere.

By the time we got to Dec. 18 of that same year, the echo chamber had reached maximum capacity, the last retail dollar had found its way into the market and the tide suddenly turned.

So it’s no surprise that during this cycle, crypto insiders have been raising alarm bells whenever they happen across someone talking to them about bitcoin or crypto in their daily lives.

However, as we figured out recently, the shoeshine indicator actually isn’t relevant at all in this current cycle!

The logic is simple. The same cab driver, who played the role of the retail bag holder during the last pump, didn’t forget everything and turn into a new cab driver.

He’s the same guy who learned about bitcoin, now knows about it, and has probably been hodling since. So the fact that price is up and he’s happy about it is good news.

Hundreds of millions of people have been initiated into the broader network we call Bitcoin. Some may have turned into short-term speculators, but the data shows that most of them are probably not ready to take their cash out of the market.

The orange line in this graph shows the percentage of the market that has been hodling for more than one year.

Sure, there’s been some movement of coins and profit taking up near $40,000, but we’re nowhere near the level of old coin movement that occurred in the second half of 2017. 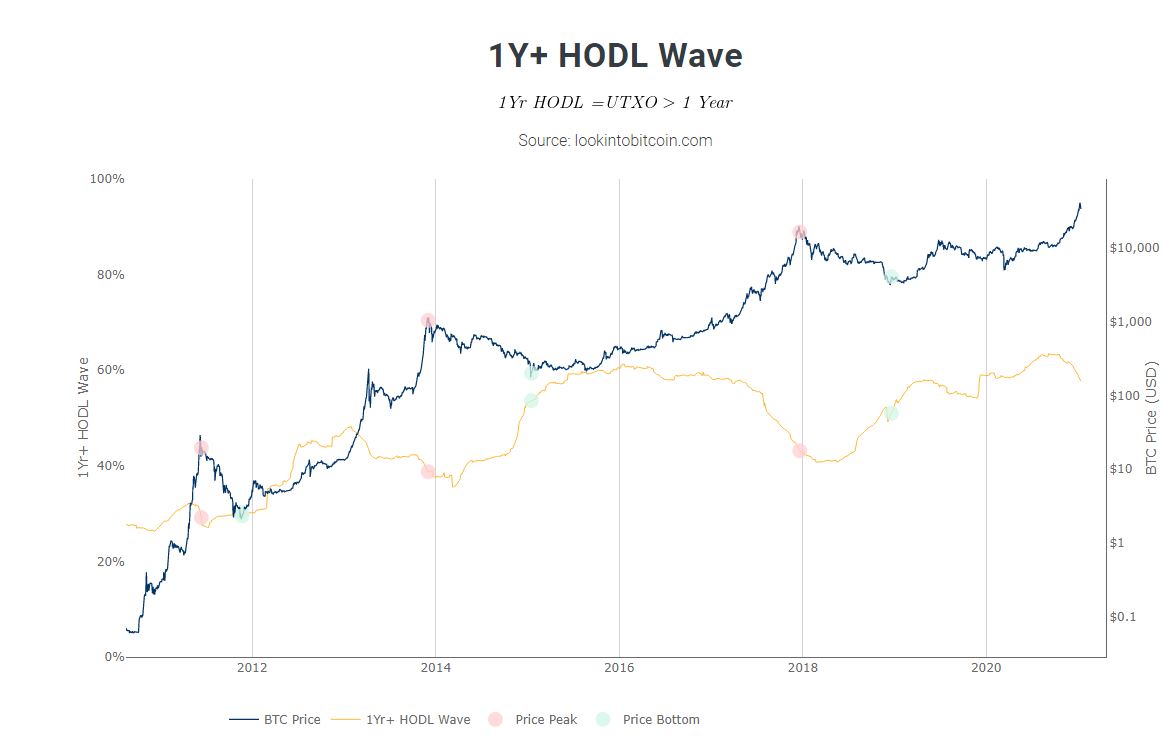 What indicator should we look for then?

Well, working on the assumption that the new money coming in is institutional, a theory that several very large financial and crypto firms have already officially corroborated, the question is at what point will the last suit put in their last dollar?

Well, the answer to that would of course require us to first determine just how many more dollars are available in the market for allocation, and how many more will soon be created and need to find a home.

Certainly our new friends are starting with small allocations, mere fractions of a percent of their respective portfolio sizes.

Yet, should they keep experiencing the kinds of outstanding returns that they’ve been seeing these last few weeks, there’s no doubt that in this lopsided economy of unbalanced risk due to artificial market manipulation by the Federal Reserve, these fractions will gradually yet very steadily increase over time.

How do you measure more of more?

A perfect example of how adrift we are right now in uncharted waters can be found by watching the famous Crypto Fear & Greed Index, which has been riding at its highest levels of 85+ for the last few weeks and has now plunged down to 78 today, a reading which still indicates “extreme greed.” 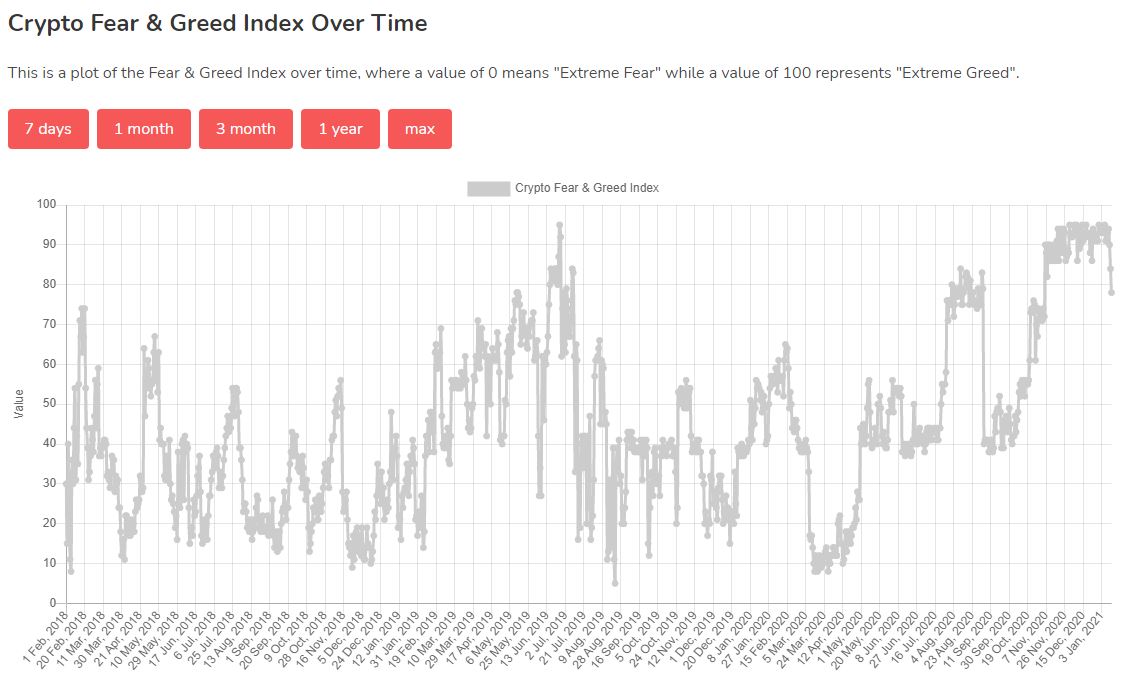 Hats off to writer and podcast host Mark Hunter for pointing out more than a month ago that this would likely happen.

The fact is that this indicator was set up just at the beginning of crypto winter, and it’s worked pretty well since then, but just as Bitcoin’s RSI indicators read overbought for months at a time in previous bull runs, it is likely that as long as we’re in a bull market, the above should remain firmly green, which I guess is the point of a good indicator.

So, as we’ve been alluding to for a while, the perception of where this market is headed is crucial.

Many people seem to have rather preconceived notions about how things work, that assets travel upwards or downwards in value given any number of factors that are constantly changing.

While this is largely true, it vastly discounts the notion that the only way we can measure the value of an asset is based on another asset.

For example, the fact that bitcoin has gone from $10,000 to $35,000 is merely a reflection of the increase in the value per bitcoin.

The bitcoin in your digital wallet hasn’t changed, it’s stayed the exact same amount. The blockchain hasn’t changed either, it keeps doing what it’s doing no matter how people perceive its worth.

Some part of that perception might be based on the confidence and value of the U.S. dollar, against which bitcoin is constantly measured, and some part based on pure speculation of how the entire industry may evolve in the future.

But when it comes down to the bare bones of it, the only things that really influence price are buyers and sellers, as well as the direction that money is traveling.

Money could have many meanings though. If we come at it from the perspective that bitcoin in and of itself is money, the foundation of an entirely new ecosystem that is currently being built on, then we understand that the question is not the right one.

We shouldn’t be asking at what point the dollar value tops out, but how long until bitcoin’s maximum potential is reached?

How long until the entire legacy financial system migrates over to a digital internet on the web 3.0 based on distributed ledger technology?

My feeling is that we’re still early. What do you think?

As always, many thanks for reading and engaging. On this topic, we wanted to highlight an interview with Charles Bovaird, QE’s VP of content and editor of all the company’s research and analysis, including the organization’s daily newsletter.

The topic of course is crypto in the mainstream media, and I think Bovaird, as a senior contributor at Forbes, does an excellent job defending his profession and dispelling a lot of preconceived notions about how the press functions that to us just seem rather preposterous.

Watch here now. This is a good one!!