Kodak, the maker of outdated photography equipment, is somehow up 1,500% in the last 48 hours.

Mind you, this is the company who in January 2018 announced that they were going to do an initial coin offering (ICO), and missed the peak of the blockchain hype cycle by just a few short weeks.

As we can see, the bump from their blockchain gambit took nearly a year to dissipate. Today’s moves could take a bit longer. 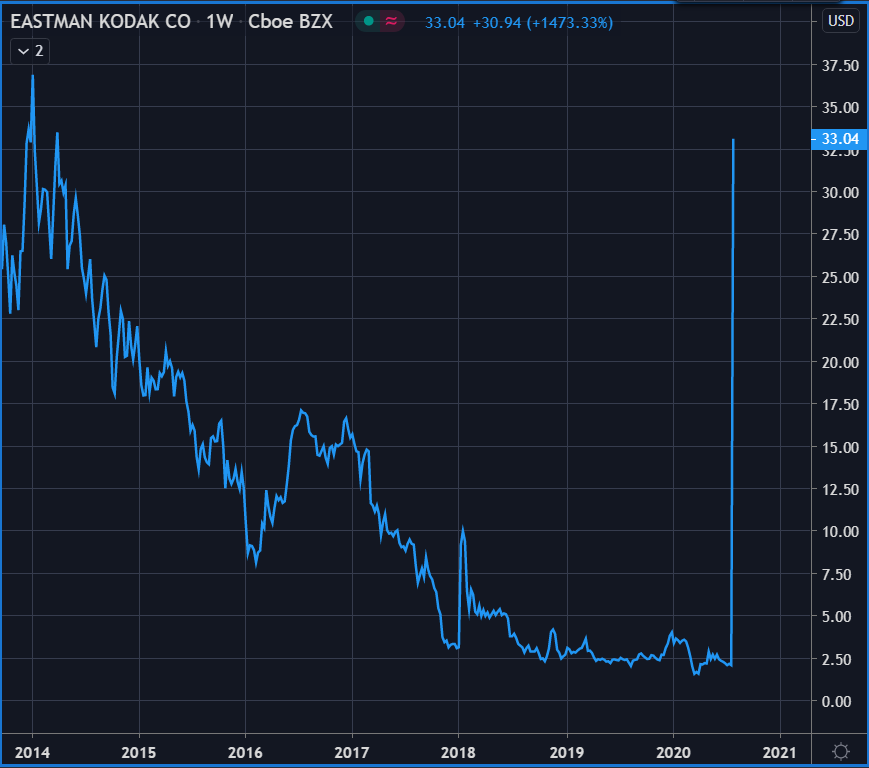 Unlike Hertz, Nikola, and Tesla, Kodak has a strong headline that it’s gravitating toward, or at least one that is somewhat strong.

So basically, the company’s market value has risen more than $1.6 billion over a loan the company received for less than half that amount. Interesting.

Once again, the Federal Reserve is on the stage, but this latest Fed press conference has a much different tone than all of the other ones we’ve seen since the start of this pandemic.

We’ve basically gone from shock and awe to Operation Yawn Factory. See, the Fed has already done all it can to stimulate the markets. It has expanded the balance sheet to its maximum limits, like a balloon holding way too much air, so it’s not adding any more today.

At this point, it’s up to Congress and the president to provide fiscal stimulus. Unlike the Fed, which serves the markets, the government has the power to print money right into peoples pockets.

So, since the money printer is taking a rest, the Fed is doing its best to speak softly (literally) so as not to wake up the markets. Basically, the more boring, the better.

Hopefully, things will continue to improve (in other areas) during these most interesting times.