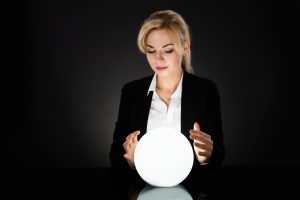 “Where is bitcoin headed?” is the question everyone asked me most often over the holidays, followed by, “Sir, would you please stop dancing on the table?”

I would be wary of anyone who tells you they know what the price of bitcoin will be at the end of the day, much less the end of the year. But I do see unmistakable trends that you can use to be a better investor in 2018.

When we analyze new investment opportunities at Bitcoin Market Journal, we generally like blockchain platforms more than blockchain applications. Think of platforms like the railroad tracks that other trains (or applications) will run upon. Or like the operating system that runs your apps.

That said, only so many platforms can reasonably exist (there are only a handful of operating systems), and new platforms have to provide new value. That’s why there’s a huge first-mover advantage to early platforms, provided they can maintain their lead. Platforms like Ethereum, Ripple, and Blockstack are huge investment opportunities.

2) New Finance will go mainstream. I went to a church service on Christmas Eve where I overheard a father actively discussing with his college-aged daughter whether or not he should invest in bitcoin. This is a sign of the times.

In the early days of the Web, things were really hard to use. To visit websites, you had to use clunky browsers that were difficult to understand, and failed a lot. To get email, you had to go through your AOL account. Gradually, the technology improved, until it was everywhere.

In the world of New Finance, we’re in the early days of the Web. (Think pre-Netscape.) It’s still difficult to buy bitcoin, much less participate in an Initial Coin Offering. It’s only for the geeks. But that will change, and much more quickly than the Internet: think two years instead of five. This is the year when everyone starts to get on board.

3) Tokens will eat the economy. The real innovation is tokens: digital stores of value that can be bought, sold, and traded. Entrepreneurs are using them for fundraising through ICOs, but tokens will grow to encompass every aspect of Old Finance.

For example, tokenizing real estate holdings. Imagine living in South Africa, and owning a fraction of a building in New York. The value of your token rises and falls depending on the value of the underlying property.

Or tokenizing venture capital firms. Imagine being able to invest in early-stage companies by owning a fraction of a top-tier VC firm. The value of that token reflects the performance of the firm’s VC investments.

Or tokenizing fine art. What if you could own a small piece of an original Van Gogh or Warhol painting? Any rare asset can be tokenized: collectible baseball cards, the royalty stream from popular songs, George Washington’s dentures, and on and on.

Hang on, because 2018 is going to be a wild ride. We’re living in one of the most exciting times in history. And that’s why I will never stop dancing on the table.