Of all the news we’ve seen lately, nothing will have as large an impact over the long-term as this. …

That’s right, scientists have recently discovered the possible presence of very large large swathes of ice on the dark side of the moon, as well as small particles of water in the area that the light touches.

Even though a trip to the kitchen may seem like a big deal at times, we often take for granted that our planet is made of two-thirds water. Getting it off the planet, however, is not so simple. Water is heavy, especially in the levels of gravity that we’re used to.

The prospect of large amounts of water on the moon basically accelerates the exploration of deep space in ways we can hardly imagine.

Not only could it provide easy sustenance to human travelers/settlers, it could also be easily broken into its basic components of oxygen for breathing and hydrogen for fuel.

A human colony on the moon, which seemed like a crazy Muskinite dream a month ago, could soon become reality.

So basically, after destroying our own planet and bringing it to the brink of no return, we’re now gearing up to start extracting resources from other planets as well.

Just imagine the amount of value we can easily obtain. You hear that, universe? We’re coming for you!!

At about the same time as the above discoveries were released, in a matter that was probably completely unrelated, the largest-ever blockchain transaction was recorded as a user shifted exactly 88,857.24491179 BTC, worth roughly $1.15 billion.

While it was the largest transaction ever in USD terms, it would probably be the seventh-largest or eighth-largest in BTC terms.

The total fee paid for the transaction was $3.58.

Despite what the proponents of alternative crypto projects or bitcoin competitors may say about the cost being high, this has to be some kind of world record for the greatest wealth transfer at the lowest cost.

Three bucks doesn’t seem like a lot for most of us, but in some countries, it’s a day’s wages.

In the beginning, it was generally thought that the longer we go, the more we would see dispersion, but recent data suggests that there’s more consolidation in bitcoin now then ever before, as the number of Bitcoin addresses holding over 1,000 BTC hit a new high this week. 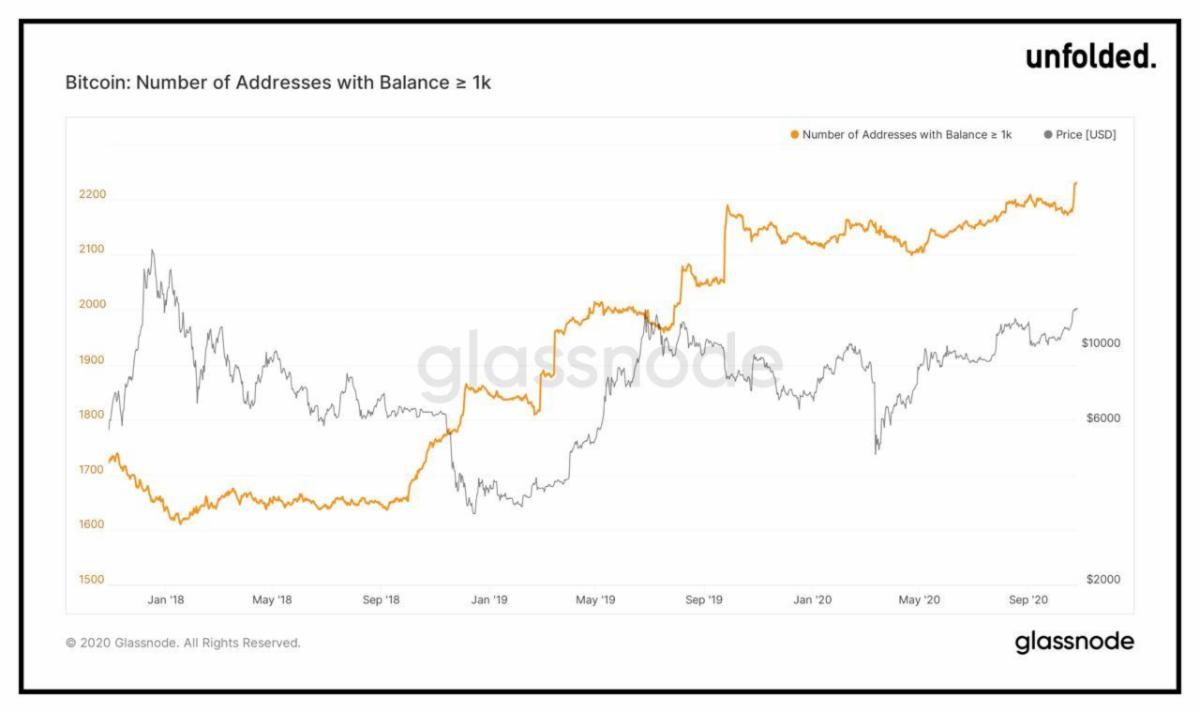 So as the stock market continues to feel the heat of the elections and the VIX volatility index surges past 30 points, the crypto market is in the midst of a red-hot rally, led of course by bitcoin and ether, both of which are up about 4% today.

What’s even more significant on the charts though, at least as far as bitcoin is concerned, is that the digital currency reached $13,640, its highest level in more than a year and mere millimeters away from its loftiest point since January 2018.

Note that between the levels of $14,000 and $20,000, there is insufficient price data to single out any specific points of resistance. Cue the music! 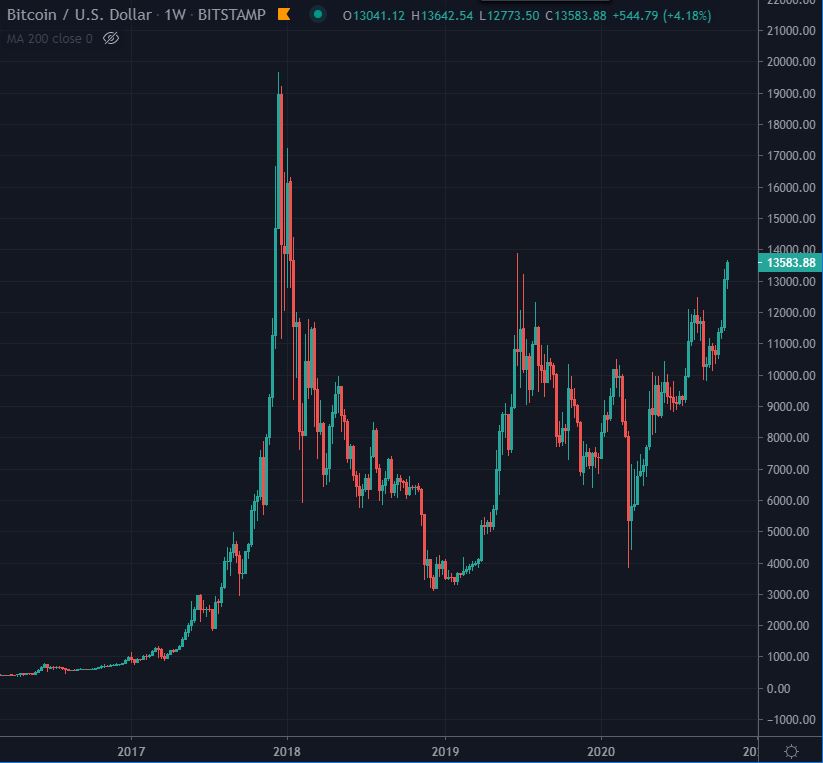 Yes, there’s still a possibility of a large retracement. $14,000 is a large point of resistance, and we’re still watching that upward channel. Mati Greenspan Click to tweet

However, this sort of bullish action at a time when stocks are showing increased volatility only adds to the narrative that bitcoin can be seen as a safe haven to hedge increasingly larger portfolios.

Needless to say, my strategy of playing it safe yesterday proved an unnecessary precaution, and my high-risk crypto-only account is now back at 100% allocation, mostly in BTC.

It is a bit annoying to pay a bit of extra fees and miss out on part of the gains, but that’s the way it goes sometimes.