With a presidential election coming up roughly two weeks from today, a global pandemic, the economy in the dumps and a rapidly accelerating divide between the rich and the poor, I’m not sure that the future of cross-border payments was exactly at the top of his priority list, but nonetheless it is part of the job description.

As the head of the U.S. Federal Reserve, the largest financial institution in the world and overseer of most money on the planet, it is Powell’s job to ensure not only the stability of the U.S. economy, but of the entire world.

In this context, it’s not at all difficult to understand his comments today that the U.S. doesn’t need to be the first to implement a digital version of the dollar, and that it’s more important to do it correctly.

Of the challenges listed by Powell, I was very pleased to hear him mentioning data privacy as a top-of-mind concern, one that may not have been shared by his colleagues on the panel.

You see, when we think about CBDCs in the most basic form, what we’re really talking about is a technical upgrade to the economy’s key infrastructure, something that will pave the way for the next wave of financial innovation.

Each country, of course, will have vastly different requirements and design preferences.

For what it’s worth, the IMF seems to be most interested in getting everyone to work together on this, which is probably why the panel participants were diversified across the four corners of the Earth.

However, I’m a bit surprised at the lack of a representative from China, who is way ahead of the rest of the world and has already transacted more than ¥1 billion worth of their new digital currency. Clearly, China does not share the same values as the Fed. Instead, it wants efficiency over privacy.

Europe, on the other hand, seems to be stuck in a time-looped paradox between the power to upgrade their day-to-day regulatory and compliance oversight and the unanswered issue of financial privacy for their citizens, both of which are highly valued there.

That’s not too much of a concern though for Augustin Carstens, general manager of the Bank for International Settlements and long-time bitcoin antagonist (for obvious reasons), who was also on today’s panel.

In fact, one of Carstens’ main selling points for digital currencies was that “Central Banks will have absolute control on the terms and regulations of the currency and will also have the technology to enforce that.”

It looks like all this talk about digital currencies has had a noticeable impact on the price of bitcoin and the other cryptocurrencies. Mati Greenspan Click to tweet

The movement was small, but very distinct, especially as we’ve been in this tight consolidation for what feels like forever, and bitcoin’s volatility is nearing all-time lows.

When clients and journalists start reaching out regarding a movement of 3%, you just know that bitcoin is just much more stable than it once was.

In any case, the move has now brought us up against the final hurdle. As far as the chart is concerned, bitcoin has been ranging between $10,000 and $12,000 per unit since late June and today’s gains (last green candle on the right) bring us right to the top of this range. 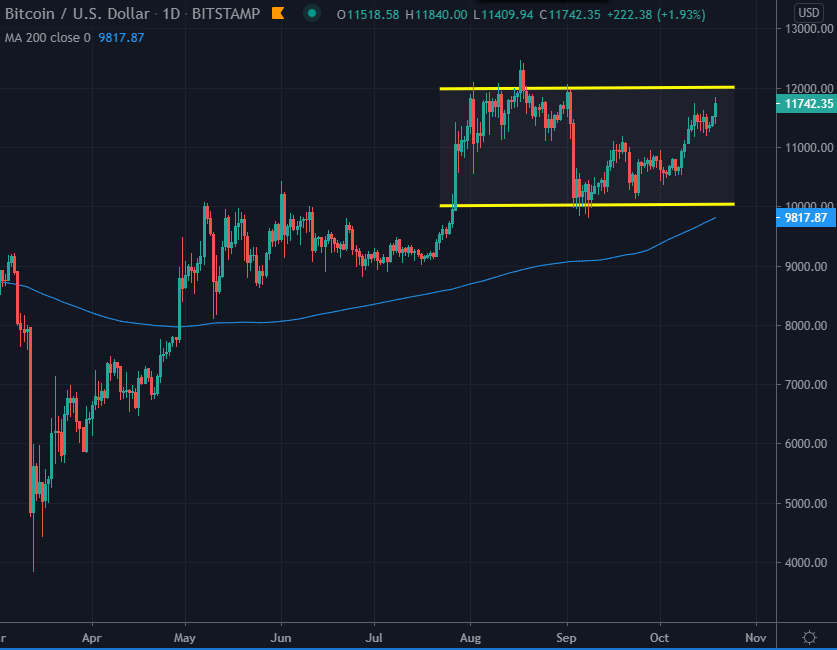