It’s enough to boggle the brain of even the most economic thinkers, I don’t see how the general public is expected to keep up. After all the stimulus, both monetary and fiscal, that’s been pumped into the market, inflation is still flat.

Earlier today, the United States reported their Consumer Price Index (CPI), which is arguably the best measure of inflation we have. The results. …

(There’s no headline to show.)

Yeah, that’s right. The announcement was so boring that the media hasn’t even covered it.

Analysts were expecting something like a 0.2% increase on last month, but instead they got a big zero.

Germany also announced their CPI figures earlier today. There was, well, nothing to write home about. Over in China, astonishingly we do have a headline to show.

Even before COVID-19, this was considered to be the biggest economic puzzle of our generation. After the stimulus however, it may be about time to admit we have a real problem. Bloomberg anchor Joe Weisenthal put it quite right. … 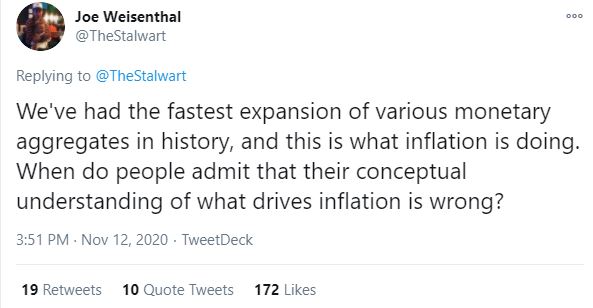 But also, why would we want inflation in the first place???

I mean, why is the devaluation of currency even a goal that policy makers strive for?

This should be the real question, and it is certainly one worth exploring.

Inflation however, does not seem to be top of mind for the world’s top central bankers today. To the dismay of many crypto enthusiasts, central bank digital currencies are not either.

As I write, we’re watching a unique joint panel with the bosses of the Federal Reserve, the European Central Bank (ECB) and the Bank of England.

Their focus, and understandably so, is squarely on the virus. Funny enough, there doesn’t seem to be much they can really do about it.

In 2008, the lack of liquidity among banks was a key issue, one that central banks are extremely good at handling by now.

With COVID-19 however, the problems are not economic in nature. Joblessness is actually mandated by the governments who are not allowing people to work for fear of spreading the virus. This can’t really be fixed by cash injections from the central banks.

Nevertheless, inject they shall. The ECB is already pretty much committed to adding stimulus next month.

Last week, under cover of the U.S. elections, the BOE announced another round of stimulus.

The Fed, for the time being, is clearly hesitant to do anything until the election is finally resolved but it seems pretty clear that once things are settled, they’ll bring on the money printing as well.

As many of you know, I’ve been putting out some guesses on Twitter lately as to what the price of bitcoin might be by the end of the day.

I do hope that everyone understands that these are not projections or predictions, just guesses, but they have been getting more accurate lately as the price keeps climbing.

Perhaps we can call it a homage to the perception that most people seem to have about what financial analysis is supposed to look like.

Managing money is not about being able to tell the future.

Making money in the market is about building a diverse portfolio of assets that are likely to appreciate over a longer period of time. Mati Greenspan Click to tweet

This is of course something we aim to do once our financial products come online, hopefully early in the new year.

If we’re only trading crypto though, the tools to diversify are severely limited, a fact that’s played out in our favor so far simply because bitcoin is outperforming just about everything else on the planet right now, even gold.

Fortunately, there are several alternative investments that are worth watching.

Hopefully, continued innovation will provide investors with an ever-growing selection of options they can leverage.