“If you don’t have anything nice to say, don’t say nothin at all.”

That’s pretty much how I felt about the first presidential debate, which is why it hasn’t been covered in the BMJ Newsletter.

The vice presidential debate last night was notably better. At least the candidates discussed the issues rather than hurling personal attacks, but that is a pretty low bar to set for those who are supposed to be running the world, especially in the time of a crisis.

As far as the markets are concerned, neither of the two previous debates nor the one scheduled for next Thursday should have any impact on asset prices.

Unlike most elections, there are very few undecided voters right now, and the candidates know that the measure of winning is the number of people they inspire to actually vote.

At this point, I’m not even sure the outcome of the election, whenever it may be, will have that great an impact for Mr. Market, as long as the result is decisive.

I will note that the last answer from Vice President Mike Pence was certainly cause for alarm. When asked if he would accept the outcome of the election and what role he’d be likely to play should President Donald Trump refuse to cede power, his answer was clear as a bell. “We’re gonna win.”

At this point, a dispute seems almost unavoidable, not because anybody might refuse to face reality but because reality is subjective.

Due to the threat of COVID-19, an overwhelming number of people will be voting by mail this year, almost all of which will be votes for the left. The bottleneck that’s likely to be caused at the post will mean that many will not be counted by November 4, which is when the election results are traditionally decided.

Stop me if I’m just stating the obvious here, but the argument on that day seems simply inevitable. Republicans will say “look, we won” while Democrats will say “but all the votes haven’t been counted yet.”

No doubt it’s for this reason that Mark Zuckerberg has made the following statement….

Incidentally, this is also one of the main reasons that Trump is so eagerly trying to get his Supreme Court nomination rushed through. Such a dispute can only be resolved by the highest court in the land.

Bringing it back to prices, it almost seems like the market doesn’t really care who wins at all. All investors care about is stimulus, which both parties seem willing to provide amply after the election.

Maybe a bit more from the left, but that’s non-consequential. What really matters here is not who wins the White House, but who wins Congress. Or, more importantly, whether the same party that takes the White House also takes both houses of Congress.

This was the case that caused markets to rocket in 2016 when the Republicans won all three houses and had two full years to pass through everything that they’d been itching for during eight full years of President Barack Obama.

Today we saw a beautiful pop in the crypto markets, one that was not reciprocated in traditional assets. No doubt this was caused by the following announcement. … Mati Greenspan Click to tweet 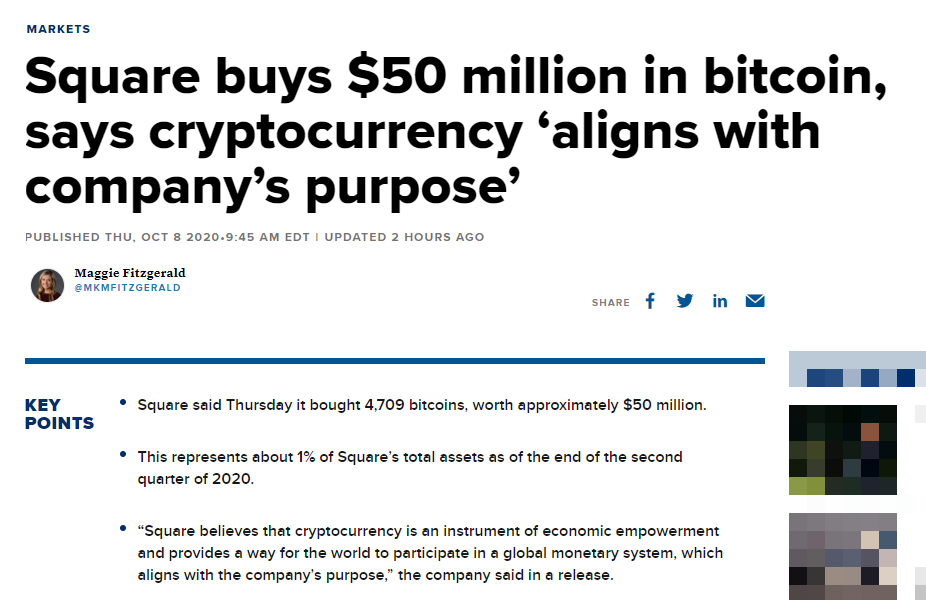 It’s a bit surreal to see gigantic corporate entities now going knee-deep in bitcoin. Not that we couldn’t have seen this coming.

More than one analyst has predicted that companies would continue to adopt the world’s most prominent digital currency.

Still, nothing ever happens all at once, and the movement in the price on the back of this announcement is barely noticeable on the long-term charts, where we continue to track an ever-tightening consolidation wedge. 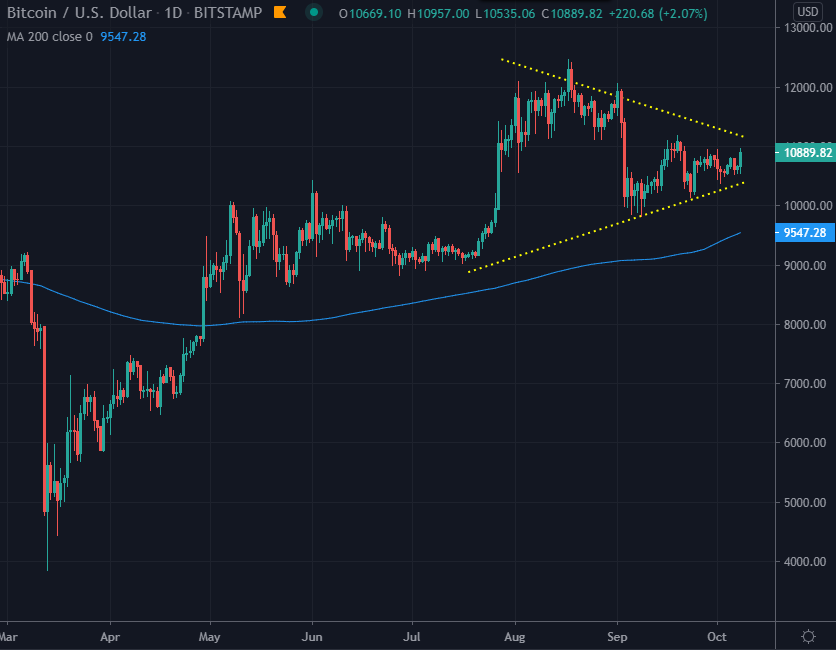 Keep in mind that the nature of this particular wedge will make it difficult to tell once we break out, especially to the upside.

Whereas the bottom yellow line is clearly defined, every analyst will draw the upper line with a slightly different angle.

Therefore we can only really rely on the psychological barriers of $11,000 and $12,000, respectively.