A glitch. That’s what they’re saying brought down the world’s third-largest market for an entire trading day this morning in Japan. However, the exact root of the problem has yet to be determined, and they’re hoping that trading will resume Friday morning.

The Tokyo Stock Exchange generally puts out more than $10 billion worth of turnover on a daily basis, so you can bet there’re a lot of smart people working it out now.

This would usually be a great place to say some shtick like “bitcoin never has glitches,” but first of all we’ve seen plenty of cryptonetic glitches lately, especially in the world of DeFi and secondly, today might not be the best day to highlight bitcoin’s resistance to negative news.

Let’s be clear here. BitMEX is an illegal casino whose executives are frequently caught bragging about ripping off their customers.

No doubt, the authorities have been on them for a long time, just looking for something that’ll stick, almost like how they got Al Capone on tax evasion.

It’s not his only crime, but it’s the only one the cops were able to prove in the court of law and put the monster away.

It’s interesting though to think about how this event might influence such a small market. Unlike the infamous hack on the Japanese Mt. Gox in 2013 that crashed the price of bitcoin for several years, BitMEX has very little dominance over the market.

We see prices have dipped in the first few hours of pandemonium, but today’s red candlestick (last candle to the right) seems rather small on the long-term charts.

Now, we find ourselves exactly in the middle of the range (yellow lines) we highlighted a few days ago and resting almost exactly on the average price of the last 100 days (red line = 100DMA). 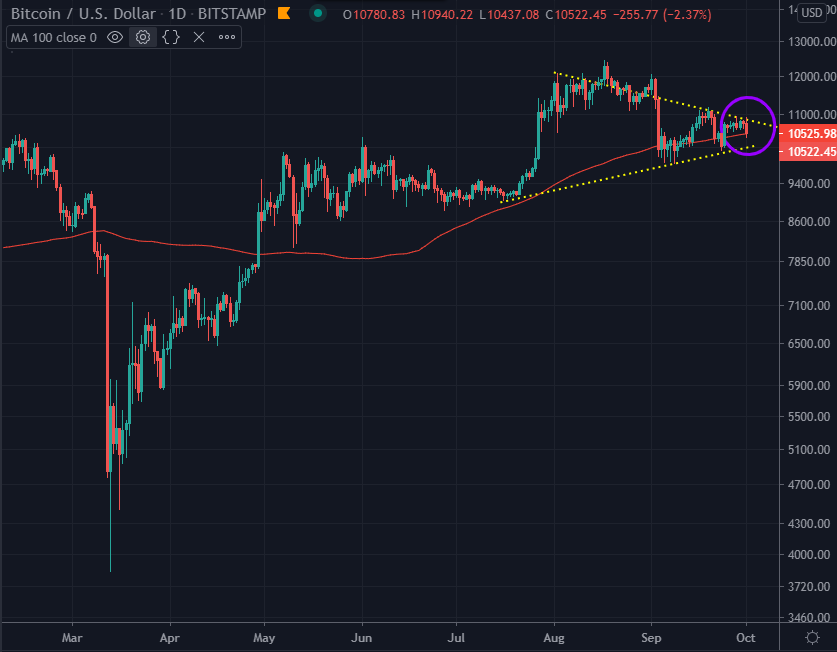 So no, the short-term price action isn’t spectacular. What’s interesting is the dynamic going forward.

We’ll only really see tomorrow or the next day whether there was any spike in transactions on the Bitcoin blockchain, but from what I see volume on exchanges is actually going down.

Now, nobody knows the future, but what might very well be happening at present is that traders are simply taking their coins off the main exchanges, utilizing one of Bitcoin’s key perks, self-custody.

This feature comes in especially handy when there is any fear surrounding the integrity of centralized market makers, as is the case today. After all, BitMEX is probably not the only unregulated exchange out there with similar AML (anti money laundering) standards, or lack thereof.

So, if this is indeed the case, the reduced trading activity and reserves of the largest market participants over the next few days could actually serve to reduce the overall liquidity that’s available in the market.

There will only ever be 21 million units of bitcoin in the world, and we’ve seen many times how bitcoin tends to react when there’s too few available, especially when you have a slew of happy traders on social media screaming “buy the dip.”