During the 2016 NFL preseason, Colin Kaepernick of the San Francisco 49ers American football team refused to stand during the National Anthem. It is difficult to explain to non-American readers why this is a big deal.

It is a tradition to play The Star-Spangled Banner before sports games, standing at attention with your hand over your heart. Kapernick said that his refusal to stand was a protest against police brutality and the American criminal justice system, which targets people of color.

Since then, the movement of “taking a knee” during American sports games has picked up steam, with professional baseball, soccer, and hockey players also refusing to stand.

Politics aside, the National Anthem is a song about war. Americans should absolutely not have to pledge their allegiance to the glories of war. For that reason, The Star-Spangled Banner is a terrible national anthem. (It’s also difficult to sing.) We should replace it with America the Beautiful, which is a celebration of the country, and has a catchier melody.

I have another explanation for the wave of people sitting during the National Anthem, which is the growing realization that the notion of “America First” is outdated.

American children are trained from a very early age to identify as Americans first. Public schools still require students to put their hand over their heart and recite the Pledge of Allegiance every morning before school. That deep mental habit ensures that the concept of “Americanism” is indelibly imprinted upon every young heart.

Where else do we ask people to put their hand over their heart? Do we ask for it in marriage? Or in parenting? Or in pledging to help humanity?

Americans are trained to pledge their loyalty to the flag. Yet we now find ourselves in a global economy, with a global workforce, facing global problems and opportunities. America can no longer be first by thinking “America First.” It just doesn’t work that way.

I grew up in Ohio, where many of the factory jobs have now moved overseas. We’re not going to bring those jobs back, because they’ll do it more cheaply in China, and we demand cheap goods when we shop at Walmart. The only way to bring the jobs back is innovation and education.

To quote Gilfoyle from HBO’s Silicon Valley, “Your borders are merely a construct. I prefer to think of myself as a citizen of the world.”

Think of yourself as an Earthling first, and an American second. 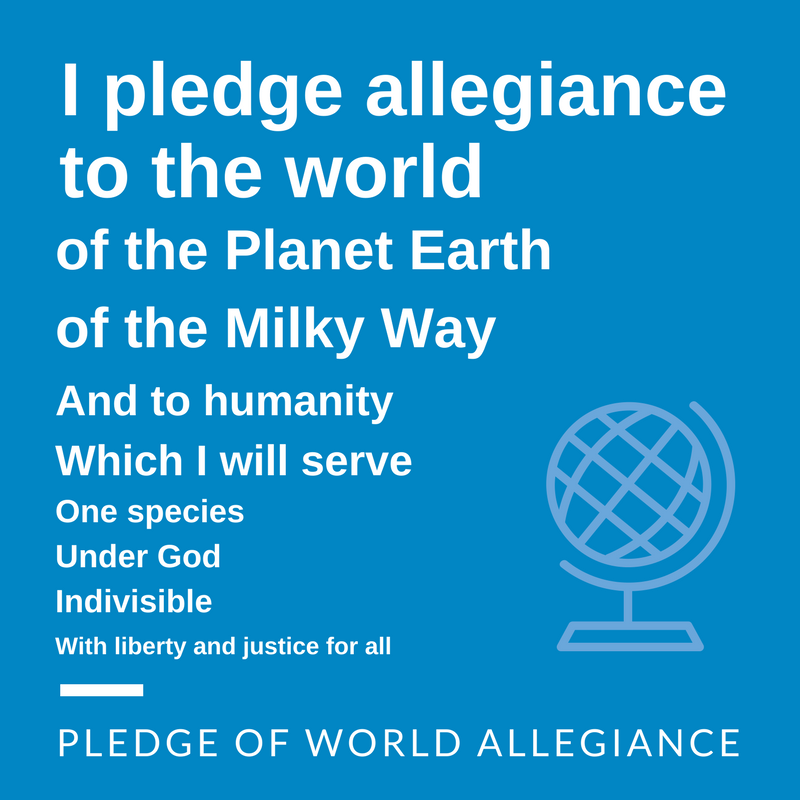 Bitcoin is Global, Not Local

One of the biggest mental blocks that American investors bring to bitcoin is their deep America-first programming. To invest well in the world of New Finance, you’ve got to lose that thinking.

Bitcoin, altcoins, and cryptocurrencies are not tied to any country. They’re global. They’re being traded around the world, 24 hours a day. Governments can regulate them, but governments cannot get rid of them, any more than governments can shut down the Internet.

Even global investors are used to thinking locally: American stocks are traded on American exchanges, Chinese stocks on Chinese exchanges, and so on. These cryptoassets blow apart your antiquated notions of nations.

Why is bitcoin (or any other altcoin) so volatile on any given day? It could be due to Brexit, or military tensions in Korea, or the Venezuelan economic crisis. It’s a global phenomenon. This is what’s so exciting about the tidal wave of change that the blockchain is bringing to the economy: it’s forcing us all to think globally.

The people I meet at our Blockchain Investor Meetups are incredibly diverse: not just in occupations and backgrounds, but in their countries of origin. Russians, Indians, Koreans, Canadians, Brits: they’re all represented. Bitcoin is the great melting pot.

You Can Still be Patriotic

Fortunately, it’s not either/or. You can be both an American AND a global citizen.

As an example, I’m a proud Bostonian. I love the amazing innovation, education, and blockchain talent that we have in our city. But I don’t hate Idaho. I can identify both as a Bostonian, and an American.

I celebrate the American ideals of innovation, opportunity, and liberty. I’m proud of our achievements and contributions. But I recognize that lots of other countries have strengths we don’t. (Switzerland is a true democracy.)

The altcoins that will win are the ones that will provide the most value for the greatest number of people. The more you expand your worldview, the better an investor you will be.