The old English tale of Robinhood has always been an inspiring one. It might not apply to all times and places, but given the landscape of the global economy we certainly could use a hero.

Dave Portnoy is a regular enough guy, honest and straightforward, as well as outspoken. He is also the founder of a successful startup that has been forced to cease operations due to COVID-19.

He’s got over a million followers on Twitter, so he decides, like so many furloughed young men of his time, to turn to day trading using the Robinhood app, which has become popular in recent years due to its no-fee stock trading.

As we’ve mentioned in these regular updates, the most recent stock rally has largely been led by retail investors like Portnoy and his followers, and they haven’t been doing too bad either.

Even though logic might dictate that buying up bankrupt companies is a bad idea, many have managed to turn a profit doing it. In this 48-second video, Dave is seen explaining his simple strategy and encouraging people to buy anything and everything without discrimination.

As we can see in this graph, found in this morning’s Points of Return Newsletter, at least in the short term, these day-trading merry men are putting seasoned stock pickers to shame. 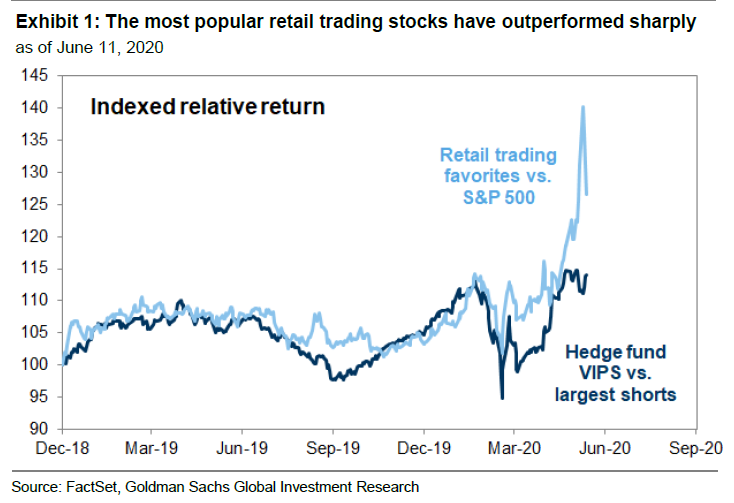 The thing is Portnoy’s been getting awfully cocky lately. I’ve seen it way too many times as an account manager at eToro, and at other brokers before that.

Newbies come in, make a quick few bucks, and suddenly they’re king of the world. In his mind, Portnoy is much smarter than all the people in the financial industry put together. He even attacked the Oracle himself, calling him “washed up” in dozens of tweets like this one every day. 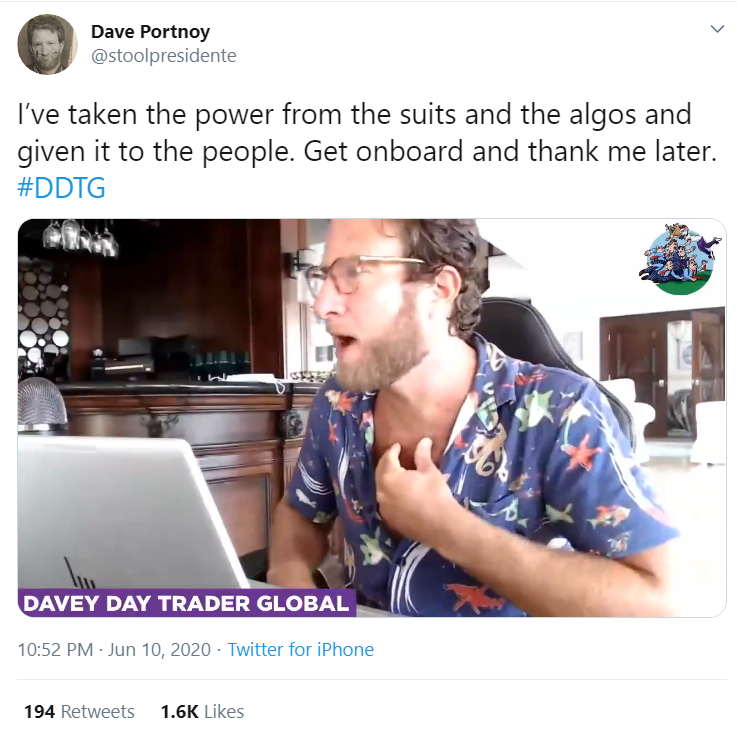 The narrative is tempting enough that had I not been involved in the financial markets for decades, I might be tempted to bite. Unfortunately, I’ve seen this movie often enough to know that it almost always ends badly.

As much as I really wish it were that simple and somebody could come in and redistribute the wealth of Wall Street, markets don’t go up forever, and on a long enough timeline, noob retail investors have a tendency to get squashed.

In any case, even though my money is on the market going down at some point within the next three months, I do hope that I’m wrong and that we can see retail traders finally winning a round.

Unfortunately though, I have that funny feeling that we’re in a different fairytale entirely. As for Portnoy, he reminds me less of Robinhood and more like the first little pig, bragging about his beautiful straw house.

Just after we hit the send button on yesterday’s BMJ Newsletter, the U.S. Federal Reserve came in with a rather unusual announcement.

Unusual, but not in the sense that they’re going this route. In fact, they first announced that they would begin buying corporate bonds on March 23, in a desperate attempt to more directly inflate the markets.

The unusual bit is that they decided to actually implement it now. If you’ll recall, the world seemed like it was falling apart in late March, and the markets certainly needed rescuing.

However, today, now that we’re back at all-time highs, the bounce was already in, retail was buying the dip and calling the bottom. This doesn’t look like a market that needs rescuing. It almost seems comical that the Fed is now injecting even more liquidity into the markets, and even experimenting with new injection methods.

I mean, what’s the point of inflating something that’s already completely inflated?

To answer my own question, there is no reason for this late stage stimulus measures, other than maybe fear, specifically fear that the curtain might finally be pulled back on the charade. This latest move was poorly timed at best, and at worst flat out gluttony.

This morning, the Bank of Japan also announced that they’re increasing their stimulus by an additional $1 trillion. The Nikkei 225 rose 5% on the news. What a rush….. 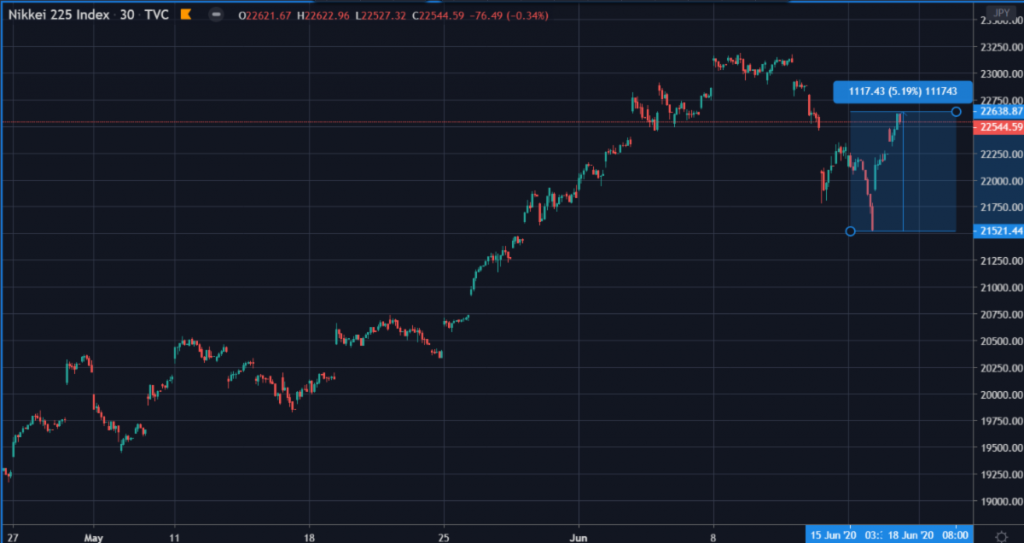 Will Bitcoin Crash with Stocks?

This question keeps coming up lately. The clearer it gets that we may be in for further pain in the stock markets, the more people want to know if bitcoin will again participate in a multi-asset sell-off.

Well, first off, we have to say that there’s no guarantee of a stock crash. Despite everything written above, there’s still a fair chance that the governments and banks manage to hold it together long enough to avoid a second dip in the stock markets.

Though there’s no real way of telling the future, so here’s my best guess….

During the initial shock phase of COVID-19, people were caught unprepared and did start to panic. The global economy went from booming to bust in just a few days and that caused investors to sell off everything indiscriminately.

In a crisis all correlations go to 1. So everything kind of sold off together including stocks, bonds, currencies, commodities, you name it. The correlation between bitcoin and the stocks became so strong that short term traders took notice and began reinforcing it. Both bots and day traders alike are now targeting a mirror trade. So the correlation then becomes a self-fulfilling prophecy.

At this point, seeing nearly identical percentage gains/losses on a daily basis in the stock market and bitcoin has become almost a bit too neat. It seems almost artificial.

In the event of a second crash, my feeling is that investors will be a lot more prepared. By now institutions have no doubt had several board meetings and drafted contingency plans for the next dip. So they’re likely to be a lot more methodical and selective as far as which assets they sell and what they keep.

I feel like a second bout of extreme volatility could potentially break the correlation between stocks and bitcoin that was created in March. Mati Greenspan Click to tweet

Of course, it’s only a theory.