Alright. So it looks like the crisis is finally over, for one company anyway.

Stock in Amazon nearly reached a new all-time high by the end of trading yesterday. In this chart we can see that the online retailer’s shares have been little effected by COVID-19 and have already experienced a perfect V-shaped recovery.

When every other retailer has been forced to close their business, Amazon is virtually the only one who can still sell things and, even though it doesn’t seem very fair, that puts them in a very strong position.

Most companies have been forced to lay off their workforce but yesterday Amazon announced that they’re hiring 75,000 more employees to handle the load in their warehouses. These are the same warehouses that are facing extreme criticism for trying to implement social distancing requirements that employees say are impossible to comply with and still meet the work quotas.

For more on that, check the latest episode of Last Week Tonight , where John Oliver, who’s been an excellent source of funny through this mess, explains the phenomenon.

Please note that there will be no Blockchain Investor Daily newsletter tomorrow due to a local holiday. We’ll resume on Thursday.

As expected, the earnings report from JPMorgan Chase revealed a massive loss in the first quarter. Net income fell by a staggering 69% to the lowest levels in more than six years.

On the bright side though, trading revenues were higher than they’ve ever been before. It’s like I told you guys, people want to trade the volatility of this market, and so this is one of the more profitable industries right now.

Another highlight of the report, and I have a strong feeling this will develop into a prevalent theme in the sector, is the high amount of capital that JPM has set on the side. Banks don’t usually like to keep cash on the books, they’d rather lend it out so they can make money from it. Nevertheless, sometimes they have to. In this case, JPM has set aside $8.29 billion for the bad loans that will inevitably come.

This figure is more than double what analysts were thinking and the fact that it’s so high is a sign that this bank is expecting a larger storm.

It’s actually not just this bank though. Here we can see the excess reserves that are being held at banks right now, which are approaching the highest levels of all time. Before the 2008 crisis, it was rare for this number to exceed $2 billion. Now it’s at $2.6 trillion and rising.

Wells Fargo is up next. Then tomorrow, we’ll hear from Bank of America, Citigroup, and Goldman Sachs. So that should give us a good picture of the finance sector.

So, how has the virus impacted different assets so far?

In this graph we can see some of the main assets that I’ve been trading since the crisis began. For the purpose of illustration, we’ll use the start date as February 24th, which is when the virus made the leap from being a China-only problem to infections showing up in Italy and Iran. 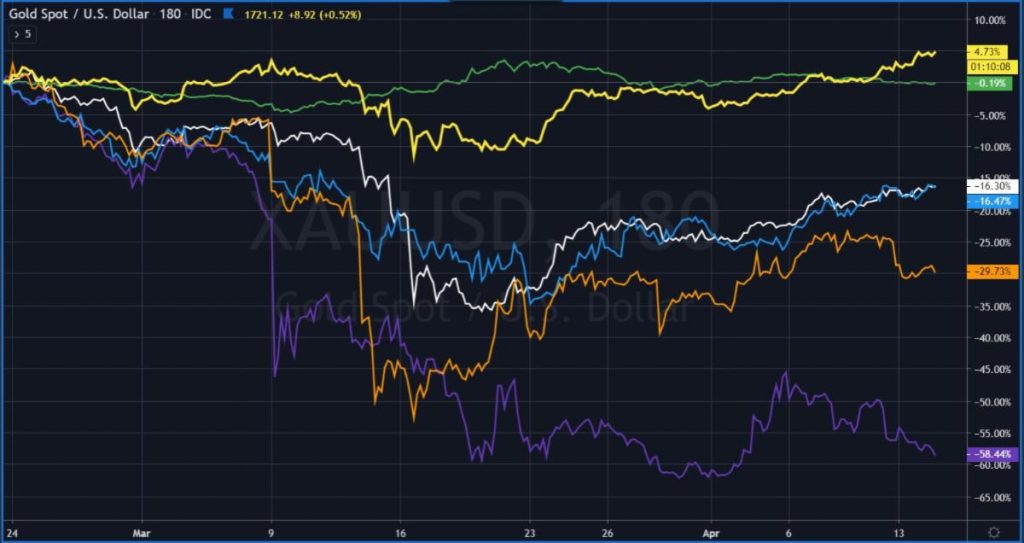 Fans of bitcoin will no doubt point out that the digital currency has risen faster than any of these assets during the last few years and so just looking at this short term data is not indicative. Of course, as the old disclaimer goes, past performance is not an indication of future results.

It is quite interesting though and quite difficult to explain why the crypto market has performed so poorly in relation to other markets, especially with the halving coming up. Mati Greenspan Click to tweet

Perhaps because it is such a highly speculative market and quite removed from the rest of the markets. With everything that’s happening in the world at the moment it’s simply not at the forefront of people’s minds. No doubt, should the COVID-19 Brrrrr brigade response be seen in retrospect as a mistake from the governments and banks, it’s good that we have an alternative.

For now, I’ll just continue buying the dip and prepare to buy more should the dip extend. The strategy seems to be working for me so far and my crypto-only account is now back in profit for the year.

Thanks a lot for reading today’s episode of Blockchain Investor Daily. This service is sponsored by BitcoinMarketJournal.com and so is completely free for everyone. So, please feel free to share it with anyone who might benefit from reading.