Those of you who are more familiar with our analysis already understand that we never make any direct market predictions.

In other words, we would never say something like “the price of bitcoin will certainly rise this year by at least threefold.”

We just wouldn’t say it, so don’t expect us to.

We did however give four rather specific forecasts for the coming decade in last year’s new year episode, all of which, I’m proud to say, are playing out so far exactly as anticipated. So feel free to review the still relevant despite COVID-19 analysis, which is titled “Perfect Vision.”

Since I know that most of you will not actually click the link, I’m glad to summarize here.

Of course the usual disclaimers apply, and I certainly cannot tell the future, but I’d say that over the past year, all four of these have become increasingly likely to materialize.

For those of you who expressed concern last week when we didn’t fill the gaps created by the CME futures contracts, it should comfort you to know that the massive gap from this past weekend has already been filled by the market.

Here we can see that this weekend’s gap clocks in at approximately $4,000 per coin. It is so much bigger than last weekend’s, which was only $3,000.

As you can see, the long red wick from today’s red candle has already dropped below Friday’s closing price, so the gap is officially closed. 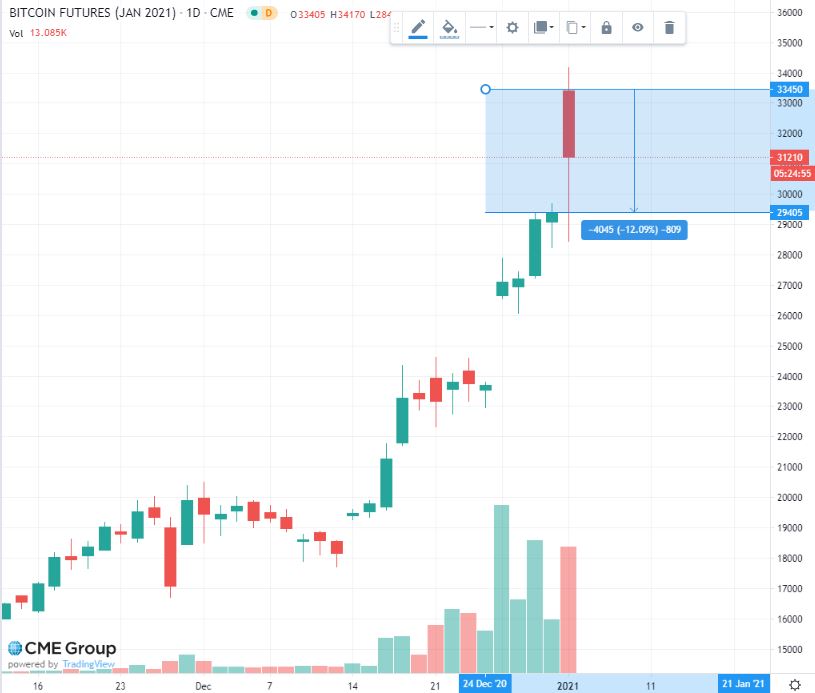 A logical person might point out that it doesn’t really matter that this week’s gap is already closed if last week’s is still open, but a superstitious person might push that logical guy out the window.

Because, on that same slippery logical slope, there’s still a gap down near $18,000 that’s yet to be covered, and that famous one back at $9,500. Good thing past performance isn’t an indication of future results.

What we’re witnessing now is actually the first normal correction (greater than 10%) since we broke above $20,000 in mid-December. Mati Greenspan Click to tweet

Just so that we’re clear on the math, and for no other reason, a healthy 30% mid-bull cycle correction would take us right to about $24,000.