That’s the number of U.S. citizens who, according to a recent poll, said that they are likely to hear something in today’s first presidential debate that will influence how they vote.

Nonetheless, 74% of eligible voters are expected to be watching on tenterhooks at 9:00 PM EST, additional data from the poll shows. Let’s be clear, this debate is not about swaying the undecided. It’s about motivating people to vote.

Which, incidentally, more than a million people have already done by way of early mail in voting, especially in seven of the top swing states.

Here we can see the states that have already opened for early voting. Highlighted are the key states that are critical for each candidate in order to win the ball of wax in just 35 days.

If you’re unfamiliar with the U.S. electoral voting system, here’s a refresher provided by the great YouTuber CGP Grey.

As a Californian, my vote will automatically be handed to Democratic presidential nominee Joe Biden even before the votes are counted, as President Donald Trump has no chance of winning the state.

So it doesn’t really matter if I vote third party, write in myself or send a dirty sock in the mail, I don’t reside in a swing state, so my vote doesn’t count.

Enough of that though. our focus today is on how the elections will affect the market.

Not as much as is currently being priced in!

This chart, obtained by screengrab off Bloomberg TV today, shows the high premium that investors are paying for volatility in November over the same contracts that expire before the election.

In short, a lot of people are paying the CBOE to hedge their positions in case of election turbulence by buying the VIX. Several portfolio managers have stated that this is overdone and are currently short selling the hype. 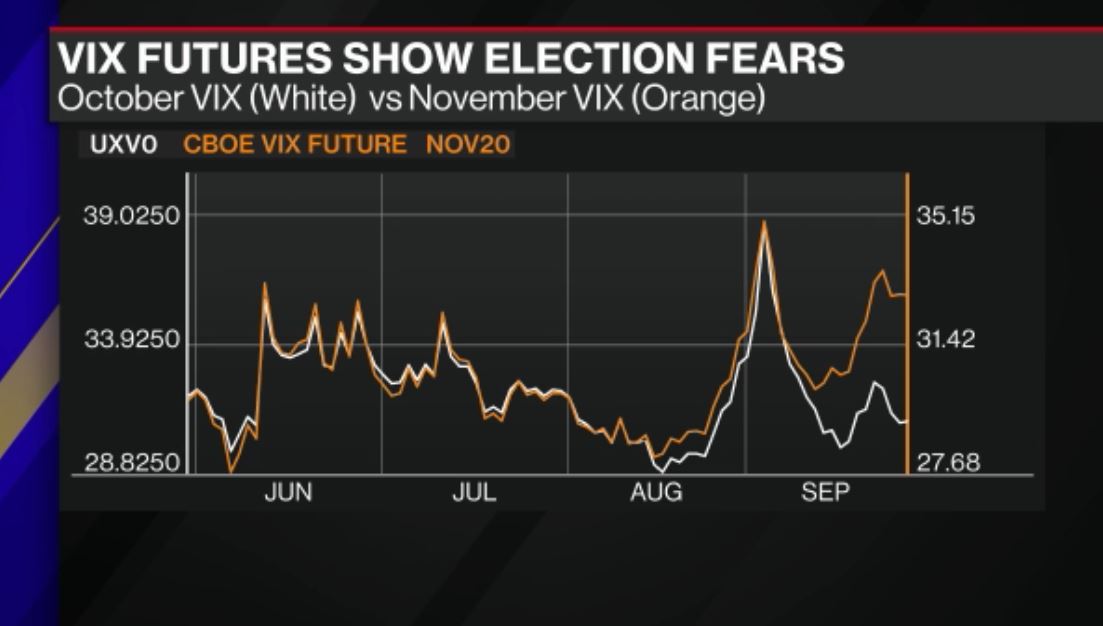 In truth, to me it seems to matter less who takes the White House and more who takes Congress, more specifically, will the two houses of Congress remain divided among the Democrats and Republicans, as they are today.

And if the House and the Senate are united, will the same party control the White House? A victory for Trump would be rather fruitless for him if the opposition takes Congress, and vice versa for a win pulled off by Biden and his running mate Senator Kamala Harris.

More updates on this to follow closer to the date of course. Later this year, this volatility is expected to die down and we should have a much clearer picture of the political landscape. For now, let’s set the mood.

“…very uncertain, as well as uneven and incomplete.”

If that’s not unnerving enough, the stronger euro is pestering the crisis-time central bank boss by slowing inflation even further.

However, even if she really wants to, it will be hard for Lagarde to print more paper, as the Federal Reserve is currently sitting on their thumbs with their arms crossed tightly, waiting for the election. I apologize for the awkward imagery, but it’s true.

No matter how hot and heavy Europe is to print more money, it will be difficult for them to initiate any injections without Papa J-POW at least willing to entertain the idea.

Meanwhile, even if Fed Chair Jerome Powell isn’t speaking himself. It does seem rather peculiar that no less then four Fed members (not Powell) are on the docket to speak today, with two of them scheduled to speak twice.

So, even if it’s not the boss talking, there’s clearly noise coming from the world’s lender of last resort.

With all that’s going on, the markets look rather indecisive today. The theme we’ve been discussing for the last few weeks is consolidation. That’s when the markets are volatile, yet flat.

Once the markets make up their mind direction-wise, we usually expect some sort of breakout from the short-term ranges. None looks more ready for this then bitcoin right now. Mati Greenspan Click to tweet

See, the consolidation has been happening so long that we’ve fallen into a rather meaningful wedge. Here we can see the falling resistance and rising support it in all its glory. 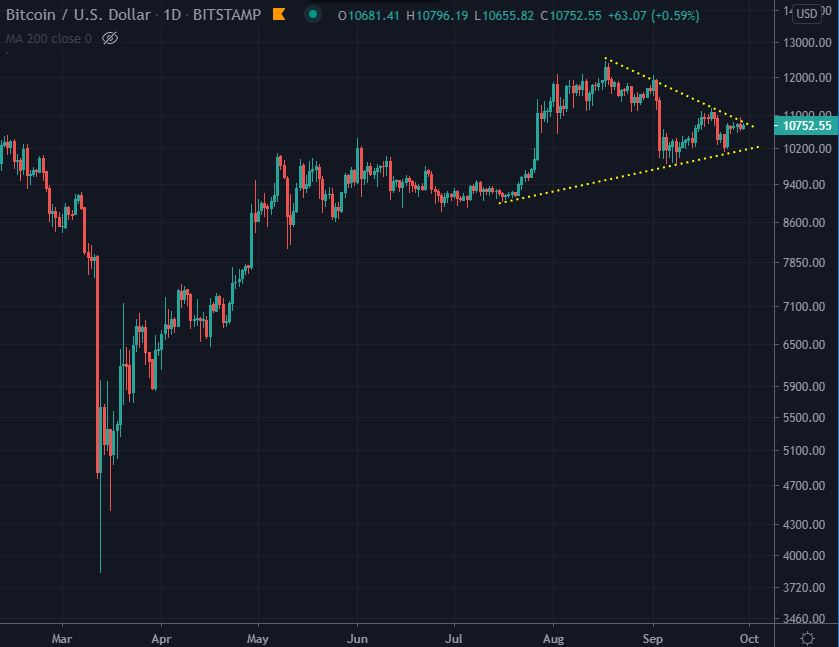 This pattern is neither bullish nor bearish. It’s more flattish. If anything, there’s a slight bias for it to be broken in the direction of the long-term trend, which for bitcoin has been “up” pretty much since inception, but as always, past performance is not an indication of future results.