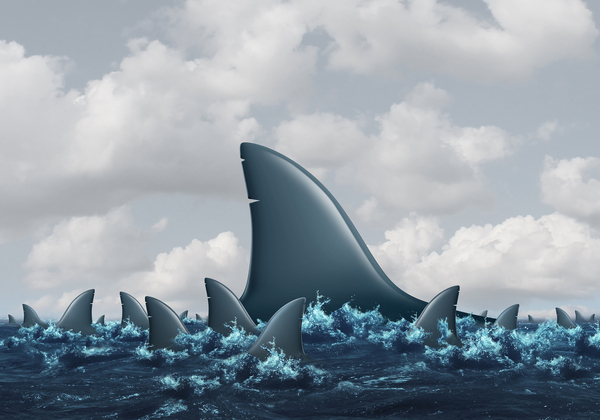 Bitcoin used to be the only noteworthy blockchain in existence, but that is no longer the case. Altcoins (cryptocurrencies other than bitcoin) first gained some notoriety in 2012 through offerings such as Litecoin, Namecoin, and Peercoin, and new blockchain-based releases like EOS have continued this trend into 2018.

After all this time and with the thousands of new coins that have been released, bitcoin has remained the gold standard. No other coin has come close to the market cap or liquidity that bitcoin has attained up to this point, with Ether being the only alternative coin that is sometimes shown a similar level of respect.

The proliferation of altcoins led to the creation of the Bitcoin Dominance Index (BDI), which is listed on a variety of crypto market websites. While far from perfect, the BDI has long been viewed as a measure of bitcoin’s role as the reserve currency of the crypto market. In 2018, bitcoin’s dominance has been on the rise once again.

So what does the BDI measure exactly? The BDI measures bitcoin’s share of the overall cryptocurrency market. Crypto market data providers also measure BDI differently. Some websites may decide to omit specific types of crypto assets from the BDI, while others will include every token that’s ever been launched.

At the time of this writing, CoinMarketCap has their BDI at 49 percent, while OnChainFX has calculated their BDI at 51.5 percent.

It should be noted that dominance indexes for other coins can also be calculated in a manner similar to the BDI. Up to this point, dominance indices have focused on bitcoin because it has remained king of the crypto assets.

Problems with the Bitcoin Dominance Index

Since BDI is based on market cap, it has limitations in terms of its ability to accurately estimate bitcoin’s dominance over the crypto market. Market cap is far from a perfect metric to use when comparing crypto assets (see this explanation on the issues with the market cap metric), and it’s usually a better idea to use a combination of data points, such as exchange volume and on-chain transaction volume (in addition to market cap), to measure the level of adoption achieved by a particular coin or token.

To close the loop here: Point wasnt the actual %. The point is that market cap /price is only a substantive metric when 1) its supported by meaningful volume relative to market cap and 2) that volume comes from a broad group of participants that are representative of market demand.

Having said that, no one has come up with a decent method of measuring bitcoin’s dominance other than BDI up to this point.

Why Bitcoin Dominance Has Been on the Rise in 2018

Until early 2017, the BDI mostly stayed around 80 to 90 percent. Obviously, this ignores the early days when bitcoin was the only game in town and the BDI was effectively 100 percent.

2017 saw an explosion of new tokens, mostly built on top of Ethereum, and the BDI fell to a low of 33 percent near the beginning of 2018. However, as previously mentioned, the BDI has rebounded to around 50 percent so far in 2018.

It’s hard to pin down one reason for the BDI’s bull run this year, but one general trend that has been illustrated over time is that altcoins tend to fall further than bitcoin during bear markets. This may be due to the belief in the market that bitcoin is a sort of digital gold, and traders will move into the safest crypto asset when the market takes a turn for the worse.

Bitcoin is a speculative investment in its own right, but the altcoin market tends to act as a sort of multiplier in terms of volatility and risk.

Going forward, it’s important for investors to understand that bitcoin is still viewed as a safe haven asset in times of uncertainty in the crypto market.