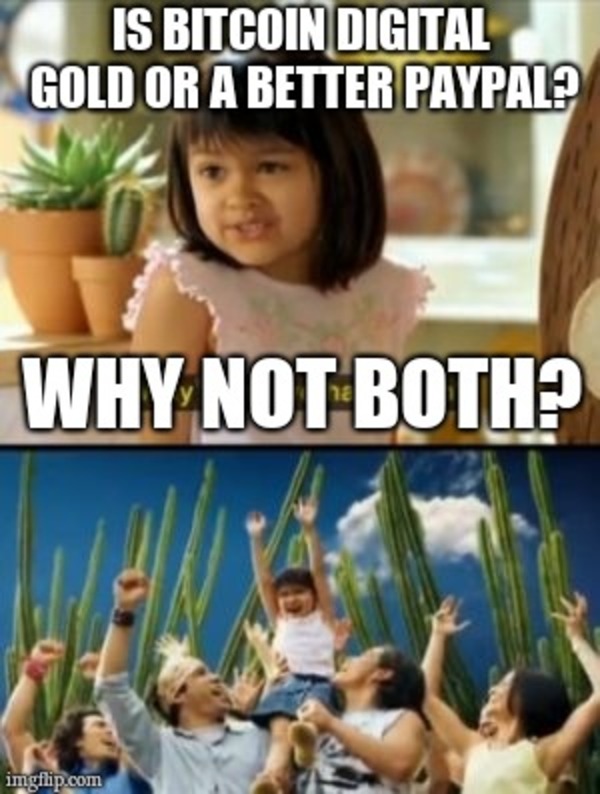 Bitcoin can be a difficult concept to grasp initially, which is why analogies are often used to paint a clearer picture for people who are new to the technology. In the past, bitcoin has been described as digital gold, digital cash, and — more simply — an improvement on PayPal.

Which of these analogies holds true under further scrutiny? Is bitcoin supposed to be a digital version of an apolitical money or is the prospect of a cheaper alternative to PayPal the key innovation here?

Let’s take a closer look at whether investors should view bitcoin as digital gold, a payments innovation for the internet, or both.

Apolitical Money for the Digital Age

At its core, bitcoin is an attempt to create an apolitical form of money for the digital age. Much like governments are not in control of the monetary properties of gold, bitcoin has a set rate of issuance that is not managed by any government, institution, or other entity. Additionally, anyone is able to transfer value via the bitcoin network in a permissionless manner — just like handing a gold coin to someone in exchange for goods or services does not come with any easily-enforced restrictions.

In this way, gold has effectively acted as a hedge against the fiat currency system ever since gold backing was removed from the major government-issued currencies in the 20th century. The idea is that bitcoin can fill a similar role in the digital age, especially as the move toward a cashless society gains more traction around the world (see this Nasdaq article on bitcoin’s value proposition in a cashless society).

The idea of bitcoin as digital gold predates the launch of the bitcoin network as the system is at least partially based on Nick Szabo’s Bit Gold concept.

“Best compared to precious metals like gold, Szabo wanted to create something that was both digital and scarce, where this scarcity did not depend on any third party trust. He wanted to create a digital gold,” wrote Aaron van Wirdum in a recent exploration of Bitgold for Bitcoin Magazine.

While there has been a lot of politics around potential hard-forking changes to the bitcoin network, these debates have turned out to be not much more than noise up to this point. For now, it seems bitcoin has not failed to act as an apolitical form of digital money.

But what about the promise of a better method of making online payments? Does bitcoin hold promise there as well?

While the on-chain bitcoin transaction fees skyrocketed to new all-time highs last year, solutions are in the works to enable more efficient payments on top of the bitcoin network. A variety of second-layer payments solutions have been proposed over the years, but the Lightning Network is the proposal that has gained the most traction up to this point (see this article for more information on the Lightning Network).

If everything works out as planned, the Lightning Network will allow bitcoin to retain its apolitical base layer that allows the asset to act as digital gold while also enabling cheap, efficient payments on layers above that core set of incorruptible protocol rules. Using the bitcoin blockchain as a base, a better PayPal can be built that allows for cheaper, faster, and more private online payments.

Asking whether bitcoin is digital gold or a better PayPal is a bit of a trick question at the end of the day because both innovations are possible with this technology.