When Mike Vishnevsky asked me at the beginning of the year what would be one of the most important crypto events of 2020, my answer was enthusiastic, but now it seems to be completely wrong.

In this video, it was actually Tim Draper who nailed the highlight quite perfectly as being the bitcoin halving event while I myself went for a more unconventional response and noted the opening of Telegram’s blockchain and distribution of their Gram tokens.

In this brief open letter, Telegram founder Pavel Durov explains why the new tokens will never move forward. Though I might not agree with everything in Durov’s letter, he does use two apt analogies that display just how absurd a decision a U.S. federal judge made when handing down the ruling to block this blockchain. As well, he does a great job of highlighting the dangerous precedent they have now set.

Personally, I was hoping that Durov would have gone forward with the launch similar to the way they refused to shut down Telegram when ordered to do so by Vladimir Putin. But alas, he does explain why even this is not a possibility. Just read the letter. Let me know what feelings it invokes.

Earlier today, Federal Reserve Chair Jerome Powell was on the camera and though he appeared quite calm, a few of the undertones in what he was saying were quite worrisome indeed. The entire message seemed to be focused on the growing divide between Wall Street and Main Street.

Before diving into this too deep, I’d just like to say that Powell has done a great job managing expectations and keeping the markets afloat. However, the Fed’s actions so far seem to have had very little affect on the broader economy. His opening sentence today was a reiteration of this fact, that the virus has had the worst impact on the poor, those that the Fed has less influence to assist.

If I interpreted his statements correctly, the message here was not to his usual audience of bankers and finance geeks but to the president and Congress, those who actually have the power to help main street. And the message was loud and clear… keep the money flowing!

One good thing, and this is not at all trivial, is that Powell pushed back hard against negative interest rates. Not extremely hard, but just the statement that the Fed is not thinking about using them is a much needed sign of sanity in these trying times.

Wall Street did not seem happy about the Fed’s statement. Not the warnings and not the unwillingness to provide an easy way out. Stock indices are down more than 1% today.

On the other hand, bitcoin and the digital markets are up. Quite a welcome contrast to the tight correlation we’ve experienced since the start of the Corona-crisis. In fact, the entire halvening event seems to have had a rather liberating affect on the digital asset space.

Here we can see bitcoin in orange and the S&P 500 in blue. This is the first case of major divergence between the two assets in months. 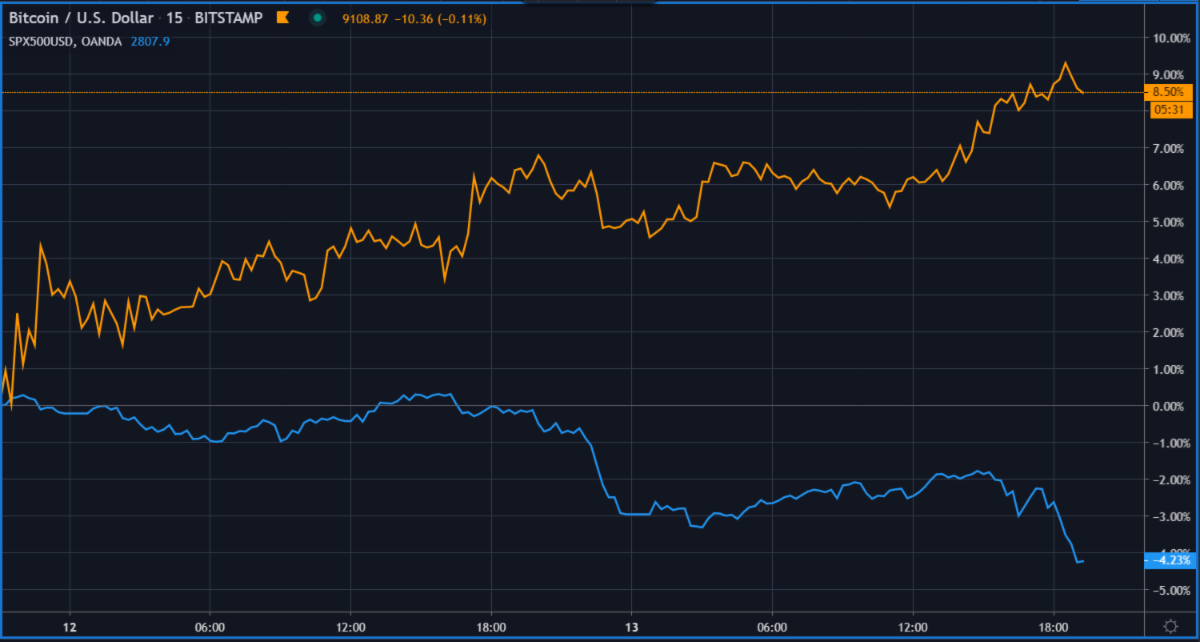 Now, as we know, past performance is not necessarily an indication of future results, but this short-term data is rather encouraging. Of course, as has been the case from the beginning, the virus is firmly in charge of the markets now, so a spike in case data or other risk events like overwhelming mortgage delinquencies or major bankruptcies could see the correlation snap back in a moment.

One last thing that I thought encouraging today was a video from one of my favorite doctors who’s been corona-vlogging since the beginning, and he’s saying that there is “compelling evidence” that vitamin D can be useful to prevent contracting the virus. So, if this is indeed the case, we should all be getting a lot more sunshine in.