With all of the coincidences lately, I’m almost surprised that the halving didn’t come out on Bitcoin Pizza Day, which is actually next Friday, May 22nd.

It did, however, fall on a little known Jewish holiday called Lag Ba’omer, which coincidentally enough marks the day that a horrible plague ended in the year 137 CE. In total, 24,000 students of Rabbi Akiva perished in the plague. According to Jewish tradition, they were punished by G-d for not following the fundamental precept of “love your fellow as yourself.”

Perhaps with a lot of love and a bit of luck, we hope that we may finally be on the other end of Coronavirus. As we can see, the number of new cases has been in decline over the last three days, and in general, it seems to have plateaued since the beginning of April.

This morning, the U.K. has relaxed its stance, changing the rhetoric from “stay at home” to “stay alert.”

It’s been nearly an entire month since Italy and Spain have begun to lift their lockdowns, and neither country has seen any spike in cases, in fact they’ve both been declining quite steadily since that time. Even in New York, where the virus seems to have hit the hardest, the numbers have been in steady decline for the last five weeks.

Of course, I’m not a doctor, but as far as the charts are concerned, it does look like the worst is finally behind us. Personally, I’m still wearing a mask and gloves when leaving the house because that’s what the local health department has recommended, but as far as the market is concerned, I’m looking forward to the next phase.

Regardless of the numbers, it’s pretty clear that many places currently on mandated lockdown are itching to get back in gear. A couple of rage tweets from Elon Musk himself are getting a lot of attention at the moment…. 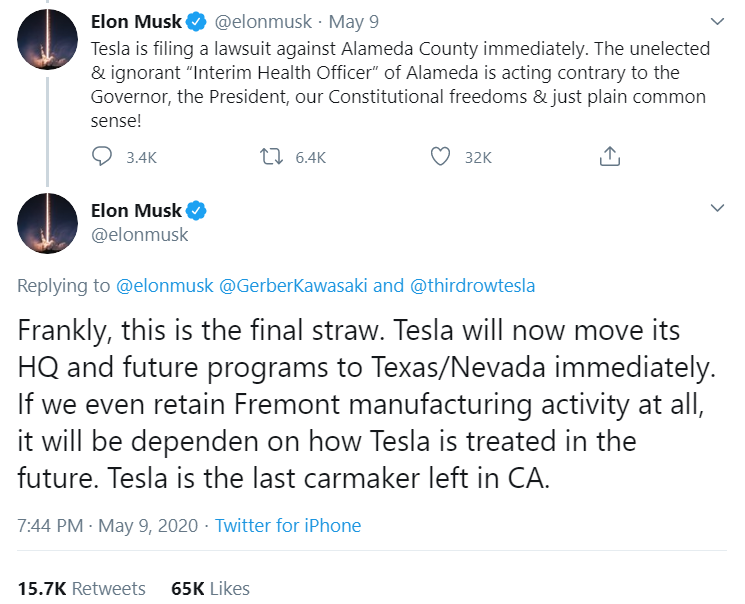 Not sure if you can feel the frustration through the screen.

As far as Tesla stock is concerned, investors don’t seem at all concerned by HQ being closed, or even Corona at all for that matter, and we can observe a perfect V-shaped recovery on the chart as Tesla returns to its former ridiculous valuation. 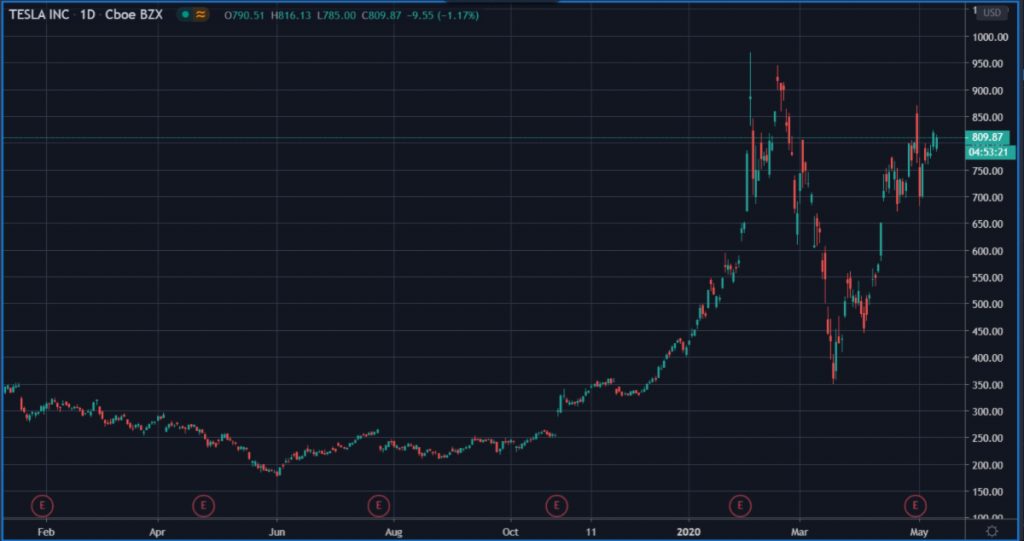 More than the Halving

Well, it looks like bitcoin is zooming through the last few blocks before the halving much quicker than the usual 10 minutes, and it’s been fun watching the halving countdown timers readjusting themselves throughout the weekend.

At the time of writing, we’re about three hours away, and the excitement on social media keeps building.

It’s not that anybody is really expecting any kind of major price movements in the short term, but as indicated above, this is more of a holiday for the crypto community than anything else. It is likely to have an impact in the price over the long term, as the reduced daily issuance makes the asset more scarce.

What I believe has a bigger affect on bitcoin’s price, especially lately, are actions taken by central banks. Mati Greenspan Click to tweet