It’s been nearly a week since the media declared Democrat Joe Biden the winner in the most dramatic U.S. election of our lifetime.

Still, about 21% of American’s have yet to accept the outcome.

The president’s claims of mass fraud have been largely ignored by the general public, but in some corners of the Internet they’re currently crescendoing in a great echo chamber, filled with hundreds of videos seeming to verify any number of different types of voter fraud.

Now, I’ve been trained in how to spot fake news before the term even had a Wikipedia page.

These videos come in on Whatsapp or Facebook showing people dropping off ballots. Then the narrator tells a story insinuating foul play.

In the end, if the video doesn’t identify who filmed it, where, when, and under what circumstances, then it’s not really valid proof of anything. Always check the source of your information.

Here’s an example of California authorities responding to one of these claims: 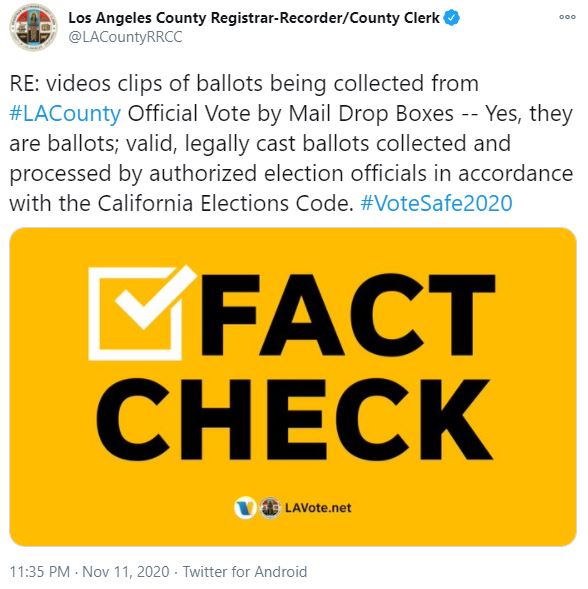 In the meantime, President Donald Trump has made himself scarce to the media, and is even seemingly laying off Twitter this week, but who can blame him when every tweet he sends is tagged as “disputed” by the platform.

The president has filed lawsuits in half a dozen states, but so far, they have resulted in very little progress.

In any case, hopefully all will be resolved on Dec. 14, when the electoral college meets. President-elect Biden has won 290 electoral votes at the time of this writing, according to the Associated Press.

So while it’s still technically possible for Trump to pull a win, the odds are probably better for bitcoin to hit $20,000 this weekend. In other words, it’s possible, but not bloody likely.

The markets can also give a pretty good insight as to what risks there may be in the future, and as they’re reading right now, volatility is about as low as it has been since the start of the pandemic. They’re not stressing. Mati Greenspan Click to tweet

Neither am I, and nor should you, even though it is Friday the 13th.

Sometimes these things have to play out, but there’s now some serious light coming from the end of the tunnel.