We’re only human, I guess. Sometimes we get so distracted by what’s right in front of us that we fail to see the bigger picture.

This happens to many newbies the first few hundred times they perform technical analysis. We tend to make the time frame so small as to be insignificant.

Only with experience do we learn the value of patience in the market, to zoom out and focus on the long-term, while keeping a keen ear on the noise, just to anticipate any lasting changes.

Another example of this is the recent news that’s currently making the rounds in crypto media that:

(Here is the breaking article in Hebrew written by markets editor and reporter Roy Katziri.)

Of course, it would be amazing for me, as an Israeli citizen, and for many others, if this passes, as it will not only reduce taxes significantly, but also encourage people to report their holdings, bringing the wider benefits of institutional crypto into the light.

From my understanding of local politics, it doesn’t have a great chance. The party proposing the bill belongs to Avigdor Liberman, who in the last election cycle ostracized himself from both the left and the right. As a result, it has few allies to pull a bill through the three voting sessions necessary to be signed into law.

The bigger picture, however, is not just cryptocurrencies and digital assets, but the wider world of financial technology. It’s true that the Israeli banking giants have been actively blockading blockchain from the beginning.

This makes it extremely difficult, if not impossible, for the young startup nation to make any headway in this space.

However, their preventive measures are not solely against bitcoin, but according to a recent government report, they’ve been playing monopoly with the entire world of FinTech.

Zooming out to a broader market, we can see a similar dynamic approaching its endgame in the United States. … 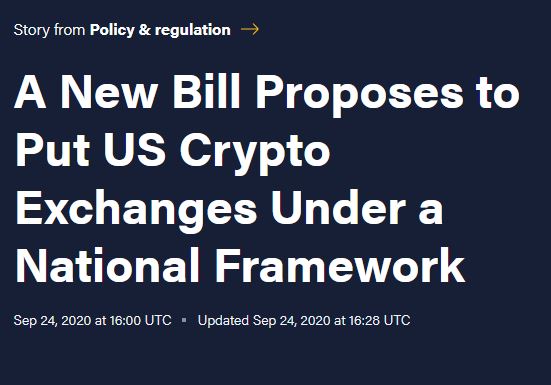 Really??? With 39 days left to the election, partisan polarization at a peak and so many open issues, this bill is gonna slide right through?

Don’t get me wrong, it’d be great if it did. The bill would give bitcoin and pals a dedicated regulatory body, allowing companies to deal in the entire U.S. market rather than going state-by-state like they do now.

Of course, here we once again need to focus on the bigger picture. As we correctly pointed out three months ago in our first ever video analysis, Acting Comptroller of the Currency Brian P. Brooks, the so-called Crypto Comptroller, is already taking care of this.

Obviously, the elections could very likely impact this as well since the office of The Office of the Comptroller of the Currency is under the Jurisdiction of the U.S. Treasury, one of the main components of the Executive Branch. So it might be difficult for him to continue his work should we see a change of power.

Finally, this Monday there will be no BMJ Newsletter as it is Yom Kippur, the Jewish Day of Atonement. As is customary, I’d like to take this opportunity to apologize to you and to everyone that I may have caused any harm over the last 12 months or more.