It has always seemed a bit strange to me how the markets just kind of stop and stare ahead of a major central bank meeting.

Sure, it makes sense that people want to know what Federal Reserve Chair Jerome Powell will say today before making any major decisions that will affect their portfolios.

But let’s face it, most momentum traders are simply buying the same half-dozen tech stocks over and over, without much regard for the other sectors or even the economy at large.

Looking at the various stock indices from around the world, we can clearly see that despite the popular narrative that stocks only go up and the general feeling that the market continues to reach new highs, many markets have still not fully recovered from COVID-19. In fact, they are far from it.

Leaving America aside for now, here we can see the Nikkei in Japan down 1.5% from the start of the year, The Bovespa Index in Brazil down 13%, the Europe 50 stock index down 11%, and last but certainly not least, the FTSE in the U.K. down 20%. 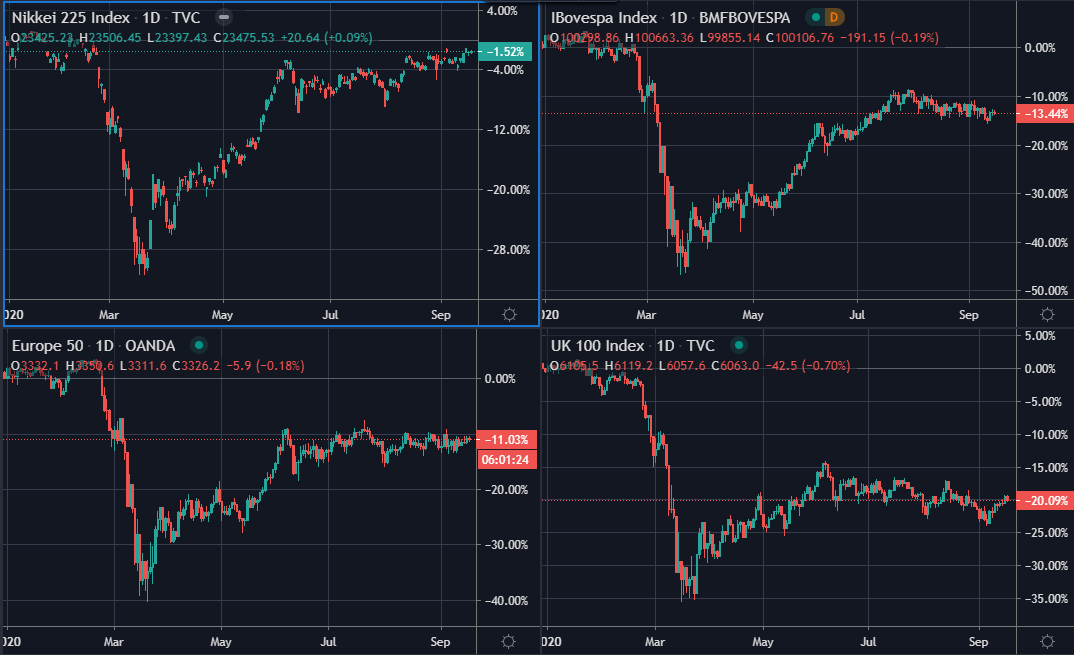 Even in the U.S. though, the Nasdaq Composite Index may be flying (+30% YTD), but the Dow Jones Industrial Average is still lagging (-1.5% YTD). If we think about, it’s really only the FAANGM stocks that have been rising, and not the entire market, not by a long shot.

Looking at those select darlings right now, we can see that each of them are down about 1% or 2% so far today. So it seems like some investors are trying to free up capital ahead of the meeting. But really, what could the Fed possibly say today that will alter such a complex strategy?

Whatever the Fed does today, or doesn’t do, there are some stocks that are not waiting. Microstrategy is one of them. Mati Greenspan Click to tweet

As we highlighted yesterday, the stock is surging following the revelation that the company has added more than $400 million worth of bitcoin to their balance sheet and has become the first major corporation to use BTC as their primary reserve currency.

Here we can see Microstrategy’s share price (ticker: MSTR) reaching it’s highest level since July 2017. The purple circle was when they released this blog about their new bitcoin-centric strategy. The last candlestick is this week, a massive move upward following the revelation.

At the moment, I’m just listening, in complete awe to this podcast with Anthony Pompliano and Michael Saylor, the CEO of Microstrategy, who is explaining the critical decisions that he’s made within the tech space, and how each and every one of them was done exactly at the right time for the massive benefit of the company.

He is also noting that if he had taken the wrong decision in each of those circumstances, they may have lost everything.

So clearly, this decision to pivot away from fiat and toward bitcoin was not taken lightly.