Can’t we all just get along?

Over the last few days, tribalism in the crypto community has reached a new peak. Luckily, there are still many in our growing industry with a level head.

The calls for an audit of the Ethereum blockchain have been growing, particularly from the bitcoin maximalists, who have long felt that bitcoin needs no counterparts in the crypto realm, nor should there be any competition for the throne.

The issue arose after some posted a simple question, asking how many ETH there are in the world, and then received several different answers from various figureheads.

Here we can see the word “supply” holding a very prominent place in Ethereum’s social feeds over the last week. There it is, nestled between the term “defi” and the hashtag #bitcoin.

I’m so glad there are people like Andreas Antonopoulos in the world, who put out an excellent tweetstorm explaining that this entire argument is silly. The legend gladly delved into the reasons why such a simple question may have many answers, especially when dealing with such a complex system. The peak for me came at the end, though, when he encouraged everyone to work together and build rather than pull at silly strings.

For me, the fact that he supports Ethereum, as well as other uses of blockchain aside from bitcoin, is enough to show that there’s a ton of value in altcoins. Perhaps not today, though…

Bit of a Pullback

Looks like we’re in the midst of a rather sharp multi-asset pullback. Precious metals, the top-tier tech stocks and even the crypto market are all down today. The bond markets are also selling off. Here we can see the yield on the U.S. 10-year Treasury, which trades inverse to price, making a strong push off the lows. 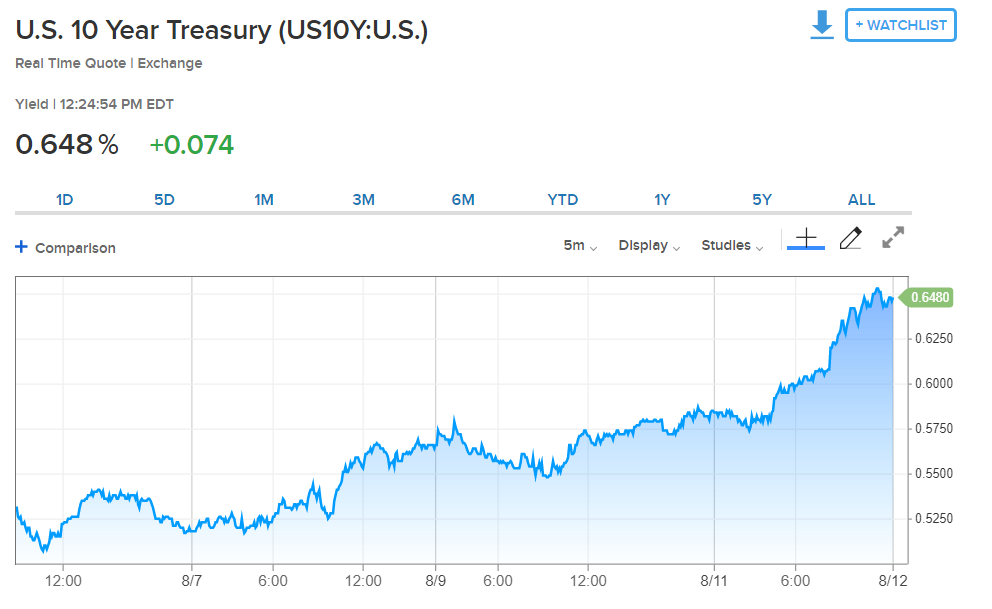 The odd thing is that I was kind of expecting this to happen, but those of you who have been following my updates would have seen that the movement I was anticipating was a U.S. dollar rally.

That hasn’t really happened though, as the currency market remains as unexciting as ever throughout this massive move. Here we can see that the U.S. dollar is actually underperforming today.

This dynamic can make it very difficult to predict what’s going to happen, especially in the short term.

Considering the above, it is entirely possible that this is yet another sign of the U.S. dollar’s weakening position on the world stage. Yes, I know it’s still quite early to be making such statements, and it would certainly be smarter to see how things play out in the next few days.

I’d say the rallies continue, and everyone out there buying the dip today will be smiling by the end of the month, but there’s certainly a fair amount of risk in that. Mati Greenspan Click to tweet

Yesterday, a can-making company issued some corporate junk bonds with a fixed income of less than 2.9%, and they sold out like hot cakes. This is yet another sign of how much investors are starved for yield at the moment.

For the risk of buying junk bonds, investors should be getting upwards of 11%, but with global yields being artificially squeezed by the central banks, it’s no wonder that people would rather just take the risk of high-momentum stocks.

Now it seems that even Robinhood is doing their part to crack down on this momentum play, and have now taken steps to limit it on their platform.

Going forward, their app will no longer show the most popular stocks of the day, a section that is seemingly responsible for the Hertz bankruptcy rally we saw a few weeks ago.

Wondering if this slight change can actually affect markets. Guess time will tell. Have a lovely day!