I’m not sure whether we have any Chinese readers, but if you are in China, I’d like to wish you a very happy Dragon Boat Festival.

I was just reading up on this fascinating holiday, which apparently is a tribute to the ancient philosopher and poet Qu Yuan, who was set up by his peers, sent into exile, and then later drowned himself in the river.

Now, billions of people honor him by throwing delicious stuffed sticky rice dumplings called Zongzi and racing Dragon Boats in order to try and save Qu.

During the 2008 crisis, many large financial institutions, realizing that they had a lot of bad assets, decided to funnel some of the good money out of their system in the way of bonuses for bankers, dividends, and buybacks. It seems the Federal Reserve has learned its lesson and has become a bit more progressive, and so yesterday…

There are some who say this isn’t enough, and that it still leaves room for some capital to flee the system, but at least it’s a start. It’s good to see that bankers will at least now be limited in their ability to throw dumplings out of a sinking boat, and let’s hope they are not racing to save a system that’s already been dead for many years.

Stocks are traveling withershins again today, as the boards read blood red. The Dow Jones Industrial Average is down more than 2% as of this writing. Still, we haven’t really surpassed the lows from the brief sell-off two weeks ago so I wouldn’t really call this a panic, and investors are able to maintain a high degree of composure.

Here we can see the three main stock indices in the U.S. Note how the S&P 500 is giving a serious test to it’s 200-day moving average, a benchmark that the Dow has already broken, but the Nasdaq hasn’t even come close to. This just tells you how much investors are gravitating toward tech for the most part. 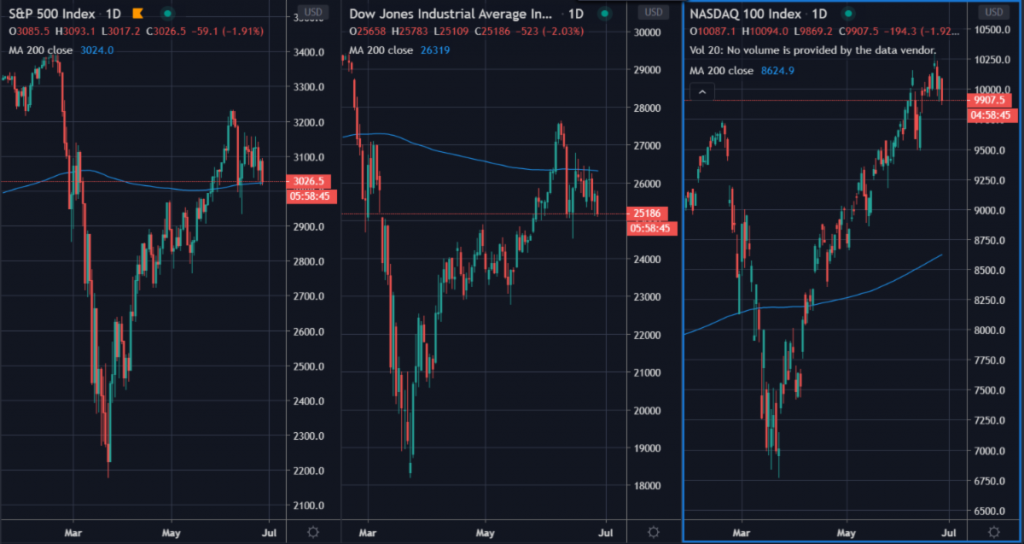 The selling is certainly understood from a narrative side. We have Vice President Joe Biden gaining in the polls, and coronavirus news is getting worse. The U.S. broke 40,000 new cases in a single day for the first time yesterday.

Just as I’m writing, we’ve heard that Texas, one of the key swing states, has re-shut its taverns. This is a double headed blow to the market, both for its health and political implications.

We have seen the stock markets shrug off bad news before, as they remain quite detached from the underlying economy. This is a dynamic that we’ve pointed out a few times already, but I did want to highlight something I recently noticed.

This detachment seems to be confined to the stocks and high-risk markets alone. All other markets, including commodities, forex, and bonds have not really “recovered” since the March sell-off.

Here’s a perfect example of that in the U.S. 10-year bond yields, which fell sharply during the initial COVID-19 impact but have not made any sort of attempt at a recovery since then. 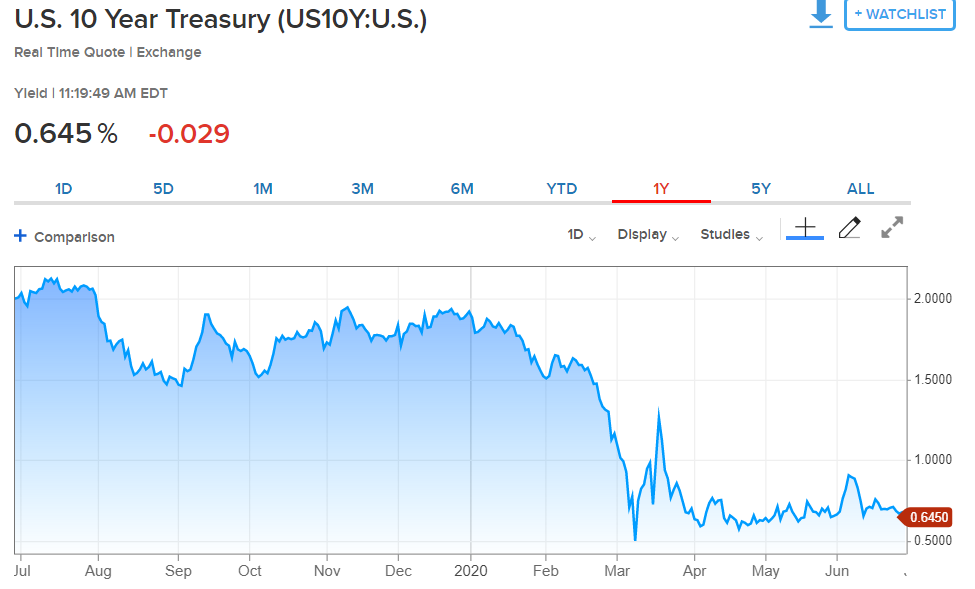 . However, other risk assets like crypto have also been appreciating, providing a wonky dynamic as of late.

Though the stocks are looking at a weak end to a strong week, I did want to leave you with some fireworks for the weekend.

Here’s the recording of Day 1 at the fantastic online CoinGenius summit yesterday. The recording is about 10 hours of airtime, and starts off with the amazingly talented Meltem Demirors with a bullet.

I’m on at approximately 1:25:00 on a panel with Wolf of All Streets’ Scott Melker and CryptoBirb, but the entire thing just seems like pure fire.