For all the antagonism I’ve been harping on the new-wave investment mentality lately, there are several star qualities of the contemporary retail trader that bear highlighting.

This story is an emblematic example one of those star qualities.

Here is a bit of background. …

For months we’ve been seeing popular protests on the streets of Hong Kong, as the government there slowly progresses from democracy to where it is now, a puppet of China.

While the United States was wrestling with COVID-19 two weeks ago, Hong Kong’s parliament managed to pass a law that basically allowed China to arrest any person for any reason, on the auspices of anti-terrorism and national security. Fancy words for stripping the people’s right to free and peaceful protest.

Though they vowed the law would not be abused, most recently they’ve arrested a man named Jimmy Lai, the CEO of a local left-wing newspaper, the Apple Daily, ostensibly for content that they published that was anti-China.

An emotional Lai was on Bloomberg TV this morning, explaining how if he was arrested for simply exercising his free speech, then the company simply cannot operate going forward.

This story puts a new light on on the latest phenomena, in which we’ve seen a string the bankruptcy pumps, where stocks manage to completely detach themselves from traditional valuation models and soar purely from on the basis of behavioral economics and ideology investing.

It’s just our generation, the millennials, doing what millennials do and voting with our money. Allocating our capital to influence the future in a way we imagine it, and putting our investments where our hearts are.

For all the political wrangling and bipartisan bickering and feet dragging we’ve seen from the U.S. government in the last few decades, this one really takes the cake.

Are you freaking kidding me?!?!

The last provisions from the CARES Act expired more than a week ago, and with millions of Americans are still on varying levels of mandatory furlough, the U.S. government failed to write a check that will sustain people, allow them to pay the rent and put food on the table. Instead, they’re going on vacation for AN ENTIRE MONTH!!!

Honestly, I’m not pointing blame at the left or the right. It’s their lack of ability to work together that brought us here. If your response to reading that previous sentence is “but the left/right…” then it’s time to admit that you are part of the problem.

In any case, analysts on Wall Street are already doing their best to completely detach themselves from what’s happening in government and even from the upcoming elections, which are now less than three months away.

No doubt the markets have done very well under President Donald Trump. This graph of the S&P 500 has highlighted Trump’s 2016 election in a purple circle. 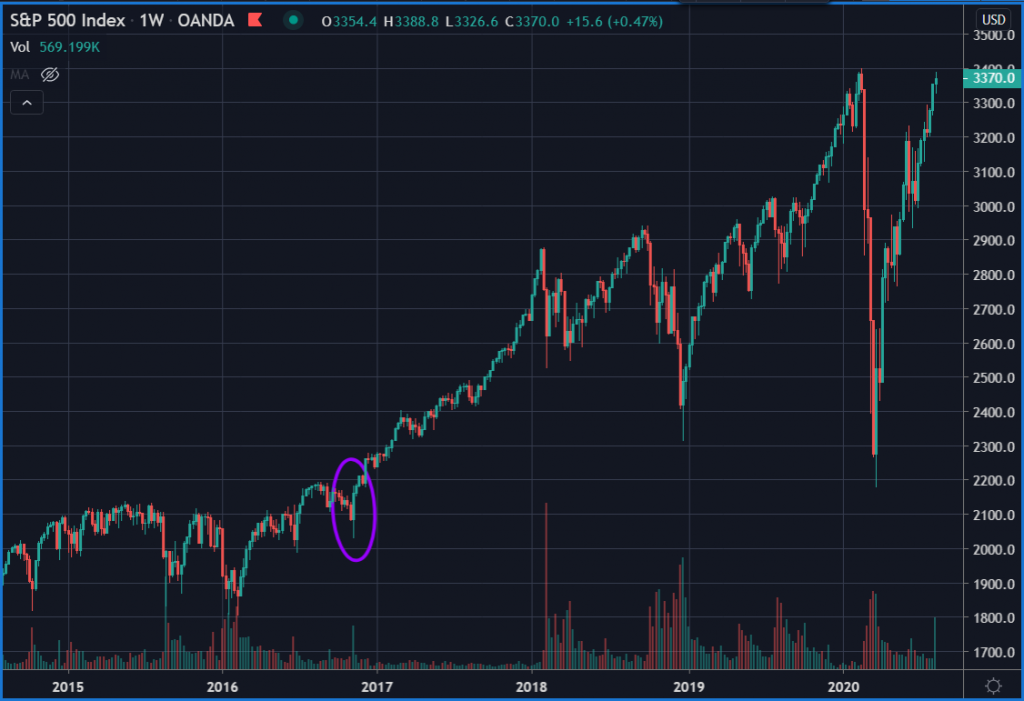 The new narrative that has emerged over the last week is that presidential candidate Joe Biden is good for stocks.

Yes, he’ll raise corporate taxes, but he’ll also pour free money into the economy at an unprecedented rate and possibly even smooth out the response and recovery from the pandemic, positive qualities that should outweigh any setbacks of higher taxes.

Now the question becomes, can he win? Or will the market need to readjust the narrative again if Trump takes it?

Yesterday, the entirety of the crypto community got together to watch Dave Portnoy take his first step into crypto since he became the self-proclaimed leader of the current Wall Street pump. If you haven’t seen it yet, here’s the prerecorded footage of Davy Dave and the Winkelvii.

What really got me about this was what really got Portnoy. His mind was completely blown by the fact that Elon Musk plans on mining gold in outer space. I mean, really? You’re having a meeting about financial freedom for you and all your followers, and that’s your big takeaway?

We can also almost physically see the gears turning in his head on everything that comes to token creation, especially when it comes to pump and dump schemes. You mean we can have a Dave Portnoy coin? Well, good luck getting through the Securities and Exchange Commission with that one.

There’s no doubt in my mind that now that he’s got his finger on the trigger and a fresh account to buy crypto, he will figure out just how the low liquidity and current momentum of link can send the poor coin for a ride through the stratosphere. I fear the winter that will come after though.

In any case, whether caused by him or not, we can see that there was a noticeable and much-needed leg up in bitcoin following Portnoy’s dramatic entry. 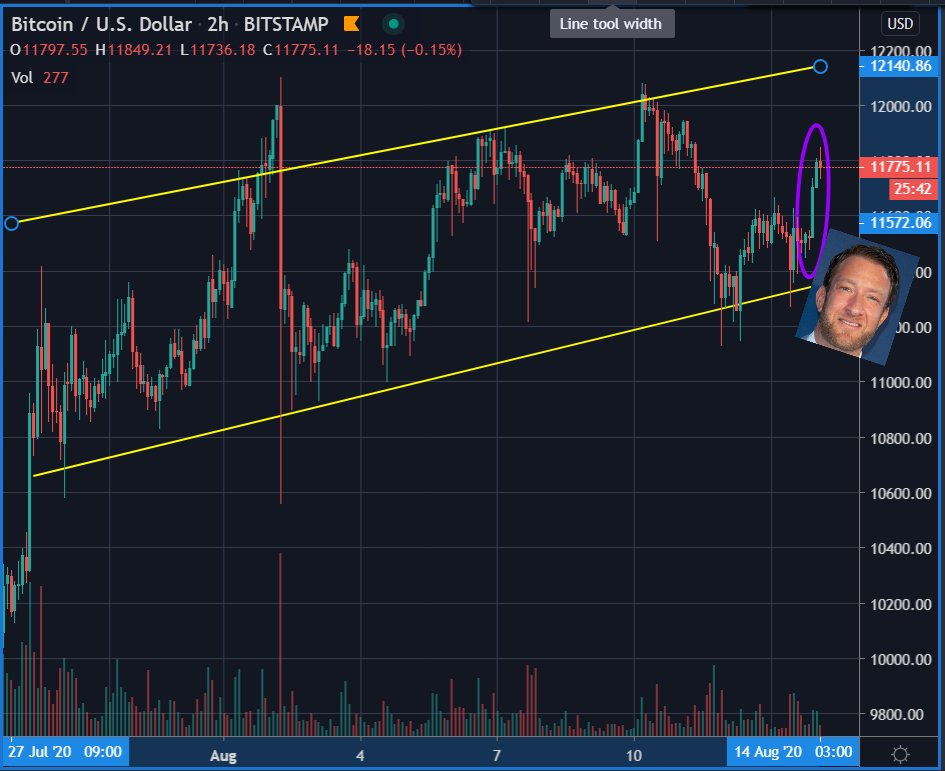 Now, if he really wants to prove his influence, he’ll adopt Anthony Pompliano’s full tag line, or at least a revised version of it.

Leaving the glam and politics of the matter, as many bitcoin whales will no doubt tell you, causing a short-term move is easy, but doing it consistently is impossible. There’s only so much monkey business this market will accept before chewing you up and spitting you out.