Of the many things that happened over the weekend, perhaps the most significant was the announcement from Warren Buffett that he’s now investing in gold and gold-related assets.

They say you can’t teach an old dog new tricks, and this is a huge shift in investment principals for the Oracle of Omaha. Long contending that gold is not a worthwhile asset to invest in, Warren is now very abruptly seeing the appeal.

This is about money printing. The printer is working overtime, and this is obviously causing Buffett and his board grave concern. Don’t take my word for it though.

Please watch this two-minute clip (transcript below) in which a clearly rattled old man ponders the impact of money printing and negative debt.

While Buffett is perhaps not so sure how to react to a world that no longer values bonds and government debt, others are sure, and darn sure!

While some people, like Microstrategy’s CEO, completely understand bitcoin and crypto, others are making a mockery of it.

I myself had a run in on Twitter over the weekend with 1,000 meme frogs who seem to think that YOLO is a great investment strategy as long as it’s kek (funny).

Not that I have any particular issue with Pepe. The downbeat cartoon frog has been somewhat of a comfort for many a crypto investor during the bear market, but now that we’re in a bull market has become a bit insufferable.

Many crypto accounts have now put Pepe as their profile picture and are advocating that traders buy ChainLink.

For those of you who are not familiar, ChainLink has been growing in popularity as a strong contender in the smart contracts market. More specifically, it’s designed to translate things that are happening in the real world into data on the blockchain. 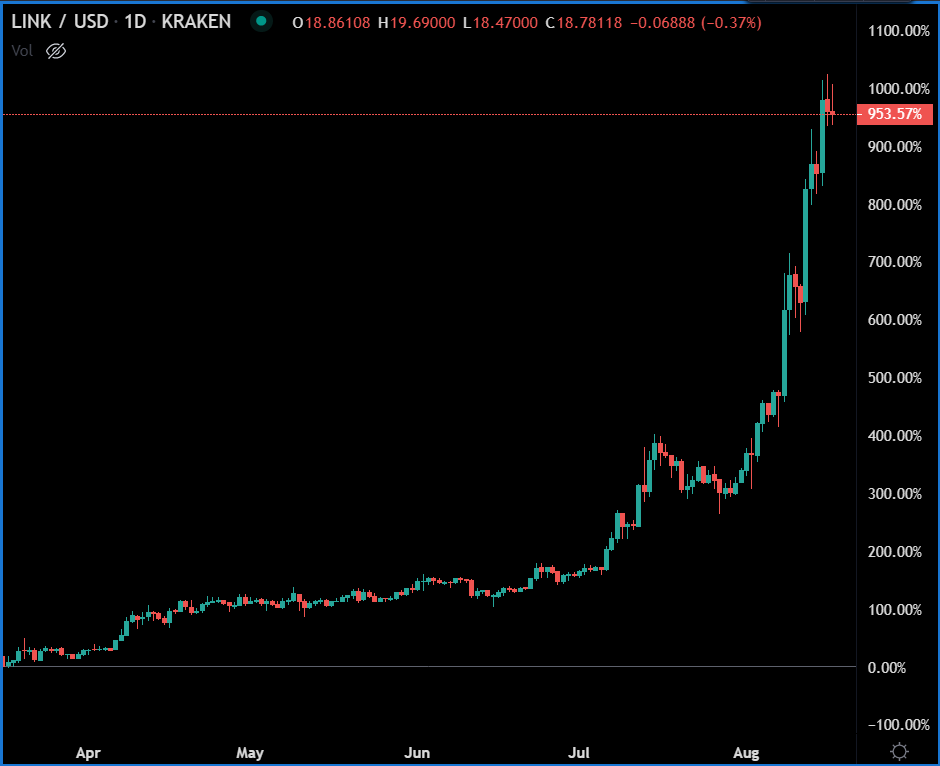 Not really sure at which point the frogs started showing up, but apparently my suggestion on Twitter that it might be a good idea to take profits at this point was seen as a capital offense.

Now we have Dave Portnoy openly and deliberately promoting altcoins. His claim that pump and dump schemes are encouraged in crypto is not a good look for the community, and certainly a step back from building the internet of value.

If you, or anyone you know is involved in this stuff, I wish you the best of luck, but please keep in mind that unless you are extremely lucky or extremely skilled, you can and probably will lose your entire investment.

So, my personal feelings aside, if people want to invest in a meme or follow an influencer to the moon, that’s perfectly fine, as long as they understand the risks. My feeling is that these days, most people who are around do, almost assuredly more than in 2017.

The world is moving forward and the cycles are progressing.

Stocks are mixed but what really concerns me is the sate of the U.S. dollar. Buffett’s speech is more than an echo of the mantra that’s been emanating from the likes of gold bugs and bitcoin maximalists for many years.

Now that money is free, everything else starts to get expensive. As the Oracle said…

“Well, we’re gonna be negative for a long time. Uhh … You better own equities. Or, you better own something other than … than debt. I mean, it’s remarkable what’s happened in the last 10 years. I’ve been wrong in thinking that … that you could really have the developments you’ve had … uhh, without inflation taking hold. But uhhh … we have 120 odd billion in treasury bills (bonds) and they’re basically paying us nothing and they’re a terrible investment over time but we need to hold them to be sure that we can pay our liabilities. …”

“If the world turns into a world where you can issue more and more … money and have negative interest rates over time. Uhh … I’d have to see it to believe it and we’ve seen a little bit of it already but I’ve been surprised … I’ve wrong so far. but I don’t see how you can create … uhh … If you can have negative interest rates and pour out money and create more debt relative to productive capacity, you’d think the world would’ve discovered it in the first 1000 years instead of just coming onto it now.”

Or something along those … uhhhh … lines.