Now that all the major U.S. banks have released their earnings reports, we can begin to understand some of the recurring themes.

First, as we’ve mentioned, volatility is up, so revenues from trading are good. Not good enough to cover the downside, but the titans have overall been profitable in Q1. Of course, timing would suggest that they haven’t felt the real impact of COVID-19 just yet as the lockdowns only really started in the U.S. in the last week or two of the quarter.

What we were really looking for in these reports, and the upcoming reports of other sectors, is a taste. What are various companies doing in response to the crisis? The finance sector did not disappoint.

In the fractional reserve banking system, banks are required to hold a minimum amount of cash on their balance sheets. Despite the Fed removing this requirement completely last month, banks are now raising their cash buffer quite substantially.

It’s quite doubtful that any serious number of loans have defaulted in the second half of March, but some forecasts have stated that approximately 30% of American homeowners will be be unable to pay within three months. That’s not to mention small businesses, which is looking none too pretty…

Forbearance is the concept that legal action will not be taken against people for missing payments on their debts and that can likely happen for a few months, especially if the authorities continue the flow of free money. If the economy can be kick-started within a short time then we should come out alright. If not, well… let’s not think about that for now. The market certainly isn’t.

The jobless figures released by the U.S. just a few hours ago were not good. Yet, some analysts are not bothered and so far today, the markets seem to be holding up fine.

Usually, a report of 5.2 million more people claiming unemployment would be terrible. However, the figure is actually slightly less than the 5.3 million that analysts had forecasted. Now, this may seem a bit silly but that’s how things work on Wall Street. How the number looks is less important than if it was better or worse than expected.

Here, take a look at Forex Factory’s website where the figure is prominently displayed in green since, the actual number well less than the forecast. 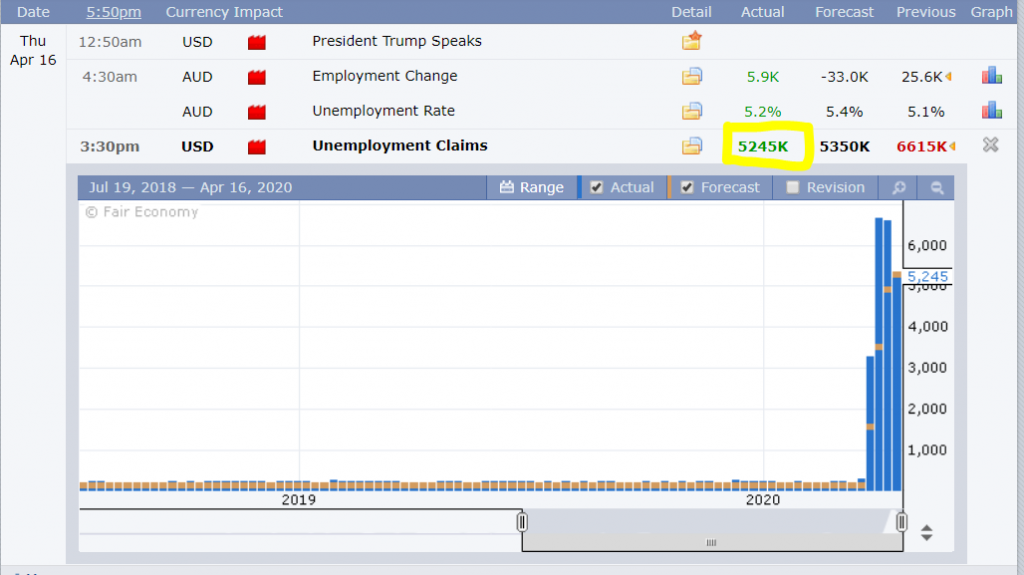 I do hope you can forgive my cynicism, but this isn’t like the virus data where we can try to interpret a decline in the numbers as good news. In fact, these figures are more likely to be a mere reflection of the government’s ability to process and report unemployment than an actual snapshot of the number of unemployed people.

Later today, President Trump has promised he’ll release the outlines for his plan to reopen the economy. Even though it might be a bit early to enact, it’s nice to know he’s thinking ahead and we look forward to seeing what he’s come up with this time.

A Wealth Of Stablecoins

Not to be one to miss out on the COVID-19 opportunities, Facebook has announced that they’re going forward with the Libra project… just not as originally intended.

The new changes include enhanced due diligence (KYC), compliance with anti money laundering provisions and global sanctions. So it will no longer be a ‘permissionless’ network. In addition, they seem to have given up on a single Libra currency that is backed by a basked of fiat currencies and instead have opted to offer several stablecoins that are pegged to existing currencies.

As the owner of the project put it… 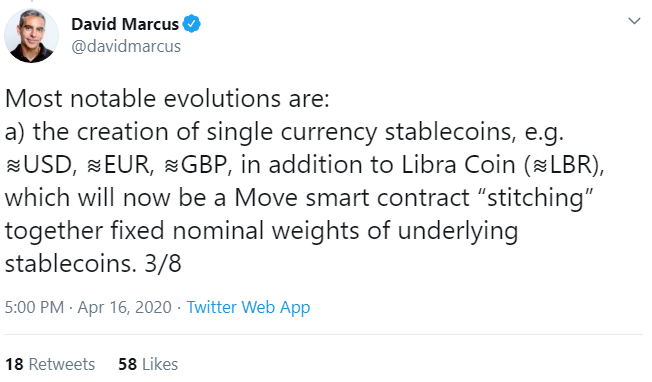 Not sure if anyone told David that on Tuesday, the Financial Stability Board released a document recommending an all out ban and/or heavy regulation of the stablecoin market. Or, perhaps they did tell him and this is why he’s made this announcement now. Or, perhaps Facebook had something to do with the release of these new restrictions in the first place. We’ll never know really.

What we do know is that the amount of stablecoins in the world has been increasing rapidly lately, just as the money supply in the rest of the economy has been expanding, and is now above $8 billion.

As the old saying goes… this is good for bitcoin.

Facebook’s new watered-down version of Libra is an admission that even they are not able to replicate the immaculate conception of bitcoin and that their blockchain will no longer be a serious competitor to any existing cryptoasset. Mati Greenspan Click to tweet

It will however be a serious contender to Paypal, Venmo, and Square.

The FSB’s proposal could very well push many fence sitters back into the ‘unstable coin’ market. As well, it has the potential to clean up one of the murkier parts of this industry.

So, yeah. Not surprised that bitcoin is up 6% today.