Are central banks scared of cryptocurrencies?

Their actions seem to indicate that they are. Today, the European Central Bank officially announced that it will initiate the investigation phase for a digital euro. 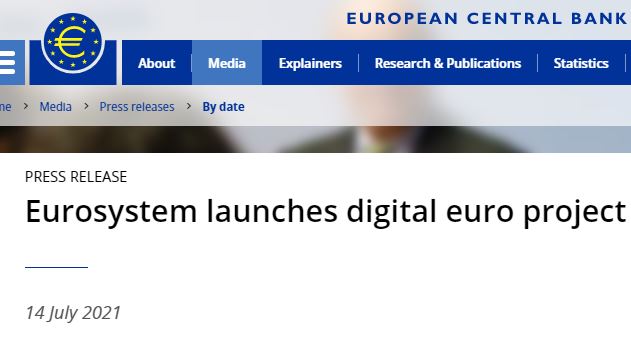 The individuals behind this announcement appear to be positioning the potential digital euro as a better version of bitcoin.

The digital currency would leverage user preferences, be environmentally friendly, have privacy features, and also have the ability to prevent illicit activities. Let’s just ignore the problem that the last two items are directly contradictory.

A video that has been circulating, in which Bank for International Settlements General Manager Augustin Carstens did not seem to realize he was laying out a dystopian future, highlighted this perfectly.

It’s about design choices, at least that’s what they’d have you believe.

When answering a question about central bank digital currencies during a congressional testimony, Federal Reserve Chair Jerome Powell stated that “you wouldn’t need cryptocurrencies if you had a digital U.S. currency – I think that’s one of the stronger arguments in its favor.”

The ECB launching a two-year investigation into which design choices are preferred by users is pretty funny.

Let me save them some time. People want the separation of government and money.

People generally don’t appreciate it when unelected officials at central banks take unilateral decisions that affect all of us.

One of the most controversial actions taken by central banks is all the money they create, a point we discuss quite frequently in these updates.

The concern, of course, is that too much money printing could lead to rampant inflation. As we saw with yesterday’s consumer price index figures, higher inflation is already here, and with the Fed continuing to print dollars, it could likely get worse.

The question is: Is bitcoin a valid hedge against inflation?

Apparently, there’s somewhat of a hot debate on this within the crypto community. A Cointelegraph article that was released this morning, with quotes from yours truly, gives a fairly good overview of the various opinions.

The most recent data would seem to indicate that the digital currency is not a good inflation hedge, at least not from a trader’s perspective.

The CPI inflation numbers have been rising rather steadily during the last few months, while the price of bitcoin has been falling. However, gold prices have been acting similarly. So what does that tell us?

It tell us nothing really. As with most things bitcoin and crypto, we don’t really have enough data to answer this question.

To illustrate, here’s a graph from The World Bank showing global CPI stats since 1981. As we can see, for bitcoin’s entire existence, inflation has been phenomenally low. 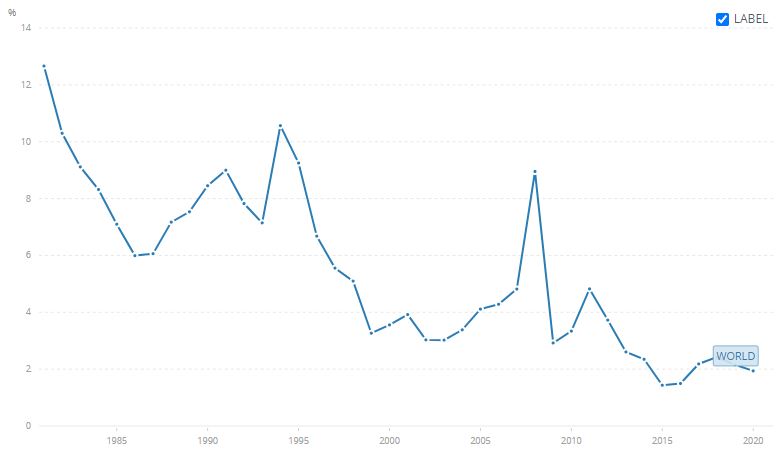 As one follower in South Africa pointed out, bitcoin has been protecting his wealth quite well against a rapidly deteriorating rand.

So from that perspective, calling bitcoin “a hedge against inflation” would be massively underselling its benefits.