Ok. Last week was totally nuts. But this week, will probably be a lot crazier. Until now, we’ve basically been flying blind as far as what the impact on the virus on the economy has been. Now, we’re just starting to see the numbers… and they’re pretty ugly.

A reduction of 13.5% in China’s industrial production might not seem like much but a quick look at the graph will show that this figure is actually terrible.

Retails sales in China are down 20.5%. I’m not going to add the graph for that one but it looks almost the same. A number that is virtually always positive is now in deep red territory. This sudden slowdown in economic activity is already far worse than anything we saw in the 2008 financial crisis.

Although it’s still a bit early to see any numbers from the United States, the Empire State Manufacturing Index did come out today at it’s worst level since 2008. Sill, the feeling is that we’re still early days into this.

Truth is, the markets don’t really know how to accurately price any of this simply because we don’t know how much longer it will last.

Last night the US Federal Reserve did their part to try and stabilize the financial markets. In fact, the action they’ve taken is probably the most aggressive central bank action of our lifetimes.

The rash action doesn’t seem to have helped very much. As we’ve diligently pointed out in these QE Newsletter’s several times, monetary policy cannot cure the virus. That’s not to say they didn’t do the right thing but essentially, they’ve emptied their entire clip and are now left with no ammunition left.

We’re off the lows for now but there’s really no telling just when and where the market might bottom out.

Due to the circuit breakers and loss limits in the stock market, we really can’t compare crypto to it anymore. Instead, bitcoin has transitioned to trading more like a commodity during these troubling times.

In this graph we can see bitcoin in orange, silver (white),and the S&P 500 in blue. The stock market of course was flat due to the limit down, which was only released at the market open. 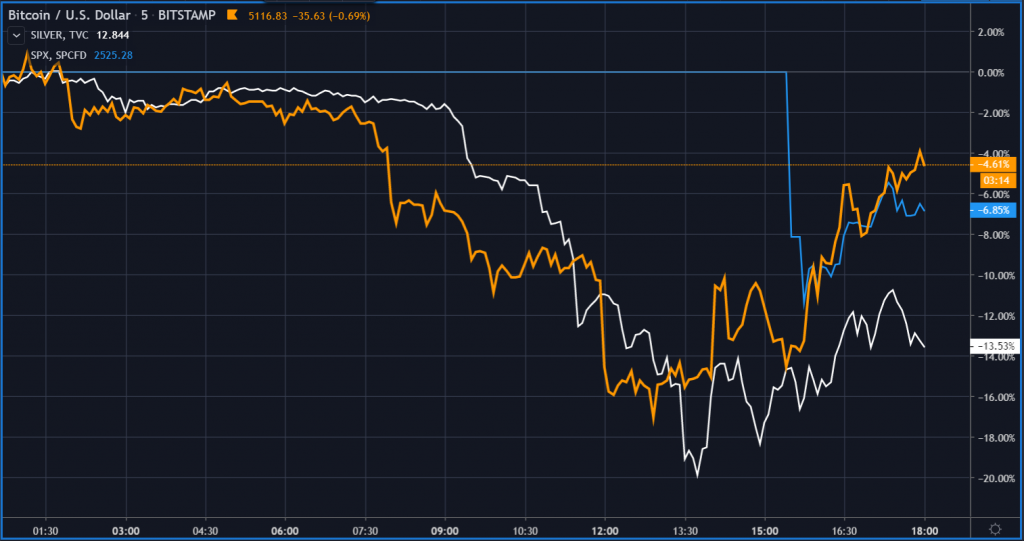 Truth is, everything is kind of falling together, just the stock markets have the added benefit of ample downtimes.

At least as far as asset depreciation is concerned, bitcoin isn’t getting the worst of it. As we can see above, silver was down 20% at one point today.

Also in line with traditional markets, bitcoin volumes are exceptionally high right now. Across the top 10 exchanges we can see a total of $2.6 billion worth of bitcoin traded and on the blockchain itself, the numbers are as high as they’ve been since the mid-2019 rally.

Many thanks for reading and thanks to everyone for the amazing feedbacks and comments. I really appreciate that so many of you are taking the time. If you’re a first time reader, make sure to subscribe now to never miss an episode. Have a wonderful day and don’t forget to wash your hands!