It’s not at all uncommon for a founder to sell stock in his own company but when they sell a lot it can raise a few eyebrows. I mean, if they believe in what they’re building why sell it? Though I wish we were talking about myself, QE is still way too small to be having this discussion. No, I’m talking about the richest man in the world…

The amount is roughly 1.5% of Jeff’s net worth. In 2017, he pledged to invest about $1 billion per year in space exploration. That wouldn’t quite explain the $1.8 billion mentioned above, nor the $3 billion worth that he sold in August.

Far be it from me to tell the guy what to do with his money but ever since the founder of Litecoin, Charlie Lee, sold all his Litecoin at the top of the market in 2017, alarm bells start ringing in my head on stuff like this. Just three days ago Amazon put out some outstanding earnings that propelled AMZN stocks to a new all time high (purple circle). 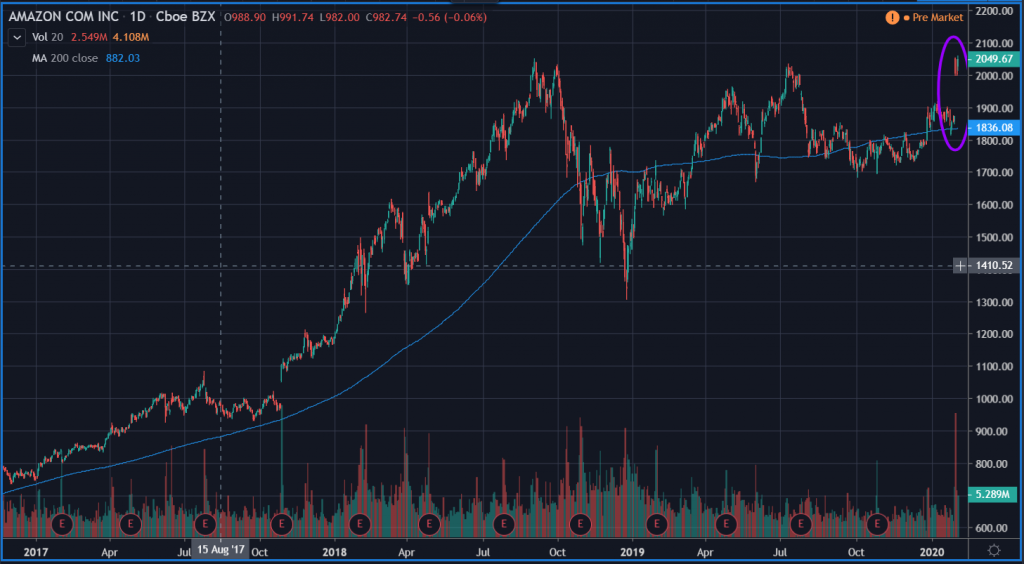 Now, obviously there are stark differences between Bezos and Lee. Charlie sold off all at once whereas Jeff’s been selling regularly for the last few years. So, no doubt he’s been feeling that the market is overvalued for a while now.

Much thanks to the Fed who keeps pushing up prices no matter what the economy is doing. Will be interesting to see how long it lasts.

The State of the Union address from President Trump last night was a prime example of just how divided the United States is. The highlights include a very middle-school like exchange between Donald Trump and Nancy Pelosi, the one who initiated the impeachment proceedings against him. First Trump left her hanging on a handshake, then she tore up a copy of Trump’s speech behind his back.

In the meantime, the Iowa debacle showed just how silly American democracy is. The results have started to come in and with 71% of the votes counted we can see Buttigieg (is that really how it’s spelled?) and Sanders tied for first. However, videos emerging on the internet of several delegates being decided by a coin toss hardly inspire faith in the system.

Analysts on Wall Street seem to be celebrating this fractured state in the United States. What’s good for Trump is good for the markets. What they don’t seem worried about at all is the Coronavirus. Most seem to agree that the Communist Party is under-reporting the amount of fatalities and the entire country seems to be on lockdown. Nobody is leaving their homes. No doubt travel is being affected but so far the affects on oil and travel stocks seem rather tame.

Man, people really have a lot of faith in the Fed these days, either that or a miracle.

And speaking of miricles…

Is it Altseason Yet?

One of the defining attributes of altseason are the random pumps on various coins, whether deserved or not. Mati Greenspan Click to tweet

Dash, Zcash, BSV, Tezos and several others have been tracking some serious gains lately. This chart here shows some of my favorite alts (sorry if I forgot any) against bitcoin. As we can see, Orange Coin is under-performing. By far. 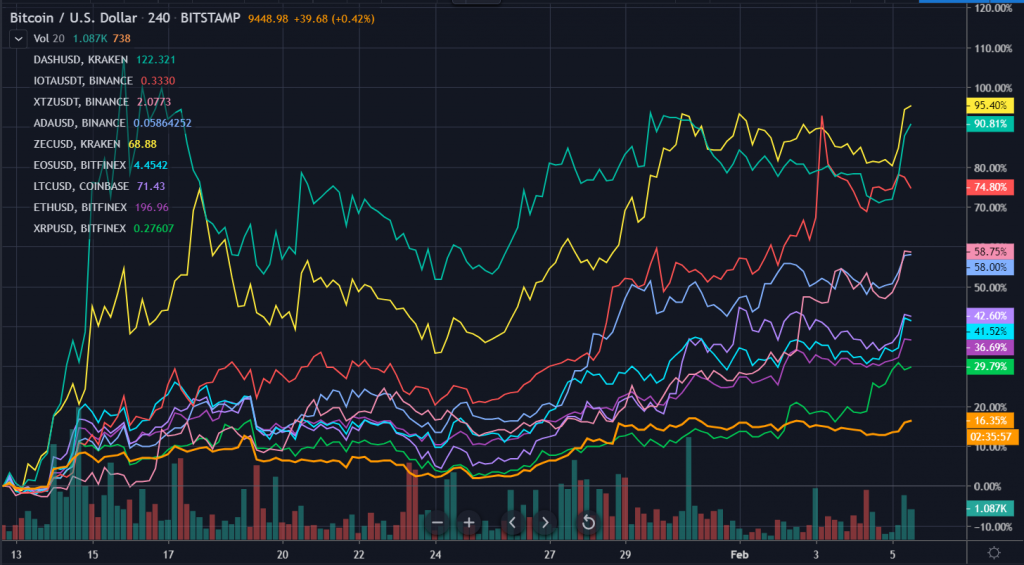 Throughout the last two years and especially in Q2 and Q3 of 2019 we saw a great consolidation into bitcoin where the entire industry became quite risk averse and the BTC hodlers were rewarded. But it does seem that now, just as in the traditional markets with Tesla and the Nasdaq, investors are embracing risk.

We can see it as well in the BTC Dominance Index, which has been declining steadily since the start of the year. 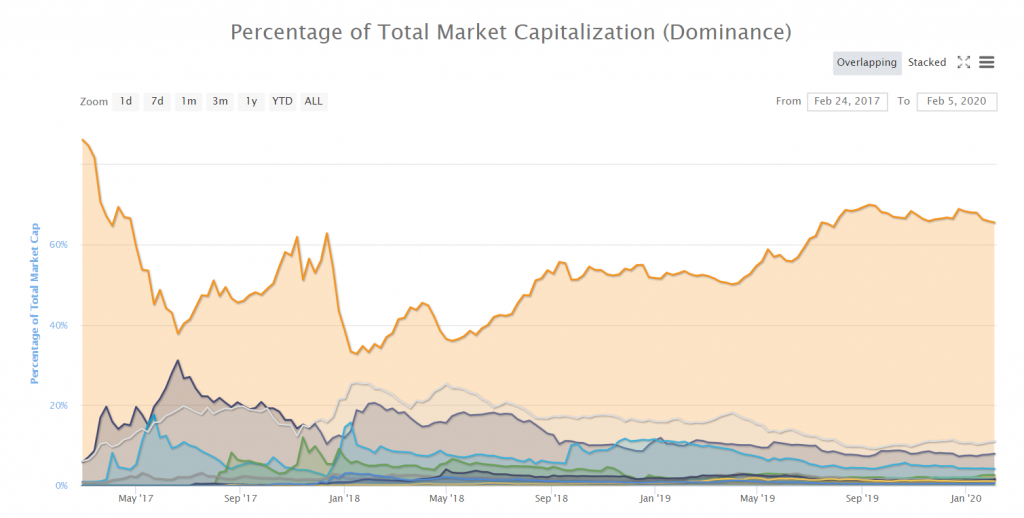 As you can see in my portfolio at the moment, we’re going all in and overhanded on the alts. #ToTheMoon or until things turn around. We’ll see.