Just as the crypto markets were raging yesterday and many altcoins were already clocking double digit percentage gains, the US Secretary of the Treasury, Steve Mnuchin, got on the bullhorn once again to warn the general public about these dangerous assets.

The comment came during a visit to Congress where he was asked about the President’s recent efforts in this area, to which he responded by thanking the House for increasing their budget in this area and reassured them that a set of new regulations will be revealed very soon.

Honestly, I’m not really sure what they think they can do that will be more effective at catching criminals and terrorists than the new FATF rules, which are set to kick off in June. Europe and most of Asia have already implemented their rules and regulations to govern the cryptoasset space. It’s almost as if the US administration wants to be left behind.

In any case, all the drum beating had virtually zero affect on the raging bull market and even seemed to add a bit of fuel to the rockets, which are currently zooming on course to hit the moon.

Would like to apologize in case it wasn’t clear. A few of our readers wrote in yesterday regarding the sub-heading that we wrote in this section here yesterday “Coronavirus is good for stocks.”

Was really hoping that my sarcasm was apparent but often times when writing these intentions can get lost and I’m sorry for that. It really irks me that the markets are shaking this off so easily. Not only from a market and risk analysis perspective but as someone who has studied history and understands what’s at stake here.

From my experience, it does usually pay off to be optimistic when making investment decisions and I do hope that we see a full recovery very soon. However, looking at the facts today, it doesn’t seem like this is the case. The number of officially confirmed cases has skyrocketed overnight by 33% (chart below) and the government has also reported an additional 242 fatalities, bringing the official death toll to 1,370.

The sudden spike can in some part be explained by a new method for diagnosing patients but in any case it’s very difficult to trust the numbers being reported by China and there is a feeling of this whole thing spiraling out of control.

At the moment, the World Health Organization is coming under severe scrutiny for the way they’ve handled this so far, and two senior officials in China have been sacked today. It’s still not at all clear which factories have resumed production nor at what capacity.

The stock markets are moving lower on all this but many indexes are still holding at higher levels then when it all started. Here we can see the Shanghai Composite has nearly seen a full recovery of the New Year’s gap.

The crypto community is celebrating today as one of the most famous sports teams in the world, FC Barcalona, has announced that they’ll be releasing a new cryptocurrency for fan engagement. After the disappointment from the NBA regarding Spencer Dinwiddie’s tokenized contracts, this news is really cool because it actually has a shot at going mainstream.

With over 300 million fans, this is about as mainstream as it gets. A total of 40 million $BAR tokens will be sold at €2 a piece. Mati Greenspan Click to tweet

As it seems, they will only be available for sale through the club’s official app so at least initially, these will be no free market or floating exchange rate.

The real question that I have though are regarding the use-cases. Of the few articles I’ve read, I don’t see very many so far. From the looks of it, the main one will be to vote in surveys and polls about the team, possibly including select songs that are played after a goal is scored. Doesn’t seem all that sexy if you ask me but at least it does go a long way towards legitimizing the industry.

As far as price is concerned, we do have a fair bit of volatility today as bitcoin is testing the key level of $10,000 to see if it can support the price. Here’s a zoomed in version of the channel we’ve been tracking. 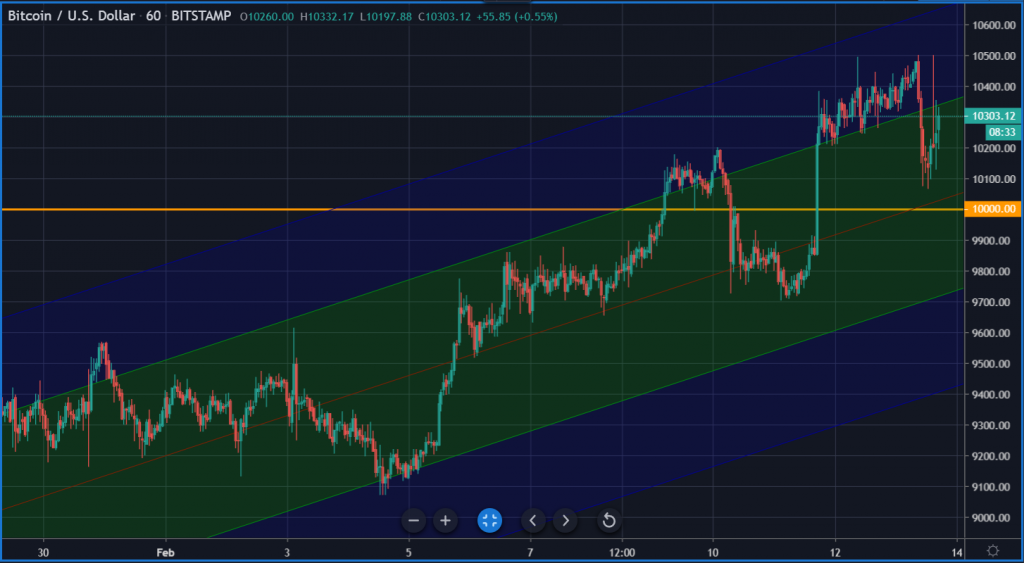 As you can see, even if the price does end up falling a bit south of the orange line, the broader upward trajectory would still be in tact. If it does hold though, it would be totally wumbo.