Images of barren shelves have been flooding in over the weekend. As it seems, some consumers are getting Coronavirus fever and rushing out to stock up on staples.

In an effort to gauge the impact of the panic, I put out a post on social media last night asking for people to report what they’re seeing. So far, 271 people have confirmed that they are indeed seeing signs of a frenzy. 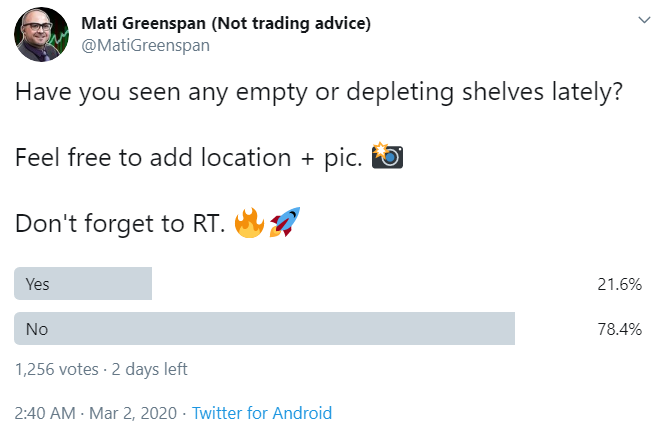 The good news is that reading through some of the comments there does seem to be a method to the madness. In places where it’s warm right now, there doesn’t seem to be much panic or shortages at all. In the places that are seeing the worst of it, it’s the common sense items that are running low. Hand sanitizer, bottled water, and toilet paper top the list, followed closely by long lasting food items like pasta and rice.

So clearly some people are panicking off the back of this media fueled frenzy. From this we can also see that most shortages in goods are likely coming from the demand side and not from any sort of supply shock. Clearly, retail sales numbers are going to be through the roof!

Enjoy the market volatility and don’t forget to wash your hands.

After one of the most violent stock slides in recent history, it seems like we’re coming in for a bounce today. Whether this is sustainable or not is irrelevant for now. There’s certainly enough cash on the sidelines ready and waiting to buy the dip.

The recovery comes despite some dismal data out of China. As we can see here, the manufacturing numbers for the month of February just narrowly avoided a multi-decade decline.

Asian stocks didn’t seem too affected by this though. The Shanghai composite index is now resting pretty much exactly where it was before the Lunar New Year Celebrations.

A large driver of the new direction of course are the central banks who are now responding to the panic in kind. The People’s Bank of China has been pumping money in since the start of this and we now have a commitment from the Bank of Japan that they’re ready to act with further stimulus.

In the United States even though the Fed hasn’t expressly said anything on the matter, the market now fully expects them to take drastic measures at their upcoming meeting on March 18th.

Before that though, tonight it will be the Reserve Bank of Australia who takes the stage at 2:30 PM in Sydney. Analysts seem to be forecasting an emergency rate cut from 0.75% to 0.50%. Will they give into the fear and pressure?

Right in line with the risk-on feel in the rest of the markets, the digital asset market is having it’s own rally today with many of the altcoins gaining 5% or more in the last 24 hours.

It’s about time for a bounce too.

After taking the entire weekend to test the bottom between $8,200 and $8,500, bitcoin is seeing a strong tug north today. Mati Greenspan Click to tweet

A move that does seem to be supported by the mining community before the halving.

As we can see in this chart, the short term hashrate has leaped to a brand new record high…

What exactly this might mean for the price is unclear to say the least. Perhaps some new rigs have come online, or perhaps miners are running their machines extra hot going into the halving. It could also be a factor of block-times. As we’ve seen recently, short term hash data can be fairly unpredictable.

In any case, it does make for a nice narrative for a rally. Let’s hope it lasts.