As an investor, and in general as a human being on this planet, it often pays to heed the sage advice of Monty Python and always look on the bright side of life.

In 2012, many people were downright convinced that the world was about to end and judging by the debt crisis in Europe the markets had very little to whistle about. Yet, somehow, things pulled through and those who went in with an optimistic mindset were laughing and singing in the end.

Those who panic sold their stock in 2008, most likely missed out on of the greatest stock rallies in the history of the world. Of course there’s no way of knowing where the bottom of this market is. We may have seen it already, or it could be another 50% down over the next year. It really depends on how long the lockdowns last and how soon we can start to understand what life will look like post-virus.

The good news is that over the weekend, we’ve heard good news about a potential vaccine both from Johnson & Johnson and from Oxford University. So, even though it might be about a year away, it seems we finally do have some sort of likely time frame for this thing to be a non-issue.

No doubt, there will still be a large shakeout of companies that were struggling going into this and might not make it out the other side but that which doesn’t kill you makes you stronger. So I do believe that even if it’s difficult to realize right now, everything that happens is for the best and we will emerge from this, perhaps badly beaten, but nonetheless victorious.

Volatility across the markets is way down today and stocks seem a lot calmer today with some slow but steady gains. Oil, on the other hand is now trading at just $20 a barrel.  A level not seen since 2002. 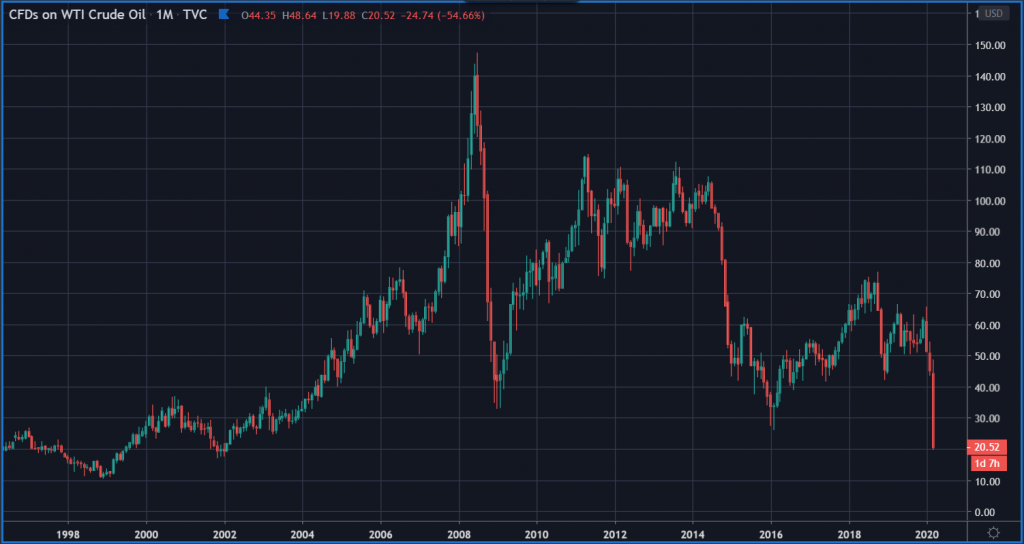 At these prices, it really is difficult for almost any producers to make a profit so the entire industry is really in a lot of pain right now.

Not that it even seems striking given the current market conditions but for those keeping score, the ratio between gold to crude oil is now at it’s highest level in a recent history. One ounce of gold now buys approximately 80 barrels of oil. 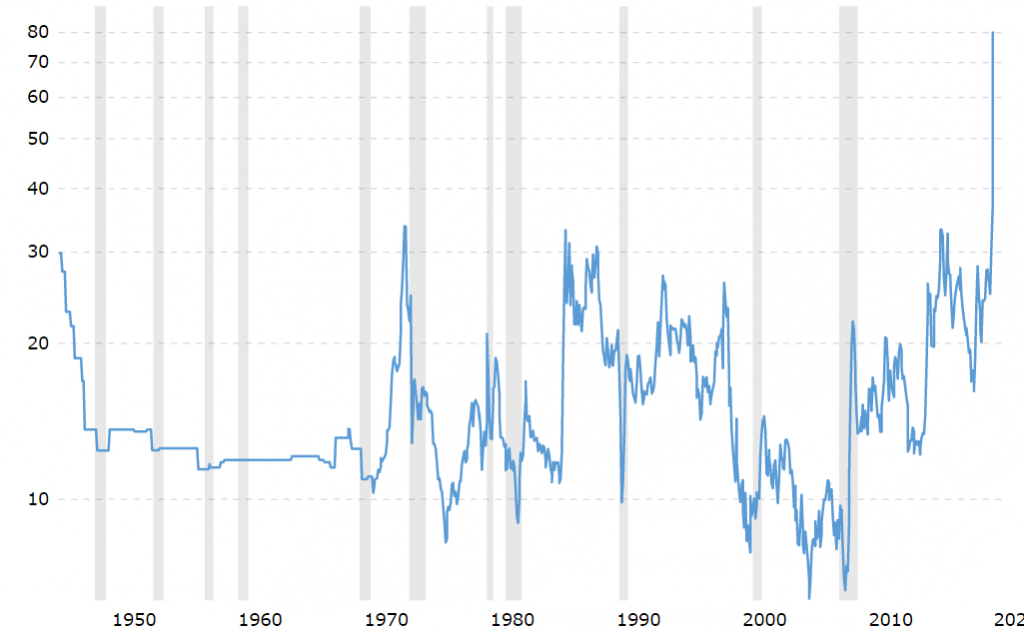 President Trump did recently comment that he might intervene in the oil market should prices get too low. So even though we have no idea what he might do, no doubt Saudi Arabia and by now even Vladimir Putin will likely be willing partners to try and put a floor on this thing.

Even though bitcoin and the alts have very much been taking a back seat throughout the course of this crisis, it seems that lately they’ve been gaining their volatility edge back.

Just in line with what’s happening in the traditional markets, sentiment is mixed but things are green for today across the board. The difference is that while the stock indices are pushing 3%, bitcoin is up about 8% today, which is good for speculators I guess.

For what it’s worth, the correlation that we’ve been tracking between bitcoin and the stocks does seem to be coming down just a bit but does still remain quite elevated, which is good for bitcoin’s individualism.

There seems to be an existential question going around the crypto market at the moment where people are saying that if bitcoin can’t rise in this environment than it probably doesn’t have much of a reason to exist at all. After all, the narrative of using bitcoin as a safe haven in times of financial stress has been a rather strong one throughout the years and so now should really be BTC’s time to shine.

Seriously though, I actually don’t remember that part of the white paper.

Bitcoin was invented to give us an alternative to money that is controlled by governments and banks. Nothing more, nothing less. Mati Greenspan Click to tweet

The volatility is largely due to the fact that it’s quite new and adoption rates are unstable, which leads to large levels of speculation. So, for me, a measure of success would be to see bitcoin remain on a slow but steady incline, rather than zooming towards the moon due to global uncertainty.

Gold knows what’s up. It’s in no rush to get anywhere. In fact, it’s been an excellent store of value throughout this shakeout and has managed to hold up with only slight losses since the crisis began. It would be nice to see bitcoin doing the same but also understandable that a lot of the weak hands have left the market in these turbulent times.

On the bright side… Bitcoin’s great success through these trying times is that aside from the price and a noticeable reduction in the hashrate, bitcoin hasn’t had any fundamental changes. The network continues to act as intended, spinning up a new block every 10 minutes, making sure that nobody double spends their coins and that the coins in your wallet remain unaltered, that your transactions remain uncensored, and (the big one) not debased by excessive top-down creation of value.

We look forward to the halving event in just about 43 days from now. It’s gonna be a big one.