With so many Initial Coin Offerings being announced every week, investors need some way of sorting the good from the bad.

The situation is similar to the early days of the California Gold Rush. Hundreds of thousands of prospectors flocked to California during the mid-1800s, seeking their fortune in gold. Early gold prospectors would use shallow bowls called “mining pans” to sift through gravel from a river bed. It was hard, slow work, as you can see in this video:


As gold mining became more competitive, miners developed new methods, such as the gold cradle:
These inventions quickly gave way to new techniques like hydraulic mining, which used powerful streams of water to blast away chunks of rock:
In other words, gold extraction rapidly evolved from crude, simple inventions that one person could operate, to sophisticated machines that required huge teams and immense capital.

When it comes to ICOs, we are still in the “mining pan” stages, but we at Bitcoin Market Journal are quickly innovating new methods of sorting the gold from the gravel. Here’s how we do it.

You can think of ICOs as a new investment opportunity that sit at the intersection of a startup, a Kickstarter campaign, and a traditional IPO. To be clear, an ICO is none of those things, but it shares qualities with each of them. 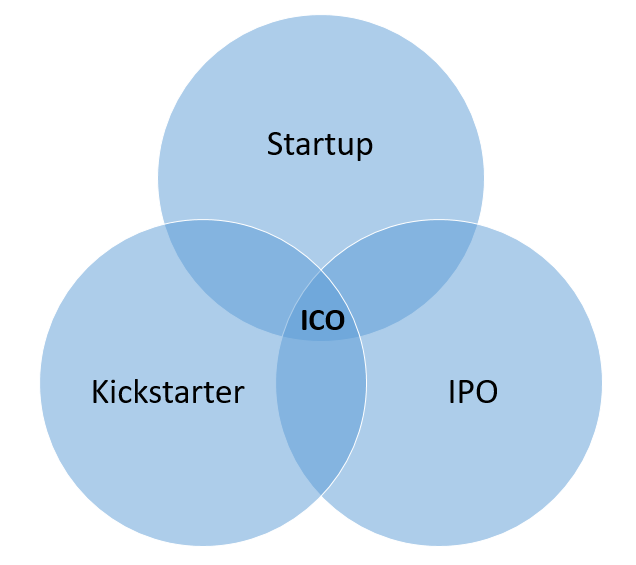 ICOs are like startups: Investing in an ICO is most like investing in a startup, since there is typically no shipping product, just an idea. Investors should look at an ICO in the same way that a venture capitalist looks at a new investment opportunity: will this become a great company? VCs analyze the team, the idea, the market, and many other factors (and so do we).

ICOs are like Kickstarter campaigns: To invest in an ICO is to provide funds for a new company or project to get started. You are paying “up front,” often on nothing more than an idea. Like Kickstarter, the project requires enough momentum (i.e., enough investors) to get off the ground. Unlike Kickstarter, if it fails to launch, you probably won’t get your money back.

ICOs are like a traditional IPO: An ICO typically buys you “tokens,” which may later be traded on token markets, with the value of the token rising and falling depending on investor demand. In that sense, they are like shares of stock. Indeed, this is why many prospectors buy into ICOs, in the hope that they will be able to sell them at a quick profit. Unlike stock, you’re not an owner in the company: no equity, no voting rights, no dividends.

To evaluate the success of an ICO, you need to use progressively finer “screens” to filter out the gold from the gravel. We use three of these filter screens, detailed below. 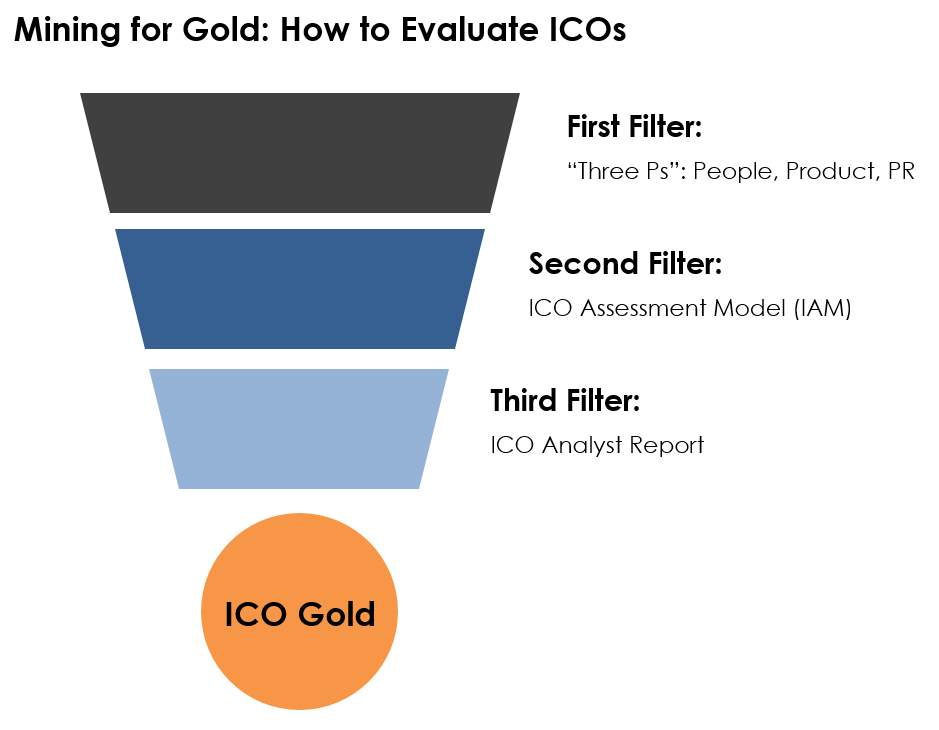 Evaluating ICOs with the Three P’s

Like an initial pan for gold, there are three data points that can give us a “first pass” at the quality of an ICO. We call them the Three P’s: People, Product, and PR.

People. We look at the quality of the people behind the ICO. What is their track record, particularly in the blockchain space? Who are their advisors? What is the size of their network? Do they bring credibility and experience, or are they newbies jumping on the ICO bandwagon?

Consider the difference between investing in a restaurant idea from a seasoned owner of several fast-food franchises, and a restaurant idea dreamed up by a guy who works in accounting. While the accountant can succeed, the experienced restaurant owner has a much better chance.

Product. Do they have a working product, even an MVP? Is the source code publicly available on Github? If there’s no prototype, it’s still just a blue-sky idea. The team that has something – anything – to review is miles ahead of the team that has only an idea and a website.

As an example, one team recently launched an ICO for a new altcoin trading platform. The team consisted of a dozen developers who had built a fully-functioning prototype of the platform. Would you rather invest in that project, or the project based on nothing but a white paper?

PR. We’ve found an excellent early indicator of an ICO’s success is the amount of press the team is able to generate. News stories, community engagement, and social media buzz all play a part. People need to know about the ICO before they’ll consider investing.

We have found a positive correlation between the amount of pre-ICO PR and the total amount raised. This makes logical sense, although it does not mean that heavily-hyped ICOs are a wise investment – it just helps us make the initial “first filter.”

We roll up the Three P’s into our BMJ QuickScore, which you can see on our Upcoming ICOs page.

Like an initial pan for gold, the BMJ QuickScore reveals where to start digging. When we think there might be gold (i.e., a promising ICO), we break out the shovels and go to work.

We take each Initial Coin Offering through our ICO Assessment Model, which is based on the Timmons Model of Entrepreneurship. Developed by Jeffry Timmons, the father of entrepreneurship, this model was created as part of his doctoral thesis at Harvard, before moving on to Babson College where he founded entrepreneurship as an academic discipline.

The Timmons model helps predict whether an entrepreneurial idea will be successful, based on the team, market, and opportunity. We’ve tweaked the Timmons Model to include some blockchain-specific criteria, such as token distribution and decentralization, but the spirit is the same: rate ICOs based on their probability of success.

After our ICO Assessment Model has located a vein of gold, we then do a full analysis of the opportunity.

Our team of analysts and researchers then meet to discuss the opportunity, debating whether we would invest our own money. As our analyst Michael Hooper has written in How to Evaluate an ICO Investment, we:

After engaging in dialogue and debate around these subjects, our team puts together an ICO Analyst Report, our definitive look at an Initial Coin Offering. These reports are available for purchase, usually for less than 1ETH.