A normal, rational person might suggest that it really doesn’t make much of a difference, as it’s really the same amount of pizza. This poor Australian girl, however, will probably never live down the time her “friend” Brad filmed her saying that she’d prefer eight slices, because she couldn’t possibly eat 12 slices of Pizza.

Well, today Jen can finally point out that the eternity of new-wave momentum traders are giving in to the same logic that she did four years ago.

This headline really embodies the level of maturity we’ve been seeing lately in the stock market.

It’s the same thing with Apple stock as well. They announced a split, and for some reason, people are treating this as a bullish event when it’s really not.

Yes, stock splits are usually seen as bullish events, simply because they usually happen during a bull market, but it certainly is no cause to rally in and of itself, as the event does not add any value to the company.

For those who aren’t familiar with the dynamic of a split, it basically means that you double the amount of shares of the company, but reduce the share price by half.

So if the company has 1,000 shares that are worth $100 each, then each person who was holding one share before the split will have two shares after. However, the price per share will drop to $50. No value is added, and the total market capitalization of the company remains unchanged.

Since Tesla is doing a five-for-one split, it means that each share will now be worth roughly $300 instead of $1,500, but the actual amount of the company that each share represents will be 20% of what it was before.

Tesla shares are up about 12% today. Not that they haven’t rallied this hard on less important news, but seeing posts on social media to the tune that this will increase liquidity or allow more money to go into Tesla is just silly.

Almost all retail-facing brokers already offer fractional shares, and their clients have been happily buying chunks of Tesla for less than $300 already.

It’s a simple exercise in the dark arts of behavioral economics, which may seem like black magic to some, but really shows that the market is currently full of people with the same level of intelligence as Jen the Pizza girl.

A price of $300 per share sounds a lot cheaper thank $1,500 per share. Since valuations clearly no longer matter, this is clearly a brilliant move by Apple and Tesla.

Data released this morning shows that inflation is coming to the United States much quicker than anticipated.

As we discussed a few times in these updates, the lockdown period of the global pandemic created a massive deflationary shock, as people were not going out to spend money. Less spending put downward pressure on prices, and therefore this caused deflation. 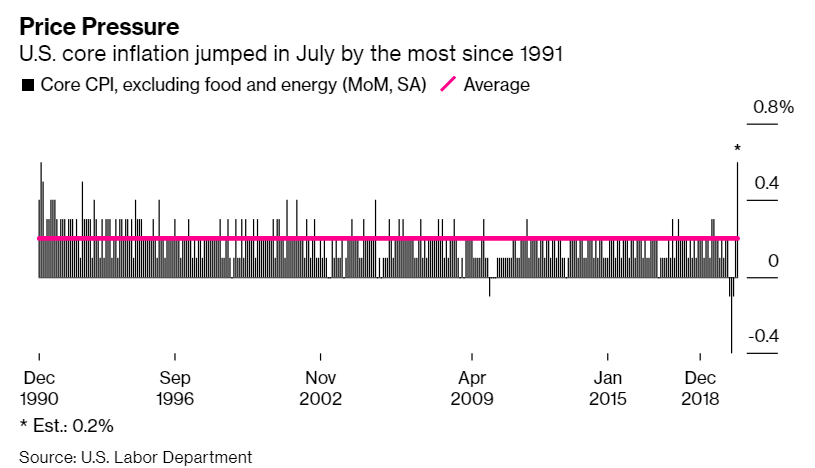 It seems that since people are starting to go out and spend again, prices are going up. Weighing in today, most economists don’t seem entirely too concerned about this though.

The number one reason for calm seems to be that wholesale food prices have yet to rise. Indeed, with all the pandemonium going on lately, we’re seeing a very lopsided market in which different goods are moving at different speeds across different supply chains.

So, at any rate, this one specific data point may not be much cause for concern. The state of the economy and overall level of volatility in all data points except the stock market probably should be, though.

Any fear that might have been in the market yesterday seems to have completely faded away by now, as investors have gone right back into their favorite narrative-specific positions. FAANG stocks are flying along with the entire stock market.

The cryptocurrency markets have found some semblance of support to bounce off of, and are showing all green.

The U.S. junk bond market has been on fire lately, setting a new record for the month of August by generating more than $30 billion in trading volume in only seven business days. The amount of big money chasing small money at high-risk is simply breathtaking. The “this is fine” dog meme comes to mind here.

Gold, which just came off its worst plunge since 2013, has rebounded sharply. For those who’ve been waiting on the sidelines for an entry point, this could be it. Mati Greenspan Click to tweet

Joe Biden’s pick for vice president is certainly taking up a lot of chatter, but what’s critically more important at this point are the talks for fiscal stimulus which now seem completely dead in the water, and the markets clearly giving politicians a pass.