It’s hard fork day in crypto land, and everyone seems excited for the upgrades that have just been implemented on Ethereum’s blockchain.

We’ll spare you the technical details in this report, but the above article from MacKenzie Sigalos, a CNBC reporter, does a really great job of setting expectations for the average user.

In short, the fees will not necessarily be reduced, but they are likely to stabilize.

What’s more interesting, however, is that a portion of the fees that used to go to miners will now be burned instead.

It’s not great for miners, but it is really good for hodlers, as it reduces supply.

No, it doesn’t make ether a deflationary asset, since the issuance will still be higher than the amount burned.

However, it does make the digital currency more disinflationary than it was yesterday.

As I had the honor of explaining on Australian Business TV last night, or early this morning Aussie time, it has been ether, and not bitcoin, leading the recent crypto rally these last few days.

As you all know by now, the Federal Reserve has been printing copious amounts of money lately.

On a monthly basis, they’re creating approximately $120 billion out of thin air.

This is despite the fact that the economy is already well on the road to recovery, stock markets are at all-time highs, and that their actions are causing unnerving levels of inflation.

In an exclusive interview with Thompson Reuters published yesterday, Federal Reserve Bank of Dallas President Robert Kaplan, a member of the Federal Open Market Committee, questioned the efficacy of the monthly injections and publicly voiced his doubts that they’re doing much to create jobs.

Therefore, he humbly proposed that the Fed should begin gradually lowering the level of stimulus, starting with a reduction of $15 billion per month and possibly reaching zero within about eight months “plus or minus.”

Here we can see the Fed’s balance sheet, which has just surpassed $8 trillion.

Some quick arithmetic shows that even if they manage to decrease their current money printing by $15 billion each month for the next eight months, a roadmap I don’t believe they’ll be able to uphold, the blue line will still rise by more than half a trillion dollars by April. 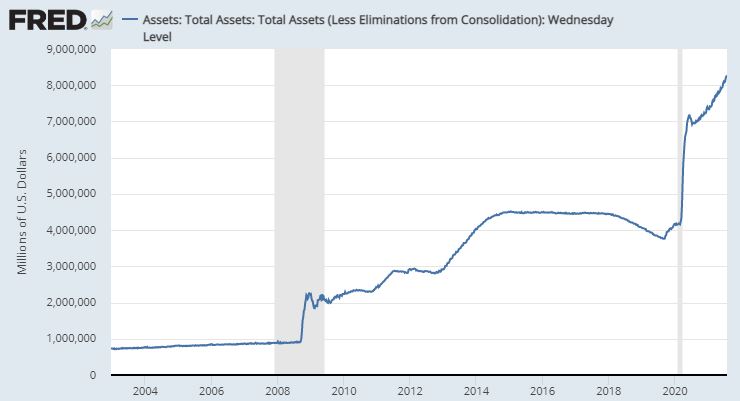 This is very similar to when a person addicted to heroin tells you he’s cutting back and plans on being completely clean within the next year…. right.