You should probably never take an IOU from someone you don’t know, and ghosts, even friendly ones, are not necessarily the best investments. Mati Greenspan Click to tweet

I believe it was Pablo Picasso who said “Learn the rules like a pro, so you can break them like an artist.”

The other day, one of our analysts told me about a project called Casper, which he is affiliated with. I had certainly heard of it before, as it is the protocol that’s supposed to bring Ethereum into a Proof-of-Stake model.

Don’t ask me more than that right now, because I don’t know, but here’s an article from Investopedia nearly two years ago.

What I didn’t know is that they’re coming out with a token when their mainnet goes live tomorrow.

To make a long story short, buying the token itself before the launch of the mainnet was impossible, except with a little known exchange called BitZ that actually had what they called a future for the token under the ticker CSPR.

Clearly, this isn’t a futures contract, because the exchange is basically offering an IOU of the token. Whether they’re backing it up with commitments from founders with access to the tokens, or just taking a risk trading against their clients, remains unclear.

What is clear is that for the last few weeks, the volume for this pair was silly, like under $2 million a day.

It was such that with even really small orders I was able to see an immediate change in the price. So, naturally I did what any good investor might do in this situation, and I bid it up from $2 to $8.

After that, as tends to happen in crypto, the market went a bit nuts. 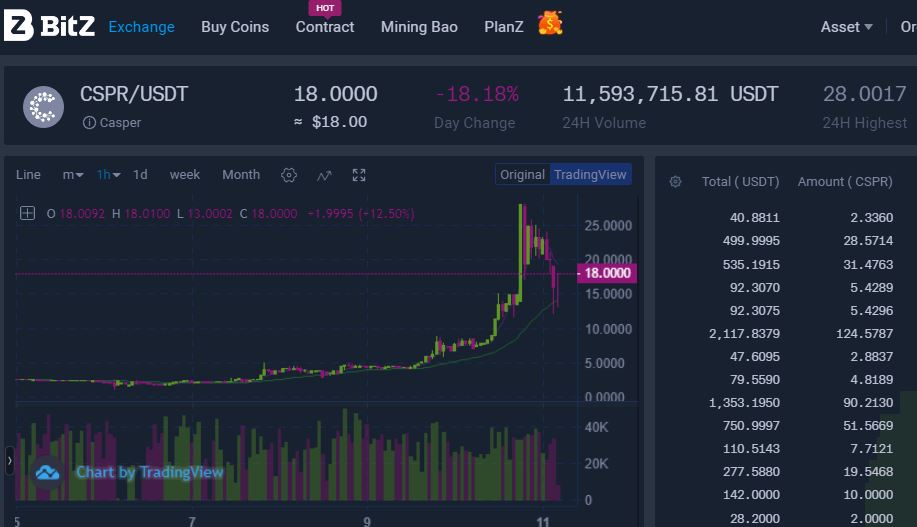 The fear of storing funds on an unknown exchange has been somewhat assuaged this morning, as I was able to safely withdraw back my initial investment.

I did this after learning from the team that the BitZ IOUs are extremely unreliable, not only due to the enormous counterparty risk, but with volumes so low, it’s difficult to know if the price there actually reflects reality.

According to people on the Casper Telegram group, that I was just kicked out of, one member said that they would “be thankful if the market priced it at $1.”

Now, this doesn’t make much sense to me for several reasons, and it’s baffling to see people place such a low value on their hard work.

As a project that’s been in the news a lot for what they’re building, my feeling is that there will be a high demand for their tokens. On the other side, as it appears, most of the founders and builders who are due tokens have some kind of lockup in place.

Even though the final cap for the tokens is 10 billion, only 400 million will be immediately available for trading in the first 30 days.

That is not a lot of coins for a high-profile token that is set to be listed simultaneously at several large venues including Huobi, Gate.io, and CoinList.

Heck, due to the high demand, I would not be surprised to see a Binance listing by the end of the week, though it’s difficult to see where they might get the initial liquidity.

In any case, I hope you understand that I’m just sharing my experience here, and this should in no way be seen as investment advice.

The risk factor is off the charts, so please never invest more than you can reasonably afford to lose. In any case, it’ll be interesting to watch over the next few days.