No thanks to broad inaction on climate change we’re now just 100 seconds from midnight.

For those of you who are unfamiliar, the Doomsday Clock is a metaphorical barometer maintained by the Bulletin of Atomic Scientists, which currently boasts 13 Nobel laureates on its prestigious board, and it’s meant to give us a sense of how neigh they feel the end actually is.

Yesterday, they set the clock forward by half a minute and it now is now giving its most dire reading since it began ticking in 1947. Nearly 40 years ago, when the clock first read two minutes to midnight it inspired this awesome song by Iron Maiden, a song that I listen to too often to this day.

As our world leaders conclude their annual shindig in Davos with little to show in the way of actionable commitment towards their stated goals, the rest of us can only hope that we’ll still be singing songs about Doomsday in another 40 years. That and make consumer and investment choices that shape a better future.

I remain convinced that grassroots projects for renewable energy will be one of the best investments people can make in the 2020s.

Satoshi Nakamoto in his superior wisdom did prophesize about what might happen in the event that someone wanted to make another version of bitcoin, and his advice was pretty stern…

It seems today that we have more forks than we really know what to do with. Bitcoin Gold, Bitcoin Diamond, and Bitcoin Unlimited are all pretty risk but the original fork known as Bitcoin Cash is now starting to show some serious cracks. On Wednesday, the following blog post received reactions that ranged from extreme skepticism to outright ridicule…

In short, the backers of this new proposal including Roger Ver and Jihan Wu, who are some of the most vocal Bitcoin Cash supporters, are saying that from now on a total of 12.5% of all block rewards must be diverted away from the miner into a special fund that will oversee the future development of Bitcoin Cash.

To be clear, it is important for any cryptos long term survival that there are resources going towards the development of the network. For example, Ethereum Classic (a fork of Ethereum) has recently secured funding from Greyscale in order to develop their network for the next two years.

The above proposal for BCH actually looks a lot like the way Z-cash (another bitcoin fork that focuses on privacy) is setup. More like a company and less like an open-source network. The apparent problem however, is the way they’re trying to force this through and threatening that any miners who don’t go along will be abandoned. Meaning, if a miner mines a block that doesn’t include the new tithe, that block will be rejected by the network.

At current estimates, the current backers of the new ordinance only have about 35% of BCH’s total hashpower (read: control of the network). So it does seem like it will not only be difficult to enforce but if they do end up making good on their threat they’ll most likely end up ripping the network to shreds. 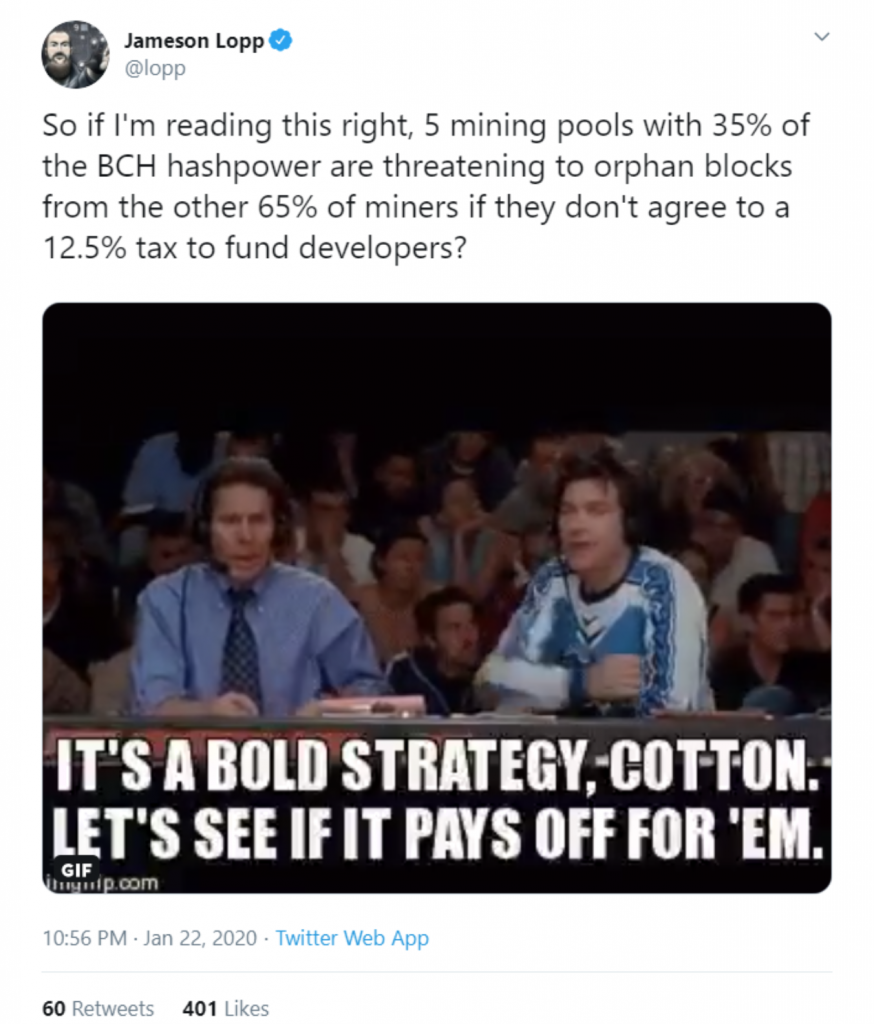 …and now we understand the dangers of forks. As far as bitcoin is concerned, development actually seems to be going forward as smoothly. Just as I’m writing to you I came across the following headline, which seems extremely encouraging indeed. In short, it seems like BTC might be close to seeing one of it’s largest upgrades the assets short history. 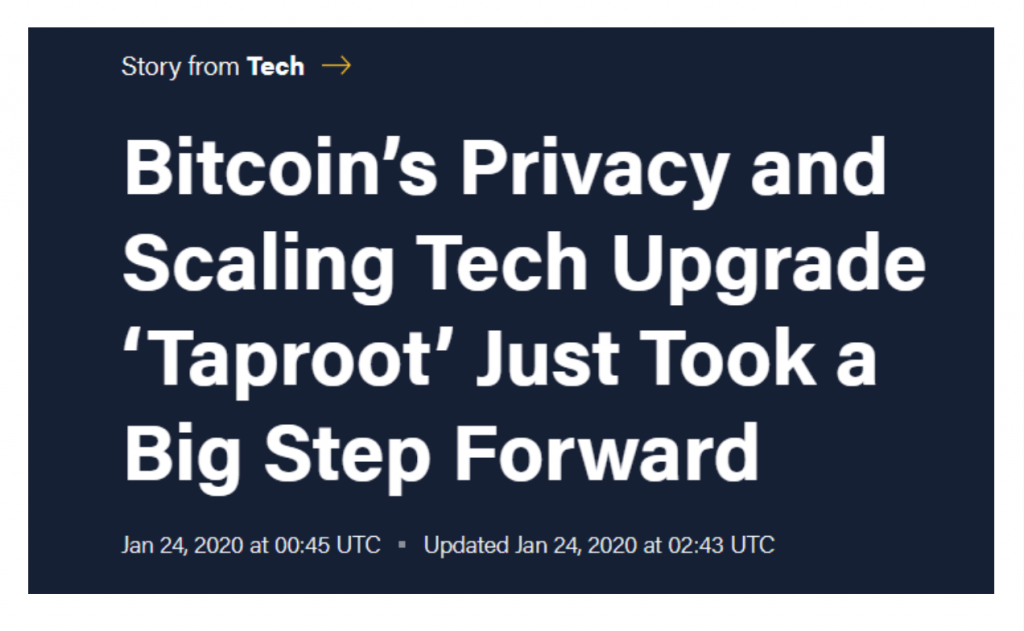 Of course, we await to hear feedback on this upgrade from other coders in the community. If there are no major objections, which there have not been so far, we go forward. If not, well, then we start debating and slinging mud on social media for the next few months until a compromise is reached.

For anyone wondering why we’re now getting a pullback in crypto prices over the last two day, just know that it’s not entirely unexpected. In an interview last Thursday, I discussed the technical setup with AIBC’s Jessica Walker. You can catch the recording at this link (timestamp: 1:30).

In short, after a hard rally we’ve come up on some serious resistance at the 200 day-moving average (blue line). A line that has played a significant role in bitcoin’s graph over the last few years. In addition, the fact that it’s now near the top of a wide channel that we’ve been tracking for the last few months means that many will likely be de-risking. 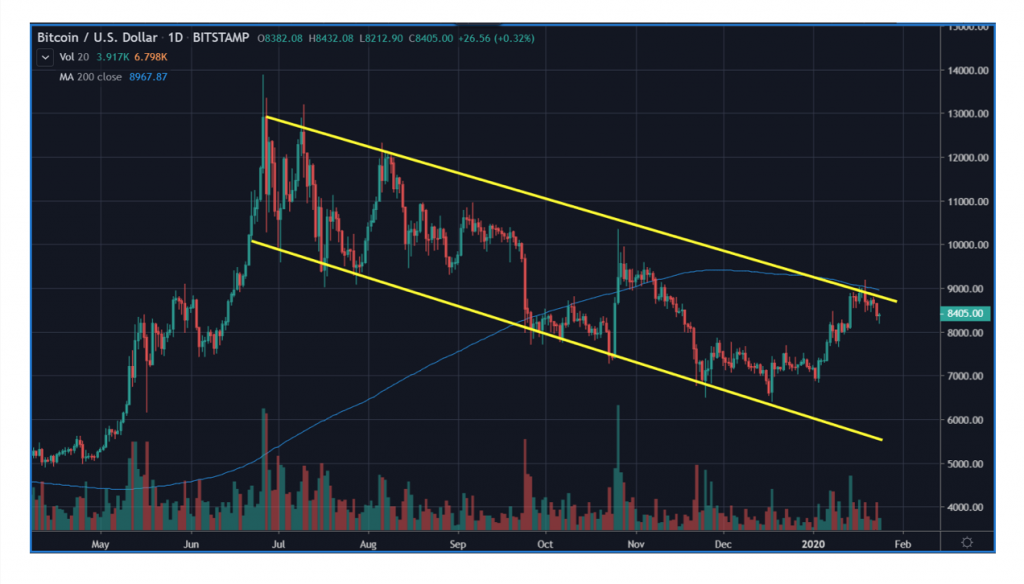 Now, as we mentioned in the video, it was expected that we would likely see some sort of pullback before making another attempt to cross this double barrier.

So the question becomes: at what point would we consider this a minor pullback for the sake of gathering momentum and at what point will people see it as a reversal that could take us back to the bottom of the channel?

My feeling is that if we’re able to hold above $7,800, it will be a very good sign. This morning, we actually saw an interesting bounce of $8,200 so if that holds firm, it’s quite likely that we’ll end up seeing that big breakout after all.