It’s day four of quarantine and I now know the names of all my daughter’s LOL Dolls and I know how to make four different kinds of slime. Information is so important in times like these.

That’s why, our friends at media shower, the sponsors of this QE Newsletter, have put together an amazing initiative called CoCo to help keep track of all the criticle info and more importantly, to help people communicate it.

As you can see, this is still very much a work in progress but we do hope that with your help, CoCo can help anyone with an audience, which is all of us, to communicate critical information not only about the virus but about our new way of life on the planet.

There’s a meme going around that I thought a bit funny but not entirely accurate.

“Our grandparents were called on to fight on foreign beaches and die in far away fields. We’re being called on to sit on the couch.”

It’s not just about sitting on the couch. We all have ways to contribute. So, come join in the effort at: https://coco.mediashower.com/

One thing adding to the woes of the financial markets, as if they needed any more trouble at this point, is the ongoing price war between Russia and the Kingdom of Saudi Arabia. This seems no longer a game of prisoner’s dilemma and more a game of spite.

After Putin refused to go along with KSA’s production cuts, as we discussed in this episode, the King has become very angry and rather than cutting production, he’s increased it… by 43%.

Through the last few years, their strategy has been reduce production in order to increase the price. Now we have analysts calling for $10 a barrel or worse, negative. Yup, the price of storing crude oil might at some point soon surpass the value of the oil being stored.

Of course, this is terrible news for financial markets and is weighing heavily on the stock markets but it’s certainly not the only reason we’ve hit limit down early in the trading day. The fact is, that given the current and upcoming quarantines around the world many businesses will be closing and for so many, it might not be temporary.

Let’s hope that Trump’s fiscal bill comes through soon and that it has the desired affect.

In the face of an 8% plunge in the stock markets, Bitcoin and the alts are holding up quite well today. Mati Greenspan Click to tweet

Many of the top 10 coins are down just about 1% for the day.

Dash is actually zooming today. It’s been one of the best performing cryptos lately and is even up year to date. This is largely due to it’s increased usage in South America and other emerging markets. Today’s move does seem to be mostly technical and it’s nice to see a dash of green on the board. It seems at least someone is buying the dip already. 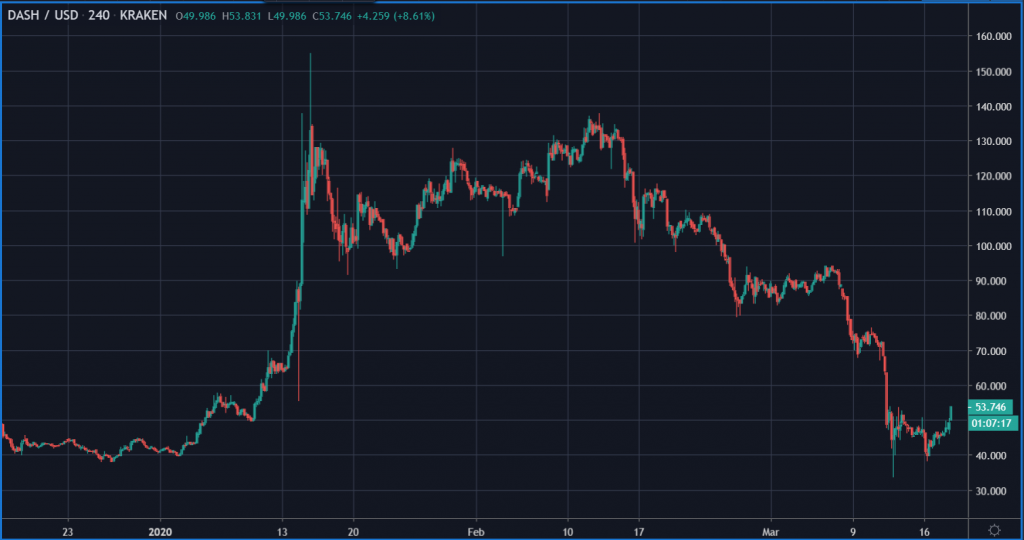 That’s all for today but definitely keep in touch on social media, and keep sharing these newsletters.