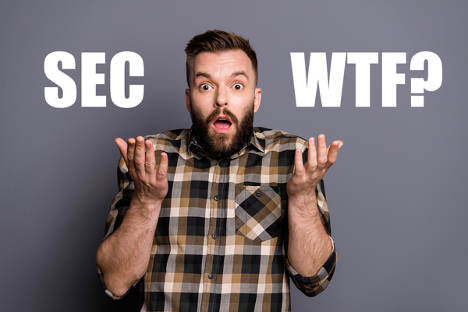 The SEC is supposed to protect investors. What happened?

This week, Coinbase announced that the SEC has threatened to sue them if they launch their new Lend product, which allows investors to earn up to 4% interest on their crypto holdings. [Read the blog post here.]

The crazy part? According to Coinbase, the SEC won’t tell them what’s illegal about Lend.

On the surface, Lend seems pretty innocuous. There are dozens of DeFi projects that already let investors earn interest on their crypto holdings. Of course, none of these are run by a large, publicly-traded company like Coinbase.

(Full disclosure: I am an investor in Coinbase, because I believe it’s a great company that has the potential to become the biggest blockchain bank. Also, I think Lend is good for investors, as I’ll explain below.)

We’ve come to a reckoning. The SEC is finally forced to make some decisions about crypto, but this is not a decision. And certainly not the SEC’s job, which is to protect investors.

Fortunately, there’s something you can do.

Today I’ll explain briefly what the SEC was designed to do (protect investors), what it’s doing (narrowly interpreting ancient laws), and what you can do (share our new #SECWTF campaign).

The SEC Mission: To Protect Investors

For the benefit of our international readers, the U.S. Securities and Exchange Commission (SEC) was created after the 1929 Wall Street Crash, in which hundreds of thousands of ordinary American investors lost money, many of them borrowing heavily to buy stocks.

One could say the SEC is the hidden power that has been lurking behind blockchain all along. The enormous ICO boom of 2018 quickly skidded to a halt because the SEC said ICOs were unregistered securities. (In plain English, think of a “security” like a company stock.)

To simplify the fundamental question: are blockchain investments like a traditional stock? If so, the SEC should regulate them under federal securities laws (i.e., treat them just like the stock of a public company).

It’s a complicated question, to be sure. In some ways, they’re like a stock (investors sure think of them like company stocks), but in other ways they’re different (for example, there’s often no company).

In the case of ICOs, these were companies, raising money to launch their blockchain businesses through issuing new tokens. That’s pretty much like raising money through an Initial Public Offering (it was no coincidence that ICO rhymes with IPO). Because ICOs weren’t registered with the SEC like an IPO, the SEC ruled them illegal.

But what’s illegal about allowing people to earn interest on their crypto?

Digital assets like bitcoin and cryptocurrencies are legal for investors to own. And there are many ways for “Main Street investors” like you and me to make money with them; that’s what our website and newsletter is all about.

Traditional banks are paying investors less than 1% interest on savings accounts. Meanwhile the CPI index (read: the cost of stuff) has increased 5% over the last year. The takeaway for investors? Storing your money in a traditional savings account means you’re losing money.

(True, Coinbase is offering 4% interest for its Lend product, which still means you’re losing money at 5% inflation – but it’s better than the alternative.)

Why wouldn’t the SEC applaud this way to help ordinary investors put their money into a better type of savings account? Coinbase stores the digital assets, so if anything happens, Coinbase is on the hook. If the market suddenly crashes, Coinbase is responsible.

Why on Earth would the SEC threaten to sue?

Speaking as one of the investors that the SEC is charged to protect, it seems the spirit of the agency has gotten lost in the minutiae of legal interpretation.

Much of the SEC’s work in blockchain has been looking at ancient laws (the most famous of these, SEC vs. Howey, is colorfully explained here). Do blockchain investments like bitcoin and cryptocurrency fall under these laws?

It’s like the SEC is trying to fit a dodecahedronal peg into a round hole. (Hint: it’ll fit if the hole is big enough.) 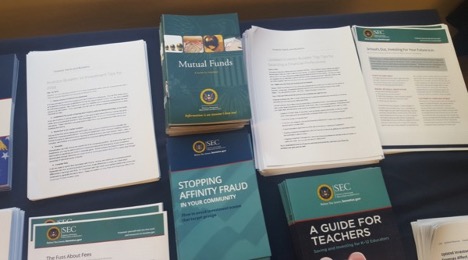 A few years ago, I went to a talk by former SEC commissioner Jay Clayton, and I was impressed that his staff had set up a little table at the back of the room with a bunch of investor education pamphlets. We all talk about better investor education, but the SEC was actually doing it.

But it’s not investor education to threaten to sue Coinbase, for launching a product that will help investors.

There are many ways the SEC could be more transparent in its thinking.

It could issue a release.

Billlionaire Mark Cuban urged Coinbase to get aggressive with the SEC. But I have a different idea. 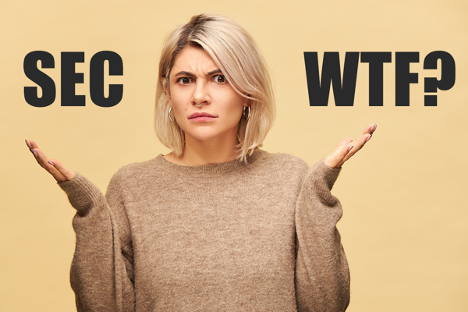 We’ve been watching this for years. The SEC can’t make a decision.

And so investors are left in a holding pattern, never quite knowing if our blockchain investments are safe – not from crypto fraudsters (there are plenty of those), but from the SEC itself.

Here I will agree with Mark Cuban: what the U.S. needs is “exemptions, like the internet got in the 90s.” In other words, if new blockchain investments don’t fit under the old laws (and they don’t), then make new laws.

By giving new digital assets a Safe Harbor, we can allow the blockchain industry to flourish, helping the U.S. to take the lead in the future of finance, just as we did with the Internet in the 1990s.

There are two things you can do:

1) American readers: write your Congressperson. Click this link to find them, then copy and paste something like this:

The U.S. needs a better way of treating digital assets like bitcoin and cryptocurrencies. These are currently regulated under the Securities Act of 1933, and the SEC seems confused about how to respond.

I urge you to consider new legislation that would put bitcoin and cryptocurrencies under a “Safe Harbor,” much like the exemptions we made for the Internet under the Telecommunications Act of 1996.

Like the Internet, digital investments like bitcoin and cryptocurrencies are fundamentally different from investments of yesteryear. By protecting them under new legislation, we can allow the U.S. to take the lead in the future of finance — just as we did with the Internet in the 1990s.

The U.S. needs a commission that works for blockchain investors, not against them. Better dialogue, better decisions. #SECWTF

With enough pressure, perhaps the SEC will finally start to open up and share its thinking with us, the investors it is charged to protect. And then, perhaps, we will learn WTF.