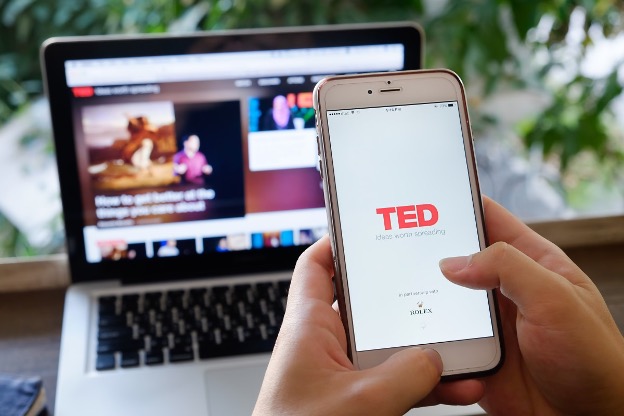 Preparing for the talk was an interesting experience. You meet with a speech coach. You practice in front of test audiences. You hone, refine, and polish that baby until it’s down to a tight twelve minutes. It’s like a standup comedy set for intellectuals.

While doing this prep work, I reread the original Satoshi Nakamoto white paper that outlined the vision for bitcoin.

It’s a remarkable document. In just eight pages, they outline a vision for the future of money, complete with mathematical proof. I imagine history teachers will eventually teach this paper in their classes: the document that ignited the crypto revolution.

However, I think Satoshi got one thing wrong.

Satoshi was trying to solve the central problem of e-commerce, where we need a trusted third party to process transactions. For example, we buy something online, we use our Visa card. We pay our friend for dinner, we use Venmo. Centralized third parties.

Satoshi’s argument was that “centralized” companies drive up the cost of transactions, because they have to constantly monitor fraud. For example, some Visa cards will be stolen, and Visa will have to reimburse the cardholder. This “member benefit” requires fraud teams, which makes every Visa transaction a bit more expensive.

Satoshi simply wanted an alternative to centralized third parties: a decentralized, peer-to-peer network. But this idea of DECENTRALIZATION! has grown into a fetish for the crypto community.

To understand this, we simply need to look to nature.

We can look to nature to understand the way the world is wired. When we observe the natural laws followed by plants and animals, we can apply those laws to more exotic human creations (like crypto investing).

In nature, we see both centralization and decentralization happening in a fluid cycle. Bees look pretty decentralized, but they report to a queen. Water is everywhere, but it accumulates in lakes and oceans. Iron filings do their own thing, until a magnet draws them together.

If we look more closely, we see that nature follows a rhythm of centralization and decentralization: the bees report back to the queen, then go out to gather pollen. Water evaporates from the ocean, only to condense into clouds, then to disperse and find its way back to the ocean again. Centralized, then decentralized.

The real innovation was giving power to both the national and the state governments. Although this caused plenty of friction — and it still does — they keep each other in balance, and maybe make each other better.

Similarly, U.S. banks were decentralized, until everyone saw that was a terrible idea, because there was no financial stability. The creation of a Central Bank gave widespread trust to the financial system, while still protecting the rights of independent local banks. Once again, centralization and decentralization worked together.

Over time, this financial system once again became too centralized, with U.S. banks becoming “too big to fail” and requiring government bailouts in 2008. That’s when Satoshi Nakamoto wrote that famous white paper, sparking the Decentralized Finance movement today. 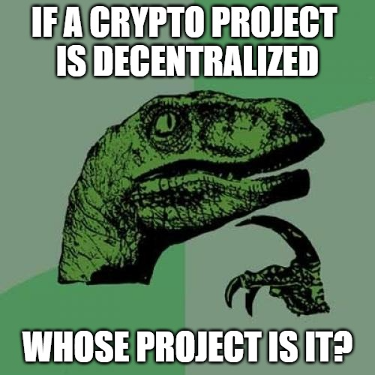 Decentralized In Name Only (DINO)

In nature, complete decentralization would be like colored ink squirted into a glass of water: it permeates the water, but loses all identity of its own. It would be like the bees spreading to the corners of the Earth, but never gathering to make honey.

The spirit of decentralization is alive in bitcoin: there’s no bitcoin company, no bitcoin marketing team, no bitcoin Central Bank. The flip side is that bitcoin has a marketing problem (the world still doesn’t completely trust it), it’s not useful as money (the price is too unstable), and it’s ridiculously hard to get people to agree on upgrades.

Is it possible that decentralization can be taken too far? Bitcoin shows us the answer is yes.

There’s another reason that crypto projects seek decentralization: they’re harder to prosecute. If no one is in charge, then who can the SEC sue, if things go wrong?

This has led to a new phenomenon called “Decentralized In Name Only,” or DINO. Crypto projects will claim to be decentralized by issuing “governance tokens,” which are like shareholder votes. Because the tokenholders own the project, it’s decentralized!

There’s a reason we don’t have every citizen vote on every bill that goes before Congress: “direct democracy” doesn’t scale. It’s mind-numbingly boring. Instead, we hire elected representatives who we trust will study the issues and make the best vote on behalf of the citizens. (Again: both centralized and decentralized.)

This is a lesson that we can easily learn from human history, but crypto projects are learning it the hard way, through “governance proposals” where the votes are dominated by the people who hold the most governance tokens. These fully-decentralized systems simply create a new centralized threat.

Nature disrupts centralized organisms by breaking them down into smaller decentralized parts: when a system draws too much power, it explodes. When a city gets too large, people will flee for the suburbs. When a government gets too powerful, it collapses under its own weight.

Even our own bodies will one day break down and be food for worms. The centralized will once again be decentralized, and life will begin anew.

I love centralized systems. I think great governments provide education, healthcare, and infrastructure at a level we could never do ourselves. I think great companies provide products and services that make life better and easier.

But I also see the dangers when these governments and companies grow too powerful. Amazon is an incredible product: I think of something I need, and it shows up on my doorstep. But I also look at Main Street in every town I drive through, and see all the FOR LEASE signs on the shops that Amazon has displaced.

And I disagree with Satoshi, because Visa does provide a valuable service in offering to refund fraudulent purchases on our cards. It gives us the confidence to order stuff online without the fear we’re going to be ripped off. That is worth paying a little extra, because that service costs money.

But Visa’s business model can screw over smaller retailers, who have to bear the brunt of Visa’s service fees, and are often the victim of the “chargeback.” The balance between centralization and decentralization is often tricky to get right.

Enough with the philosophy. As crypto investors, we need to put this into practice. How does this inform what we buy and HODL?

First, understand the tradeoff that comes with decentralization: it’s harder to coordinate.

This means that the pace of innovation moves slowly with a decentralized project like bitcoin, as opposed to the furious innovation with centralized teams building DeFi and NFT projects.

This tradeoff will have a huge long-term effect on your crypto investments: completely decentralized projects can be overtaken by smaller, nimbler teams that can “move fast and break things.” This gives centralized teams a huge competitive advantage.

On the other hand, be wary of investing in crypto projects that are completely centralized: it’s too easy for the team to make bad decisions with no accountability, especially if the team is young and inexperienced (and unregulated).

Once again, the sweet spot is somewhere in the middle.

When doing your research on crypto investments, analyze how decentralized they really are. Don’t be fooled by what my colleague Dan Roberts calls “decentralization theater”: do the research.

If a project converts to governance tokens, find out how many people are actually using these tokens, what changes they’re proposing, and who those proposals will benefit. If a few whales are hoarding all the governance tokens, and all the proposals benefit the whales, then that’s just centralization all over again (of the worst kind).

When looking for this blend of centralization and decentralization, Ethereum is probably a good model: you have a centralized Ethereum Foundation, a central visionary in Vitalik Buterin … but the project itself is highly decentralized and community-driven, as we can see from events like ETHDenver.

Binance is another good example: it’s a centralized exchange that has launched its own set of decentralized services. From a business standpoint, this is crazy and counterintuitive: why would you disrupt your own CeFi business with DeFi services? The answer is they understand the balance of centralization and decentralization.

The DINOs will likely die off. Centralized crypto projects pretending they’re decentralized by issuing “governance tokens” is a fate worse than death: it’s death by a thousand cuts, as every proposal must be endlessly debated and discussed. It’s like watching CSPAN, but with code.

Instead, the projects that are likely to thrive are the ones that find that tricky balance between centralization and decentralization: allowing tokenholders to have a say, but with a central team empowered to make day-to-day decisions and to do the work.

Even Satoshi admitted in the bitcoin white paper that centralized e-commerce systems “work well enough for most transactions.” Satoshi just wanted a better solution for the other stuff.

As crypto investors, ask, “Who controls the power?” If the answer is either “a tiny group” (centralized) or “everyone” (decentralized), think twice before investing. Look for a mix of both managers and the crowd, so each can keep the other in check.

Satoshi Nakamoto is the ultimate centralized figure who launched a decentralized movement. And that says it all.