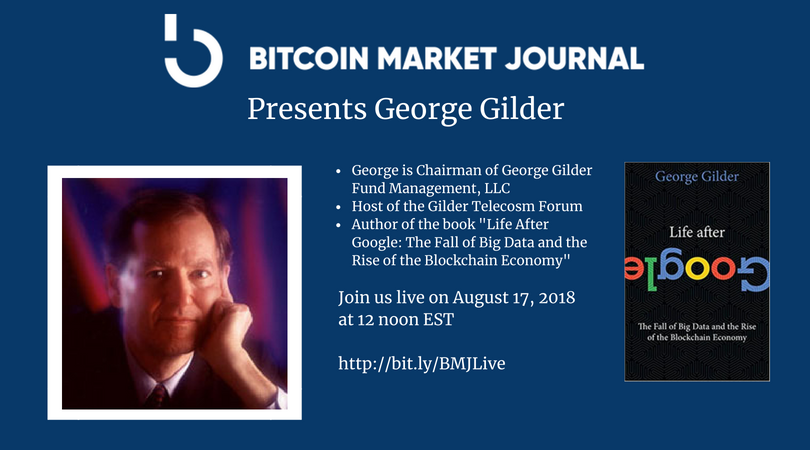 Everyone’s aflutter at the Bitcoin Market Journal this week, as our staff eagerly awaits the arrival of our honored BMJLive guest, George Gilder, on Friday, August 17th.

Mr. Gilder, a world-renowned technology prophet and one of the most influential writers in the last half century on economic growth and technology’s role in it, will be joining Sir John Hargrave, publisher of Bitcoin Market Journal, on Friday at noon EST for a jam-packed hour of discussion on blockchain technology and its present and future impact on modern life.

The Futurist with a Notable Past

A best-selling author and prolific writer, Gilder has made headlines for decades with his uncanny ability to predict future economic and technology trends and his laser-sharp insights on the impact those trends will have on the wider world.

Mr. Gilder pioneered the formulation of supply-side economics when he served as Chairman of the Lehrman Institute’s Economic Roundtable, as Program Director for the Manhattan Institute, and as a frequent contributor to A.B. Laffer’s economic reports and the editorial page of The Wall Street Journal.

Mr. Gilder’s latest foray into authorship is his newly released book entitled “Life After Google: The Fall of Big Data and the Rise of the Blockchain Economy.” Currently Amazon’s number one best-seller in the category of Money and Monetary Policy, the book offers Mr. Gilder’s insights on what to expect as the post-Google age dawns and blockchain becomes an economic force impossible to ignore.

Describing the book, Ralph Benko, the senior counselor to the Chamber of Digital Commerce, the world’s largest trade association which represents the blockchain industry, notes:

“Google and social media have been in the headlines. So has Bitcoin. Tech guru and conservative economist George Gilder now brings the two together in a fascinating and pertinent way.”

Peter Thiel, co-founder of PayPal and Palantir Technologies, observes in a blurb for Life After Google:

“Google’s algorithms assume the world’s future is nothing more than the next moment in a random process. George Gilder shows how deep this assumption goes, what motivates people to make it, and why it’s wrong: the future depends on human action.”

Hear What Gilder Has to Say about Blockchain and the Future This Friday!

To learn more about Life After Google and Mr. Gilder’s insights on blockchain and its future, please join us Friday, August 17, at noon EST for our latest BMJLive event!