In times of deep crisis such as this it’s important to stay true to who we are and that seems to get more and more difficult the deeper we get.

Last night, I engaged in an interesting discussion on social media when Bruce Fenton posed the question “Are mandated lockdowns right or wrong?”

This is something that another bitcoin though leader, Jimmy Song, is on record as being staunchly against and the libertarian in me tends to agree. 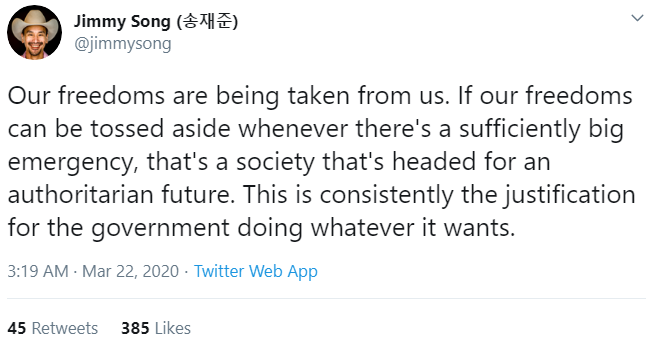 Jimmy’s point here is simply that a pattern has arisen throughout history and some of the most notable authoritarian governments have started out by stripping freedoms often temporarily at first and for a good reason but then the changes gradually become permanent.

However, it does seem like Song is in the minority here. Following Bruce’s live stream last night, I decided to poll the audience with striking results. 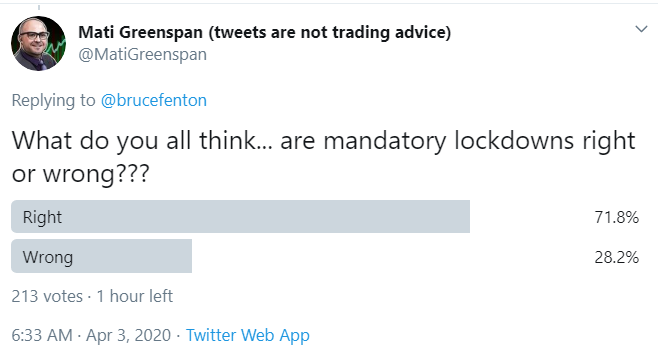 So it seems that most people feel the propensity to save lives overpowers the need to maintain personal freedoms.

Very likely, tracking the disease by use of mobile phones will become quite commonplace sometime soon.

As traders, we’re constantly faced with these type of dilemmas. Is it OK to profit on the downside of the market while so many people are losing their jobs? Normally, I wouldn’t be one to go long on crude oil for idealistic reasons, yet it’s been one of my best positions over the course of the week.

Sure, I could probably justify that by saying that it’s extremely low right now and that is dangerous for a lot of people, but then I’d have a lot of trouble explaining why I was short last month. Of course, my insignificant struggles are nothing compared to those that some medical workers and large business owners are facing at the moment.

Circumstances are very difficult at the moment for many people and I hope that we’re all making the right decisions.

As we’ve stated many times already, if you want to know what the markets are going to do, you need to watch the virus.

Only once we get a better understanding of how long the lockdowns will last and what life might look like afterward, will we really get some trends that are investible for the long term.

One bit of good data can be seen from Italy and though I’m not a doctor, the graph does seem to be indicating that they’re finally over the hump as the number of new confirmed cases has been coming down quite steadily for the last two weeks. 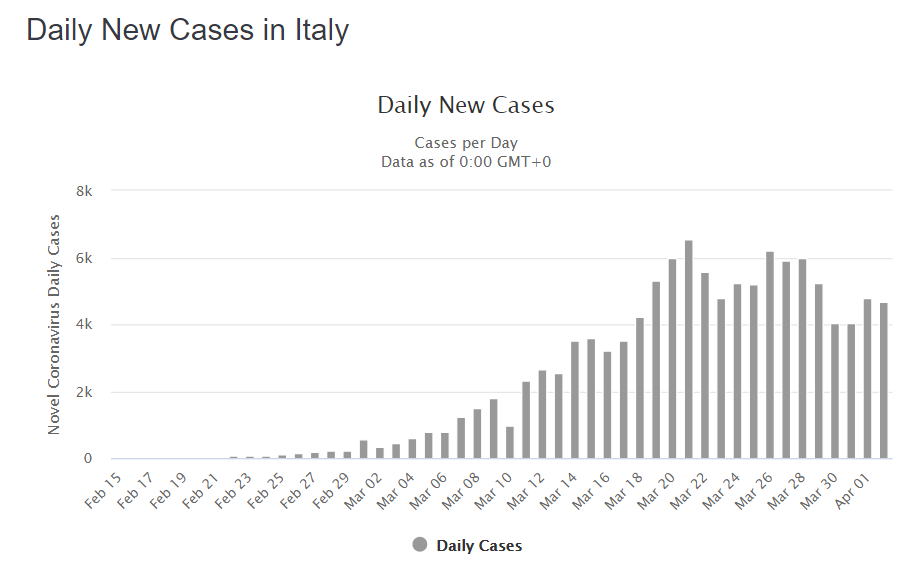 It seems the mandated police-enforced lockdowns have indeed been helping save lives. Unfortunately, the graph from Spain doesn’t look quite as nice but still does seem like it could possibly be forming a top. Spain has now overtaken Italy to be the country with the second most confirmed cases, behind the U.S. 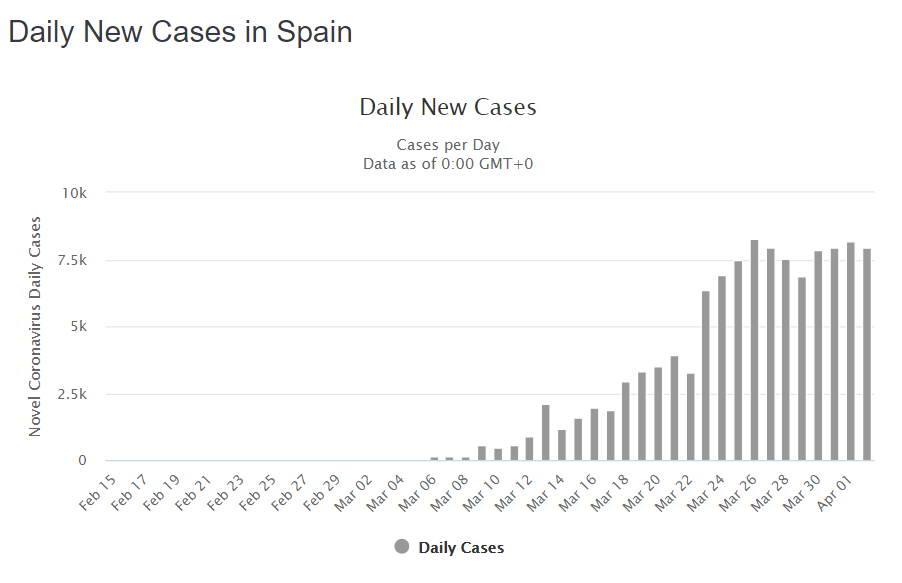 Of course, neither country can really let their guard down at this point. As we’ve seen in Asia, once the lockdowns start to ease the chances of a relapse skyrockets.

So this problem will likely only be solved with the invention of a very efficient treatment or a widespread vaccine and that doesn’t seem likely to happen very quickly. Still, it’s good to know that the testing and quarantines are doing the job.

The data has come out and it’s not pretty but many analysts are calling it a non-event.

The expectation provided by analysts who are smarter than myself was for a decline of only 100,000 jobs in March. Now, I would like to take this opportunity to apologize for my estimate from yesterday. What I learned today is that the monthly jobs report that I’ve been trading on for many years actually doesn’t correspond to the months of the Calendar, even as indicated in the above headline.

The survey conducted by the Bureau of Labor Statistics is actually conducted around the middle of the month and only reported on the first Friday of the next month, about two weeks later. Therefore, the ~10 million people who recently began filing unemployment claims are not counted at all in the above figure and will only show up in the unemployment rate in a month from now in April’s report.