When a client or journalist would asked me in 2017, what I thought would bring the next wave of crypto adoption my response without hesitation was always India. The urgency and demand for financial freedom in the world’s second largest country by population is simply too large to be ignored. Little did I know just how long it might take to realize that dream.

Less than a year after the government of India abruptly banned the use of cash in the country, in a particularly dark spot in economic history known as demonetization, and during the height of the bitcoin gold rush of 2017 it became clear that bankers in the country would do everything they could to preserve their monopoly on money and payments. So in April of 2018, the central bank of India, the RBI, sent out a notice banning outright the usage of all digital assets.

This is a historic day, not just for India but for the liberty of financial technology. Mati Greenspan Click to tweet

It could not have come at a more auspicious time either…

As we discussed in yesterday’s opening letter, it’s quite clear that the markets have been demanding Fed action in the face of Coronavirus and according to a flash meeting of the top 7 central bankers, they were willing to provide it.

Last night, I did an exclusive live stream on Twitter to explain the news, what it might mean for crypto, and how I’m personally trading it. Feel free to check that out here.

To be clear, the Fed cutting interest rates in the face of an economic downturn is not necessarily a bad thing but the way that they did it, the timing and optics, simply reek of desperation and borderline panic at a time when the world could really use some stern leadership.

On that note, the market is certainly breathing a sigh of relief after Super Tuesday as the level headed yet forgetful Joe Biden made huge gains against the radical socialist Sanders.

When will the Decoupling Come?

Today, if we will it.

As we’ve been discussing, bitcoin has been trading a lot like a risk asset lately and ever since the outbreak of Coronavirus made the leap from China into an international issue, Bitcoin has been mirroring the stock indexes, almost exactly.

In light of the two above featured stories, I believe that the timing is right for the two to part ways. I hope there’s no need to reiterate the usual disclaimers, especially when making forward looking statements that I cannot tell the future or anything like that but the timing does seem right to me.

Again, this is something that we’ve laid out on last night’s live stream much better than I could possibly write to you here in a brief newsletter. So if you haven’t already, please check out the stream now at this link. 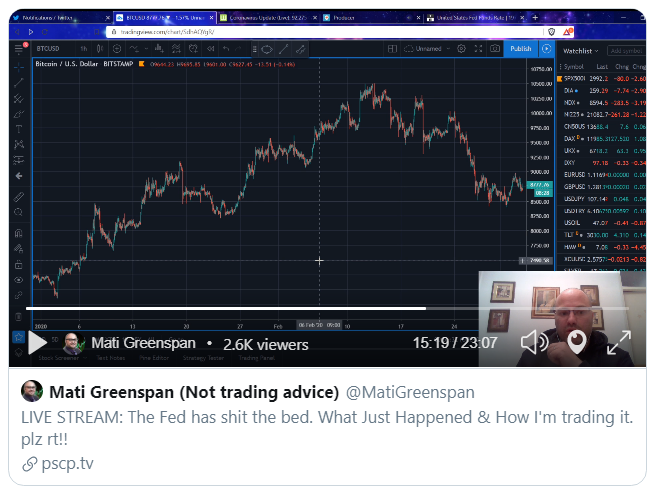