In the aftermath of the great financial crisis, the investment landscape across the world had been completely shaken, and financial institutions were really on the ropes.

A pivotal moment that brought them back to life came in August 2011, when billionaire investor Warren Buffett announced a major purchase. 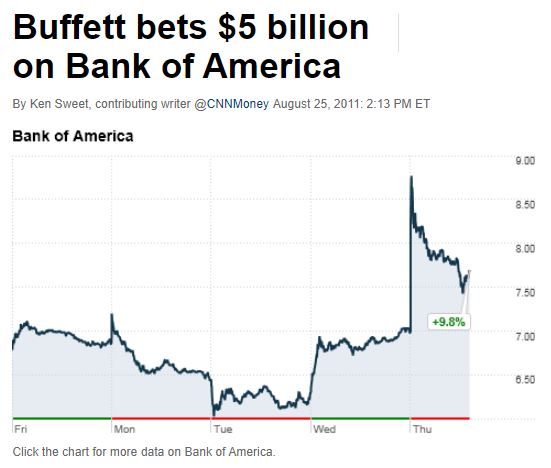 As we can see on the chart above, the confidence that was instilled in the market was so great that shares in Bank of America and other financial firms surged almost instantaneously on the announcement, giving Buffett an instantaneous return on his investment that I don’t think was intentional.

However, after seeing this great impact that he’d had on the markets, he had the desire to do more of these same activities.

After talking up the prices of just about everything else in his portfolio at the time, I recall a live televised interview with Buffett a few weeks later, where it seemed almost as if he was intentionally trying to influence market prices.

It was like a great reveal, where the anchor promised that as soon as they came back from the commercial break, they would announce Buffett’s latest stock purchase.

The stock was IBM, and I recall that they put up a live chart as he announced it in order to display the change in price. A funny thing happened though. The price didn’t budge. It was as if he’d abused his power and the market had become completely complacent.

Fast forward to nearly a decade later. With the rise of social media and changing perceptions across the globe, and after missing out on many technological innovations including bitcoin, Buffett no longer commands the same credibility that he once did. The players may have changed, but the game remains the same.

The richest man in the world, Elon Musk, has rode a rocket to fame and great wealth on the idea that we need to treat our planet better and eventually become an interplanetary species.

These are some very popular notions indeed, and they are perfectly investable narratives. After managing to promote his own company to completely ridiculous and unrealistic valuations, it seems the new billionaire is now dabbling in other markets, namely those involving cryptocurrencies.

Last week, we saw Musk change his Twitter bio to the hashtag #Bitcoin, with an accompanying tweet saying that it was inevitable.

The market went for it hook, line and sinker, taking the price of BTC from near the bottom of its wide range (approximately $30,000 to $40,000) all the way up to the top.

This morning, after a brief tweeting hiatus, Musk has sent no less than five tweets about the alternative crypto Dogecoin, including this gem. 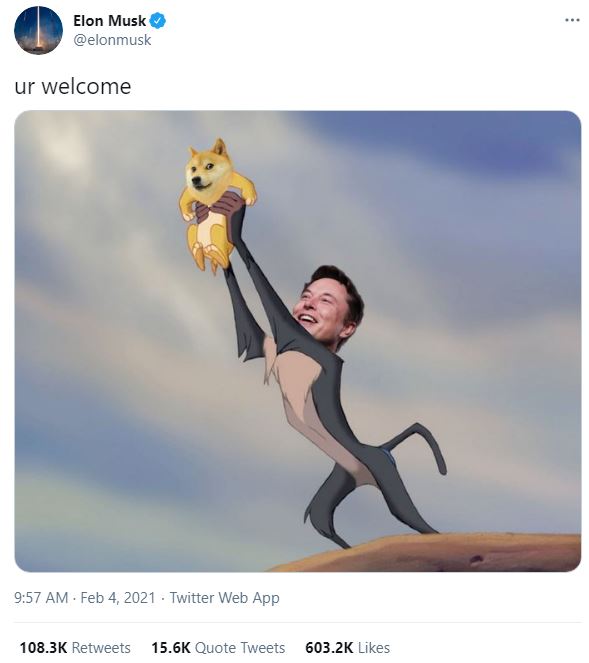 This isn’t the first time he’s tweeted about Doge. We can recall that his well-monitored Twitter bio has in recent history featured things like “CEO of Dogecoin” and then later that day “Former CEO of Dogecoin.” Mati Greenspan Click to tweet

Unlike Buffett, Musk has managed to tap directly into our collective psyche with the power of memes, and his memes are extremely powerful. However, like Buffett, the effects of his attention do seem to be wearing off.

Doge has picked up a lot of momentum since his first social engagements, and the digital asset gained more than 3,000% since. Yet today, after a lot of concentrated efforts, we saw only a modest pop of around 60% before it began retracing the gains.

Don’t get me wrong, I do believe in the power of memes, and I was a fan of Doge long before Musk crashed the party. Further, I hope the digital currency does get to $1 someday.

Another major difference between our two respective stories is the economic backdrop. As we pointed out in the intro, Buffett’s support of Bank of America came at a time when confidence in investments was in the doldrums. Today, however, the market and investing environment is experiencing unprecedented momentum, and that makes a huge difference.

In this chart, featured in yesterday’s Felder Report, we can see that speculation in the markets right now is at unprecedented levels when compared to the actual size of the economy. 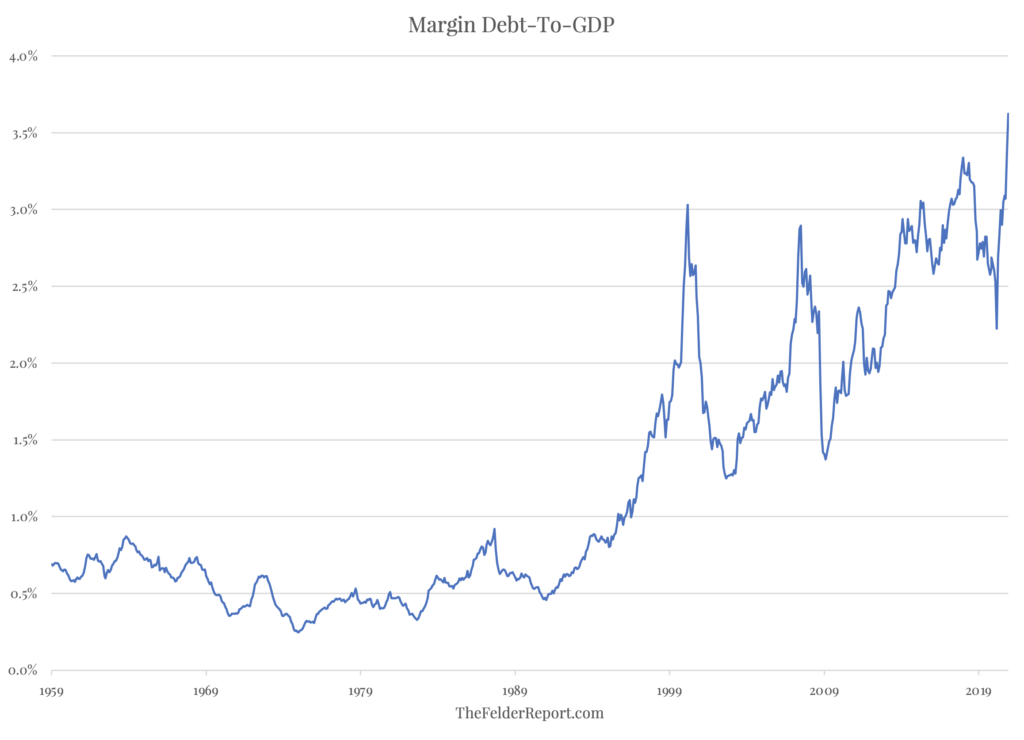 Does this mean that the party may soon be ending? According to Felder’s last few blogs, it certainly seems so, and we know that each time the above indicator has peaked, it did indicate a market top.

However, as we know, past performance is not necessarily an indication of future results. No doubt there have been times when this chart has peaked. but then continued to go higher.

Guess we’ll need to see how this plays out.