Today is a great day for equality, as a woman has just been tapped to lead a major Wall Street bank for the first time in history. Mati Greenspan Click to tweet

The news came in just as Christine Lagarde, president of the European Central Bank, was holding a press conference and doing a fair job of bolstering the euro.

During her speech, the EUR/USD rose by about 50 pips, which some of you know is the smallest possible movement in the foreign exchange market. This does look pretty impressive on the short term chart (left) but when you zoom out a bit, we can see that’s it’s hardly a significant move. 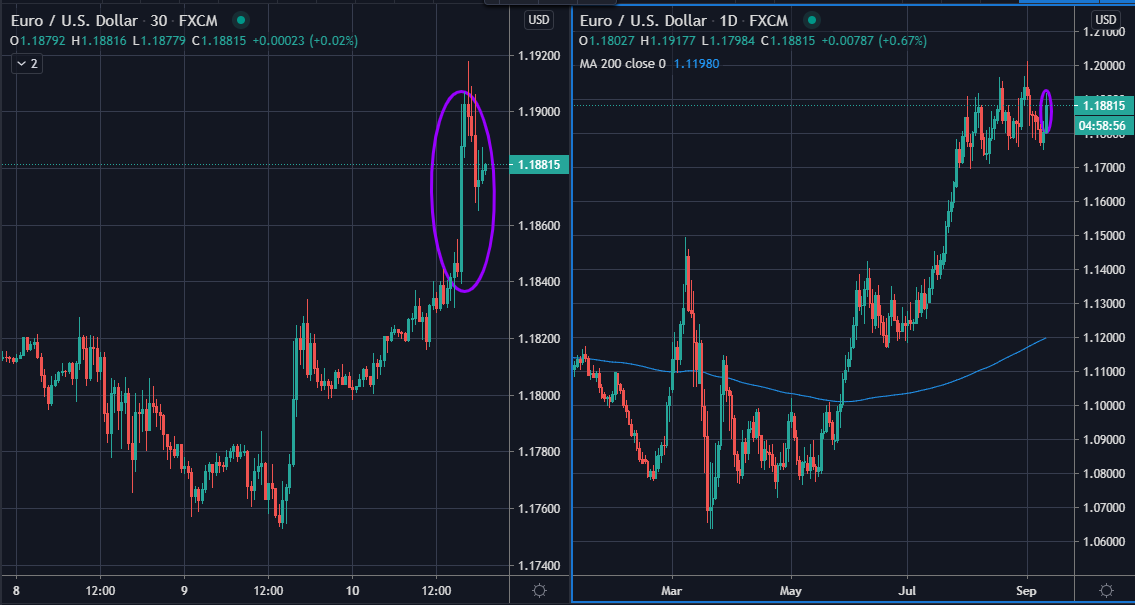 The euro has made some fairly strong gains against the greenback over the last few months, and several journalists did prod Lagarde regarding what her plans might be to push the single currency back down.

She seemed unwavering, as if to say that they welcome the additional confidence in the eurozone and have no plans to intervene in the currency market for now.

Indeed, a healthy rise up to 1.2000 doesn’t seem too extreme. However, if things do get out of control and we see the euro rising even more, especially in the short term, it could present a problem for price stability, and not just for Europe.

Let’s just say that a significant move beyond 1.20 in the near term would represent a serious depreciation of the U.S. dollar, a movement that could have horrendous ramifications for the global economy.

A move in the opposite direction also wouldn’t be too good though, as a U.S. dollar surge right now would no doubt catch many investors off guard.

Stock markets started the day well, but they seem to have taken a turn for the worse within the last hour or so.

At this point, it will be difficult for the major U.S. indices to close in the green. More likely we’ll see some mixed results as we search for some kind of directional narrative to latch on to.

Crypto doesn’t seem to have gotten the notice though, as almost all of the major cryptocurrencies are flying today, with the exception of maybe tron, which seems to be bucking the trend lately.

Though bitcoin is firmly in the green, it doesn’t seem to be in much of a rush. $10,000 a coin is a very central level for bitcoin, and it seems to make sense for reasons we’ve stated many times in the past. It’s just a comfortable level for bitcoin. Good vibes, you know.