There are only a few moments throughout history where a single idea or simple invention changed everything forever. The Internet was one of those things, and only a few decades later, blockchain had a similar impact.

Neither of these two innovations changed things instantaneously though. Like most great progressions, they happen slowly, and can take time for humanity to realize the full potential.

This week, we’ve seen a massive step forward for all digital assets, as Visa and Mastercard have both announced that they are embracing digital currencies.

Oddly enough, I don’t see any major headlines on this. You’d think that Visa and Mastercard’s endorsement of digital currencies would be big news.

However, we now know why they pulled out of the Libra Association. One can only imagine the conversations in the high level board rooms of the two payment giants after a slick David Marcus revealed the power of crypto, and they just had to get onboard.

Then, imagine the conversations that took place at their next quarterly meeting after the Libra white paper was released, and they realized that they don’t really need Facebook to get involved in this market in a meaningful way. Then, all the executives started stacking sats from then till now. Wow!

Bitcoin and blockchain are agents of freedom.

The weekly jobs data came out today in the U.S., and the numbers were downright ugly. At this point, we’ve become accustomed to hearing reports of more than a million people filing for unemployment every week, but until now, the headline number had been getting incrementally smaller ever week.

Today’s report of 1.416 million new claims was the first time since the start of the pandemic where the number actually grew from the previous week (1.3 million). Here we can see it on the chart.

In a strange way, I was actually expecting the markets to rally on this news. No doubt U.S. politicians are looking at this data and realizing that they need to hurry their necks into a resolution and close a deal on the next stimulus package.

Unfortunately though, and rather uncharacteristically, the main indices are down so far today.

Tesla’s earnings were off the charts last night. Analysts were expecting to see a loss of $0.02 per share, but instead saw profits of $2.18!!

This is also Tesla’s fourth consecutive profitable quarter, which means they’re now eligible to enter indices like the S&P 500. Looking a bit deeper into the numbers though, it does appear that a large part of these blowout profits, especially during the lockdown period, was due to them cleverly selling $428 million worth of tax credits. Obviously, this is not a sustainable model.

Twitter is also crushing it today, having risen more than 6% after its quarterly report, almost as if the hack never happened. 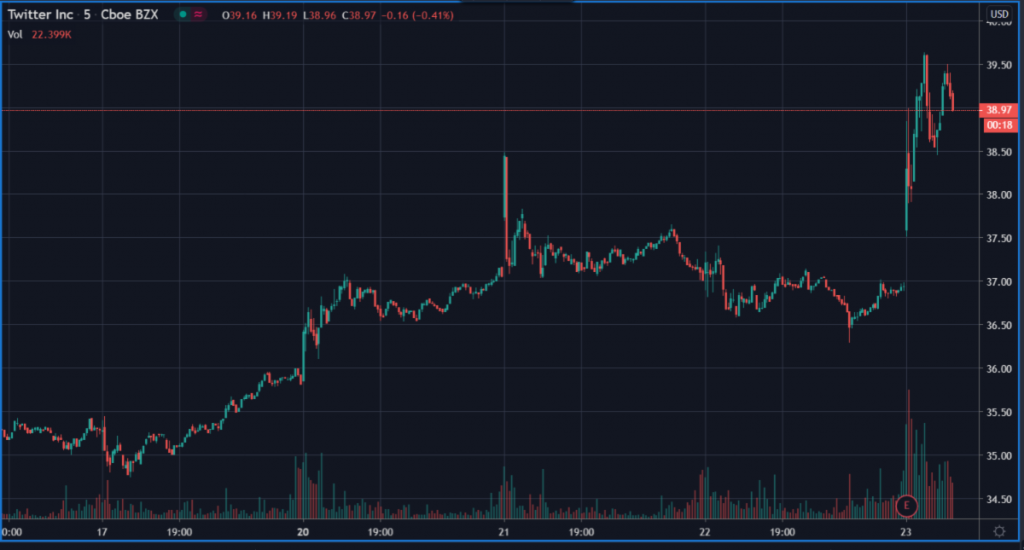 It’s also worth noting that gold has forged a fresh high and is now a stone’s throw away from its all-time high.

After more than a month of relatively flat price action, bitcoin is stirring once again. Mati Greenspan Click to tweet

As a matter of perspective, it can probably be seen that this entire period was actually a consolidation, in which bitcoin fell at the same pace as the U.S. dollar, because as we know, the greenback is now falling fast, especially when measured against other financial assets like stocks.

In this graph, we can see that bitcoin has now very timidly crossed above $9,500 per coin, lightly breaking the upper barrier of the current well-developed wedge.

Hard psychological barriers (not highlighted on this chart) can be clearly observed at $9,000 and $10,000, so it stands to reason that the halfway mark between those two is quite significant.

The upper level of the wedge, however, is up for interpretation. It’s pretty clear to all that it is a descending line, but every analyst will draw it slightly differently, making the resistance poorly defined.

In other words, it will be very difficult to tell when the wedge is broken. 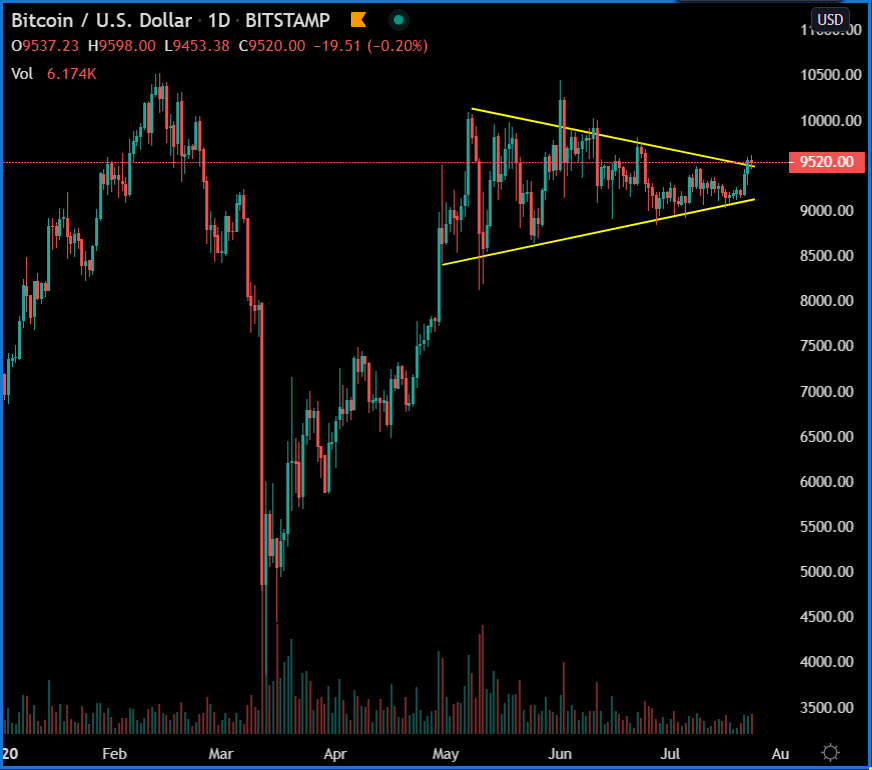 The fundamentals are all on bitcoin’s side. Thus, a strong push above the yearly highs, say another 10% price increase or so, would basically obliterate all resistances between here and the all-time high of $20,000.

A very bullish case indeed, but also not too unlikely given the current situation and the implications of the massive news above.